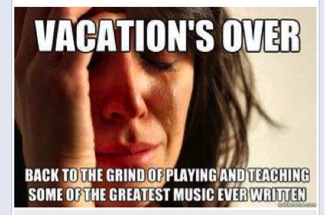 Musical Chicagoans have emerged from their holiday slumber with mixed feelings, and frankly we don’t blame them.
As our friend Drew put it, there’s just no easy way to do January. It’s cold, it’s dark, and your husband made you take the Christmas tree down two weeks before you were emotionally ready. There’s only one thing that’ll get you through it: concerts. Especially concerts in warm greenhouses filled with green, living things. That’s right: it’s time again for Amidst Lush Plantlife, Chicago Composers Orchestra’s second annual romp at the Garfield Park Conservatory, happening this Wednesday night.

In the non-greenhouse show category (please, no booing), Third Coast Percussion is in town for a show at University of Chicago on Friday, and on Saturday the NbN Trio presents AMBEDO to cap off their High Concept Laboratories residency.

Did anyone else hear that re-run of This American Life called “Mapping”? With the story about the guy who researched the emotional quality of intervals? He discovered that the combination of his office heater, computer motor, and phone dial tone created an unhappy pitch cluster that (he believed) was contributing to his bad mood at work. It’s simultaneously a really dumb idea and a somewhat interesting one. We hate musical pseudo-science as much as the next gal, but it’s not every day that This American Life nerds out about tritones. (Best pop culture discussion of keys/moods ever: below, obviously.)


Before the break, we enjoyed this lively behind-the-scenes post by Chicago Civic Orchestra violinist Katie Klocke. CSO artist-in-residence Yo-Yo Ma is, apparently, helping to mount an unconventional performance in which Civic will perform Beethoven 6 under a tree, from memory. (This is in the spring, of course; they don’t treat Civic musicians THAT badly!) Ma’s presence in Chicago is deeply felt and enthusiastically received. But are we alone in feeling like a cranky old lady seeing all these twenty-two year olds getting on a first-name Facebook basis with “Yo-Yo”?

Scratch That is probably very late to this party, but we’re really excited about The Yard, a sassy and vibrant Juillard student-run paper and website. While the paper is admittedly focused on a very small demographic–that is, music students at Juilliard–it also has a broader mission to “serve the next generation of performing artists.” The paper has a very able crew of comedy writers who are creating a body of satirical work to rival The Onion, as well as insightful columns from young performers and a brave article about Fashion’s Night Out in which the author confesses to having left her bra at Michael Kors. The whole thing is a fun, exciting development in musician-centered media and we need more sites like it.

A lot of our friends are getting knocked up. Oh, yours too? Are any of them freelance musicians? Nope, ours neither. We’ve been thinking a lot about the challenges of having kids as a musician. Google doesn’t yield a lot of encouragement, but there is this piece about (rock/pop) musical mamas. And this article about the benefits of being raised in a frugal home. So it’s a good thing! Low income is a good thing, right!?!

As Chicago braces for a freezing cold start to this new year, let’s pretend the internet doesn’t exist and email is an impossibility. Imagine that I bundled up and trudged all over the city to visit these Chicago musicians in their natural habitats: meeting Julia Filson for a drink at The Aviary, running into Cliff Colnot at an Esperanza Spalding show, or visiting Hans Thomalla in his studio as he worked with a young composer. Picture Andrew Nogal drinking the best possible coffee before getting to work on some new reeds; imagine Mike Junokas fusing electrical wires together in Wicker Park. There’s a lot of fascinating work being done by musicians in Chicago, and behind that work is a group of fascinating people. I picked an eclectic bunch and asked them what they loved about 2012 and where they’re headed in 2013. I learned that most composers don’t like to make resolutions. But as we embark on a fresh set of months, I think you’ll be inspired by these reflections–and the good-looking headshots.

I wrapped up my last article with a comment about new music coexisting with the music Austin is most well known for; namely the blues, Americana, indie rock, and country twang that have filled the bars and clubs of Austin since forever. Venues like Antones, Armadillo World Headquarters, Continental Club, and the juggernaut festivals South by Southwest [1] and the Austin City Limits Festival (not to mention the original Austin City Limits show) have served to spread the sound and style of Austin music, as well as the general vibe of the place; one built on organic growth that was equal parts cheap rent, cheap beer, complete indifference to upward mobility, and an odd hippie/cowboy dichotomy that Austin’s favorite son, Willie Nelson, helped foment in the mid-seventies.

While these venues, styles, and festivals have garnered the lion’s share of interest and publicity, a lower profile and largely behind-the-scenes group of composers, performers, and curators have quietly developed a burgeoning independent new music scene amid the glitz and glamour of the national players–and in some cases these new folks have infiltrated the national scenes. In particular, the last decade has seen a number of significant groups, festivals, and events pop up here in town that share little with their popular cousins except a zip code, and my plan for 2012 is to feature these groups in and around Austin as they ply their wares.

Fusebox “End of Year” 2011 from Fusebox Festival on Vimeo.

Among these is the Austin New Music Coop, a group of musicians dedicated to bringing new music to a different and diverse audience. Since forming in 2001, ANMC has featured dozens of premiers and hundreds of new works, including “a commission of a program-length work by Berlin-based American composer Arnold Dreyblatt, a realization of John Cage’s Songbooks, music for the extinct instruments of Luigi Russolo, Pauline Oliveros’s Four Meditations for Orchestra (with the composer in attendance), a three-day series of the works of the New York School, and Ellen Fullman’s Long String Instrument Performance at Seaholm Power Plant.” A multi-day performance (and detailed audio and video recording) of the late British composer Cornelius Cardew’s The Great Learning is ANMC’s most recent large-scale undertaking, and it will be featured in an upcoming podcast by yours truly.

Ten Pounds To The Sound and the No Idea Festival (both curated by Chris Cogburn) have created an environment for improvisation to flourish in and around Austin, as well as nationally and internationally. Featuring a variety of group, solo, acoustic, and electric performances, their concerts display a wide range of improvisational styles and voices, and have fostered fruitful long term relationships among the participants. The ninth annual No Idea Festival promises to be the biggest ever with an international roster of artists and shows and workshops in Austin, Houston, and San Antonio.

The Golden Hornet Project has its roots in the Golden Arm Trio and Brown Whorenet groups that came together around the end of the 1990s. Initially featuring post-punk and free improvisation in a number of haunts on Red River Street, Graham Reynolds and Peter Stopschinski (of the two groups, respectively) eventually joined forces and have since made a significant mark on the Austin music landscape, in the area of new music and otherwise. Live performance, film music (live and recorded), orchestral, chamber, jazz, dance, opera, and a number of cross-over varieties have been part of the ground covered by this group. The recent Symphony VI concert (the sixth of a sorta-annual orchestral show) was named “Best Symphonic Performance of the Year” by the Austin Critics Table, beating out performances by the Austin and University of Texas symphony orchestras. This is “new music notable” in that both sold-out shows were organized, rehearsed, and performed without the typically large and long established infrastructure normally required for such undertakings.

New music groups across the nation and around the world will celebrate John Cage’s centenary this September 5. In Austin, “Happy Birthday Mr. Cage” will continue its second decade with another evening-length program of Cage’s works curated by the Austin Chamber Music Center’s Michelle Schumann. This event has become an Austin favorite, partly because of Cage’s notoriety outside of musical circles (which is to say that a similar concert of Partch might be of interest to a smaller and more music-centric community given Cage and Partch’s relative blips on the cultural radar) and partly because Austin cottons to the unusual. When 4’33” is performed, it’s funny to watch a few of those “in the know” roll their eyes at the performance of Cage’s “hit.” It’s not because of the content or concept of the piece, mind you. It’s because these people want the deep cuts, and Schumann delivers.

Not everyone got their start during the last administration. Newcomers Revel came on the scene in 2009, and since then they’ve produced dozens of concerts as well as a CD of early 20th-century works. Based primarily in Austin (with occasional performances in New Mexico and points in between), Revel’s mission is to provide an audience experience disconnected from the formality of traditional concerts.

Fast Forward Austin will celebrate its second anniversary this spring with another day-long festival featuring local and national performers, including headliner Vicky Chow of Bang on a Can All-Stars fame. Last year’s inaugural festival was a huge success and featured a wide variety of music, improvisation, and dance.

Very few of these shows will be held in conventional venues and none of them will be targeted at traditional audiences. There won’t be many ties, clasped hands, or perfectly motionless audience members. There will be lots of people who don’t know what they’re in for, and that’s why most of them will have bought their ticket. They want something new, and they’ll find it here in Austin.

1.     One of my favorite parts of SXSW is walking through downtown a month or so after the festival. Here you’ll find recently relocated hipsters (who have made the move to town based on the generally epic spring weather in Austin) sweating through their skinny jeans as the Big Sun takes up its six-month residency