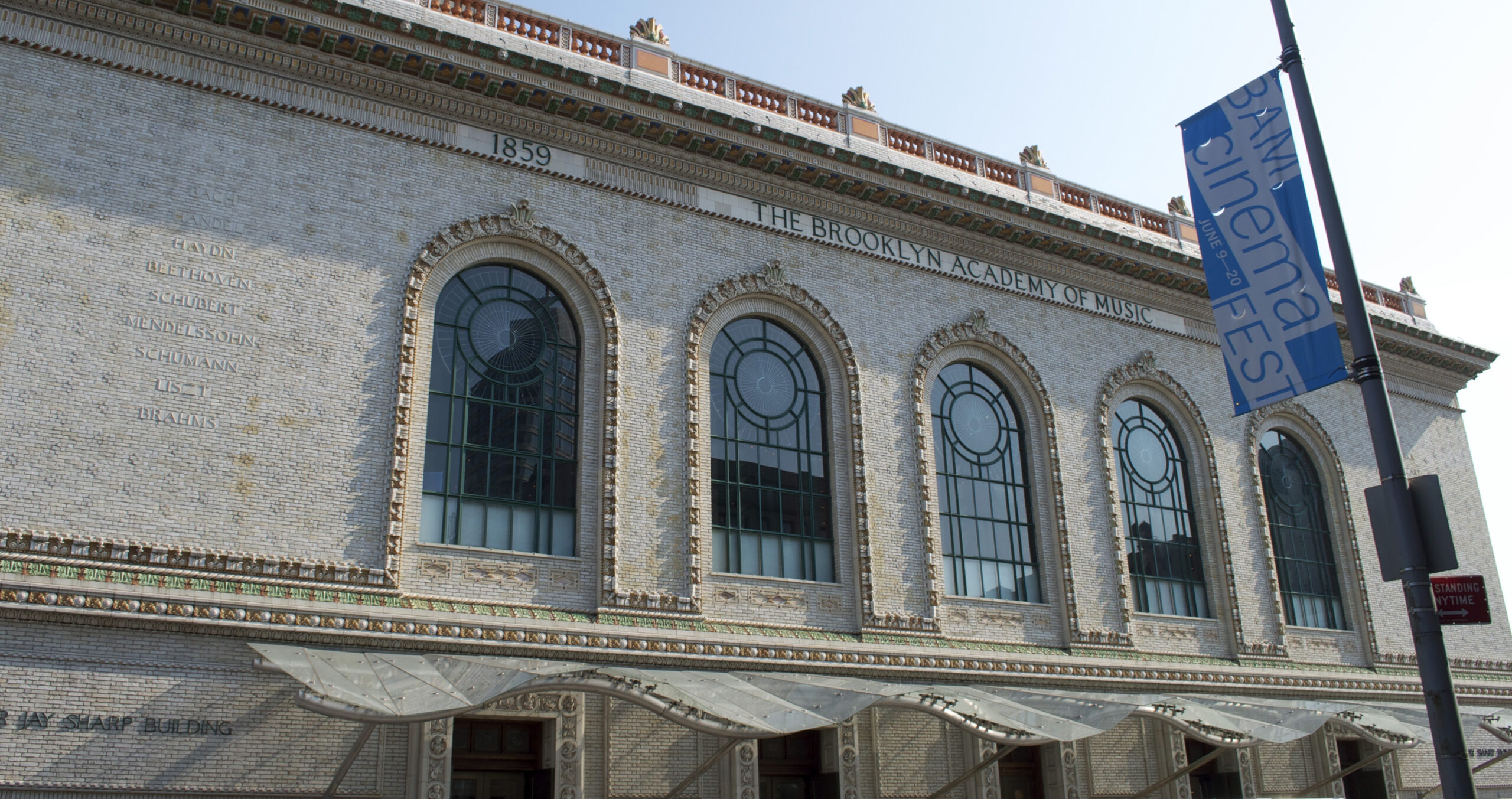 A 1982 advertisement for Cutty Sark whiskey placed Philip Glass above a scotch on the rocks. Composers aren’t the usual suspects for hard liquor ads, so why is Glass here? Glass recently admitted in his memoir that he agreed to do the ad because he needed the money ($15,000) to fund making the orchestra parts for his opera Akhnaten (1983).[1] Still, a more intriguing question remains: why would the image of Glass appeal to the target consumer of Cutty Sark whiskey? A brief biography in the ad reads, “Success hasn’t made Glass any less of a maverick.” Like the designers of this ad, critics and scholars generally view Glass as the sole agent of his popularity, operating outside of traditional musical institutions as an iconoclastic “American maverick.”[2] 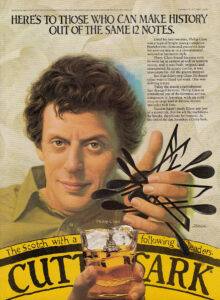 It is true that Glass had achieved considerable fame working independently of the university, which was the main “institution” for contemporary composers at the time. The ad plays to this familiar image of Glass as a self-made man. Glass rose to fame by his bootstraps: he worked as a taxi driver and plumber to pay the bills. His minimalist music first attracted attention in a subculture of 1960s New York avant-garde artists and audiences, the inhabitants of the lofts and galleries of lower Manhattan. Perhaps the quintessential example of Glass’s maverick persona was when he and theater designer/director Robert Wilson rented out the Metropolitan Opera House on its off nights for the 1976 United States premiere of Einstein on the Beach. Beyond the Cutty Sark ad, numerous biographies of Glass memorialize these aspects of his career and perpetuate the idea that Glass rose to fame on his own without institutional support.

In a previous article in this series, Ryan Ebright noted the crucial roles of Glass’s collaborators in seminal works like Satyagraha. Attributing Glass’s success entirely to his creative iconoclasm also ignores the substantial community of impresarios and patrons who have influenced his work and reception history. Just as the whiskey company co-opted Glass’s image, in the 1980s an emergent network of U.S. arts administrators from presenting institutions such as the Brooklyn Academy of Music and funding organizations like the National Endowment for the Arts and the Rockefeller Foundation used Glass as the poster child for their own set of concerns. These administrators expressed concern with the scarcity of new American operas and the stagnation of standard repertory in major opera houses of the United States. They were further troubled by the fact that American composers like Glass were receiving more attention in Europe; Glass’s first real opera commissions—Satyagraha (1980) and Akhnaten (1984)—came from state-sponsored opera houses in the Netherlands and Germany. These administrators devised a solution that borrowed from the vital world of avant-garde music theater, and in so doing generated an institutional support system that sustained Glass’s opera career throughout the 1980s and beyond. 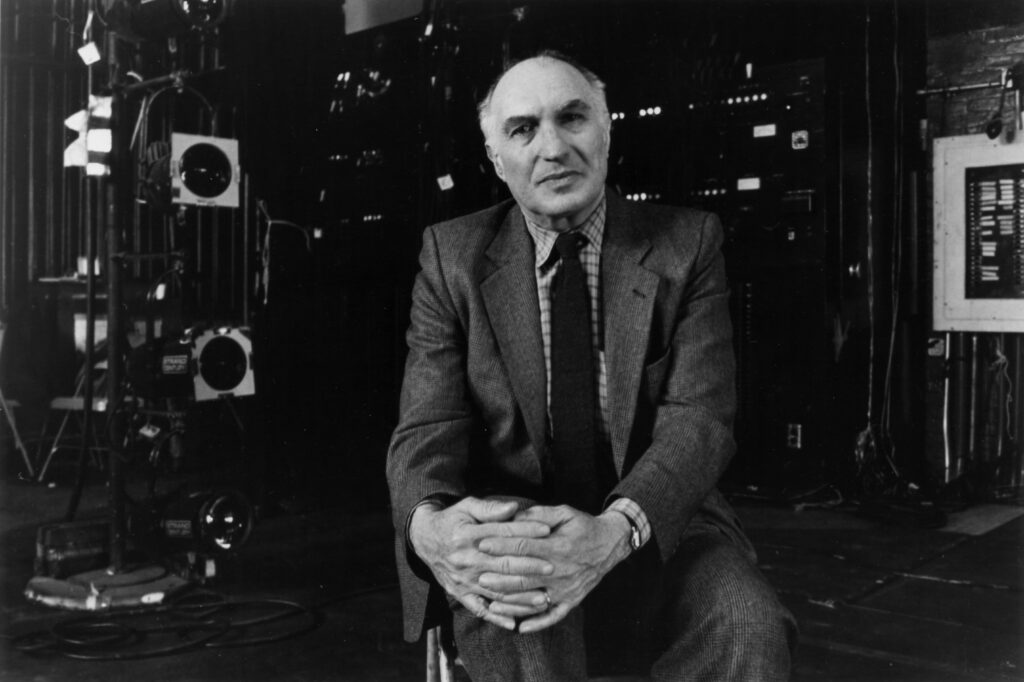 One of the key impresarios who reshaped the American operatic landscape was Harvey Lichtenstein at the Brooklyn Academy of Music (BAM). When Lichtenstein became executive director of BAM in 1967, he refashioned it into a principal center for contemporary dance, music, and theater in the U.S. His undertakings culminated in the Next Wave Festival, an annual two-month program of experimental performances that made him a leading impresario of the avant-garde. One of the most successful offerings of the first Next Wave series in 1981 was the American premiere of Satyagraha by Glass. This production was not a singular engagement; over the years, Lichtenstein consistently promoted Glass, lauding him as a crossover artist whose output could reach a wider audience than the conservative fare offered by traditional opera companies.

Between October and December of 1982, Lichtenstein met with prospective Next Wave funders. He proposed that the festival be the nucleus for a national production program involving multiple presenting organizations. Tours of new large-scale works would expose areas outside of New York to the work of American experimental artists—in particular, those who emerged from the Downtown New York scene. United by their belief in the potential of the American experimental music theater vanguard, the Next Wave meetings stimulated conversation between representatives from corporate, national, and private funding entities and Downtown-affiliated artists and administrators. 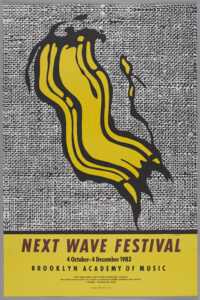 Funding meeting minutes from the BAM Hamm archives offer a glimpse of these pivotal administrative discussions. Meeting attendees included representatives from the National Endowment for the Arts, AT&T, the Rockefeller Foundation, Warner Communications, the Ford Foundation, and presenting organizations—Artpark, Walker Art Center, the Spoleto Festival, and UC Berkeley Arts and Lectures. Guest speakers were Philip Glass and Laurie Anderson. Also present were two key players in the Downtown arts scene: Roselee Goldberg, director of communications for Diane von Furstenberg, Inc. and former director of performances at The Kitchen; and Tim Carr, a Next Wave program consultant who also worked for The Kitchen. Indeed, The Kitchen, a smaller, independent organization, had been a hub for avant-garde music, allowing composers like Glass to organize their own concerts and hosting its own festival, New Music New York, in 1979. The fact that Lichtenstein hired Kitchen personnel to help design BAM programming was a testament to his commitment to the creative output of the Downtown scene. Under Lichtenstein’s direction, Downtown administrators and artists strategized with corporate and other major funders how to amplify Downtown vanguard works in mainstream institutions and festivals like BAM.

Together, the meeting attendees discussed the difficulties in presenting large-scale works in the United States. Although the Next Wave proposal included a wide range of artistic genres, meeting participants tended to draw attention to emerging forms of opera and music theater—especially those represented by Glass. During the meetings, Glass narrated the history of his large-scale works, all of which premiered in Europe and had only received U.S. exposure in New York. He described the issues artists faced when producing new works with U.S. opera companies: a mentality set against new works, which he believed was an educational problem.[3] Lee Gillespie, a director of the National Opera Institute, agreed with Glass’s assessment and urged a strong promotional campaign for new works, citing statistics that the average age of most opera-goers was fifty-three years old and that they mainly connected to 19th-century opera repertoire.[4] The meeting participants believed that active institutional support—not simply money, but the advocacy of influential impresarios, staff, and, eventually, adventurous audiences—was crucial to the survival of new work. For this reason, the Next Wave program had an outreach component: educational materials and symposia for touring productions.

The meeting attendees also agreed that the complexity of innovative large-scale works required new linkages among presenting institutions, artists, and corporations to facilitate the productions. Anne Alexander, staff manager of AT&T, noted that the cooperation of multiple philanthropic organizations was necessary to realize these works in the manner they deserved. After the final meeting, Howard Klein, arts director for the Rockefeller Foundation, indicated that he was prepared to support the program, but its scale required a consortium of funders to sustain it. Other major funders then joined in. Altogether, by 1984, BAM raised about $1.1 million in public and private sponsors. For a complete accounting of the contributions, see below.[5]

In this way, Lichtenstein was instrumental in coordinating an institutional network to support American experimental music. Although this network tended not to include more traditional arts organizations like university music departments and the Metropolitan Opera, its existence nuances the “maverick” label that has so often been attached to musical experimentalists like Glass. Glass was both a poster child for the future of American opera in funding meeting discussions and a staple in BAM programming. Throughout the 1980s, Glass’s operas were featured more often than any other opera or music-theater composer. Perhaps Glass owed whatever moneys he made from the Cutty Sark ad not to his creative iconoclasm alone, but also to his ability to find supportive collaborators—especially in the form of arts administrators. 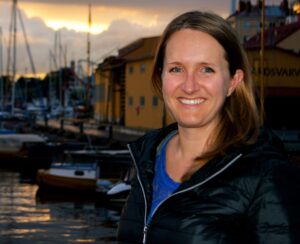 Sasha Metcalf recently completed her Ph.D. in musicology at the University of California, Santa Barbara, where she is now a lecturer in the writing program. Her research examines how institutions and impresarios have shaped the history of late 20th-century American music.