Over tapas and perhaps too much sangria one evening last week, I got into an extensive debate with a friend about whether or not something could “live on” if it was not “great.”

“Only the really good stuff survives. Can you name anything that’s still popular from over a hundred years ago that’s no good?” my friend asked almost rhetorically, pretty much convinced that I would not be able to come up with something to refute his claim.
Even though I completely disagreed with him, I was in something of a bind since I have made it a life’s goal to not think in terms of good vs. bad. If I don’t like something, I’m fully aware that my feelings toward it have more to do with myself than whether or not it is objectively good or bad, and my attraction to things has changed considerably over time. The same seems true for just about everyone else. Therefore to assess something based on its popularity (either among the general public or a small coterie of taste arbiters) holds no validity for me.

If opinion has no role in establishing quality, whether or not something remains popular for a very long period of time cannot be used as a way to prove that it’s “good.” So even though I have no idea what “good” means (nor do I ultimately believe that anyone else does), I decided to play the game just to challenge the notion that what the majority values over time could determine what is worthwhile. Of course if I were to play this game by my own rules, my subjective assertion that something was not good would have no more weight than the weight of that group of many people over time. But, chalk it up to that blasted sangria, I summoned up my own subjectivity in an attempt to refute subjectivity overall.

“The song ‘Happy Birthday’!” I blurted out. “The music is dreadful and the lyrics are utterly insipid. Yet it has undeniably been the most popular song for well over a century and I highly doubt it will ever go away, though I often wish it would.” 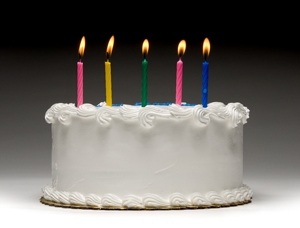 That pretty much ended the debate. However, the following day I received an email from a different friend in response to my previous essay on these pages in which I described my personal realization that my own composing emanated from the same impulse as my writing about the music of other composers—advocacy through communication. For him, however, the “virtue of a piece of music isn’t its ability to ‘communicate,’ but rather its ability to supply a unique experience.” And here’s the zinger:

“No one in new music will ever communicate more directly than ‘Happy Birthday’.”
So then, might “Happy Birthday” be one of the great aesthetic achievements of mankind and might my disdain for it somehow reveal that I’m actually pretty close-minded? Or is my second friend right and might it ultimately not be about communication after all?