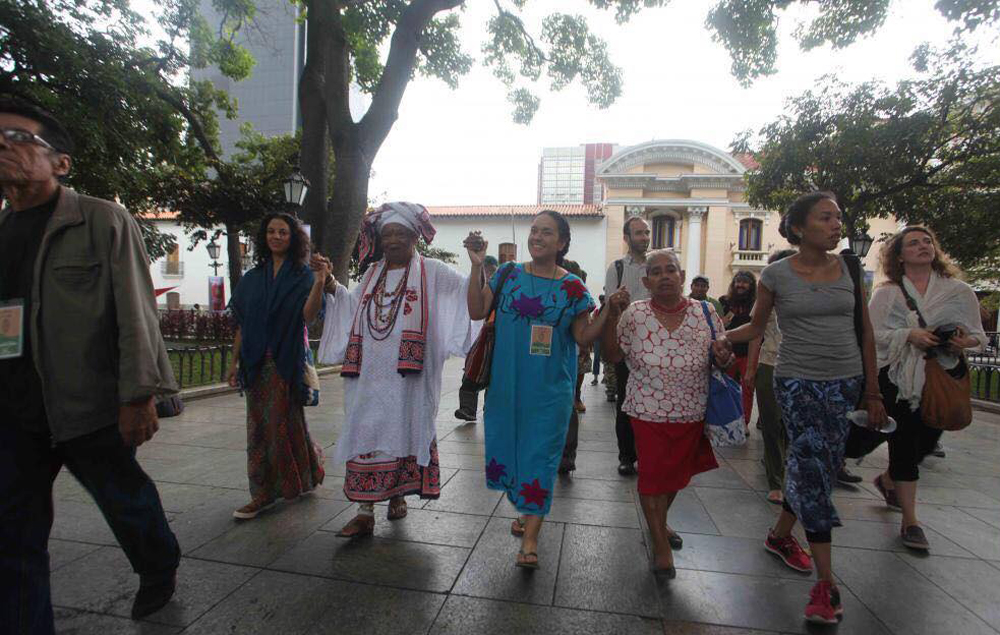 In our day-to-day lives, we may concede subconsciously that idea called reality to be “what is”—the realm of the material. But of course on further examination, we see that what we consider real—and possible—is wrapped up in the intersection of our senses and politics. How we convert our environment, through the sensory mediums of our ears, tongues, fingers, eyes, and nostrils into reality is as political and contested as net neutrality versus corporate control of the internet. That is because, as Marx reminds us, “the forming of the five senses is a labor of the entire history of the world down to the present.”[1] The Nazis banned ‘degenerate’ jazz; the House Committee on Un-American Activities blacklisted the great African American film actor and singer Paul Robeson for his communist politics. In the 1920 and ‘30s, a conservative government in Haiti banned Vodou and ritual music associated with it; musicians snuck it back in to a hybrid form called “Vodou Jazz” and critiqued their neocolonial government.  Indeed, musicians, especially from populations terrorized by the state,  have always been fighting to expand, contest, or even overthrow state-sponsored reality, which has denied their humanity and right to exist. The great free-jazz bandleader Sun Ra explained: “I do not come to you as a reality, I come to you as a myth, because that’s what black people are, myths. I come to you from a dream that the black man dreamed long ago.” (Quoted in Szwed, Space is the Place, 269)

The great baritone saxophonist Fred Ho, inspired by Sun Ra, also fought the colonial occupation of reality and the senses. “Everything that is possible has been tried and failed. We must do the impossible.” In his essay, “How Does Music Free Us? ‘Jazz’ as Resistance to Commodification and the Embrace of the Eco-Logic Aesthetic,” Fred Ho suggests that the way music is produced and consumed today effects the overall health of our society and body politic:

Musical malnourishment, with increasing mono-diets and over-consumption of processed, chemically treated/created culture, entails an over-reliance upon intake from manufactured commodities such as loudspeakers, machines, and computers. Thus greater passivity is generated whereby people no longer look to themselves to make music, but simply purchase it via a concert ticket or through a new electronic home entertainment toy. With declining participation in creative activity comes the musical and artistic deskilling of the populace along with its monopolization by “experts” or marketers (often, with the complicity of academia and corporations, these are one and the same). So we get a listening population which, like the general population, is obese, out-of-shape, unhealthy, and addicted to all the wrong stuff.

What is Ho’s answer? “Prioritize acoustic live performance over electricity-dependent situations. Live performance is a social act in which all people participate and interact and have mutual influence.”

“Live performance is a social act.”

Ho and Ra are not alone in their assessment that a connection between music, sound, history, and representation intersect to create sensorial interpretations of reality that are built for and by the status quo. The French philosopher-activist Jacques Rancière conceived of aesthetics as more than the style or the form an artistic medium takes. Rather, aesthetics are the multiple ways in which any social order establishes, manages, privileges or marginalizes different modes of perception. And this organization of perception—of sense itself—is the site of a centuries-long, world-historical battle for the senses. Rancière calls this the “distribution of the sensible” and suggests that communal forms of perception can challenge and create alternatives to what is allowed to be “visible or audible, as well as what can be said, made or done” within a particular social order (Rancière, J. 2004b. The Politics of Aesthetics , G. Rockhill (trans.). London: Continuum, p. 95.)

In the Afro Yaqui Music Collective, we and a collective of activist artists strive to create music that challenges the matrix of consumerism, racism, and egocentrism that is killing the planet and giving rise to a new generation of fascists. We do this in a variety of ways: we emphasize communal music making but we do not want to “dumb things down.” Indeed, oftentimes our audiences are as musical and cutting edge as us. Rather, we compose music and create rhythmic environments which move beyond the matrix of four beats per measure—that is, the 4/4 time signature. This way of rhythming and dancing, while home to many polyrhythms, is so dominant now it almost presents itself as “what has always been.” Traditional Middle Eastern rhythms covered a wide array of odd time signatures, such as 5 and 7. The overwhelming majority of Bulgarian folk music happens to be in odd meters–typically 5, 7, 9, and 11, with occasional combinations of those creating 13, 15, 17, and larger. Indian classical music uses a system of metrical divisions named talas, with various lengths. One of them is a 29-beat cycle.

We strive to create music that challenges the matrix of consumerism, racism, and egocentrism.

These experiences of time are very political. They distribute our bodies in social ways that have meanings from the dance floor to political rallies to how we subconsciously structure space, time, and architecture. The flattening of the grand majority of Western popular music to a 4/4 time signature represents a kind of genocide that has destroyed or at least marginalized alternative modernities, other ways of seeing and experiencing the world. If we take Johann Wolfgang von Goethe seriously that “music is liquid architecture; architecture is frozen music,” then what does homogenizing life into four sides (a box!) say about our architecture of reality? Prisons, plantations, and factory farms all have square shapes at the center of their organizational geography. Unconicdentally, the hegemony of 4/4 rose in harmony with what scholars at the University of Wisconsin are called the “plantationoscene” in which the rise of the plantation became “a transformational moment in human and natural history on a global scale that is at the same time attentive to structures of power embedded in imperial and capitalist formations.” This led to “the erasure of certain forms of life and relationships in such formations,” as well as “the enduring layers of history and legacies of plantation capitalism that persist, manifested in acts of racialized violence, growing land alienation, and accelerated species loss.” These institutions of discipline and punishment are rigorously reproduced in the music we consume. And thus we must decolonize our rhythmic scape as much as our models of making food, energy, and community.

Institutions of discipline and punishment are rigorously reproduced in the music we consume. And thus we must decolonize our rhythmic scape.

We were deeply moved by this model of a decolonized musical practice and sought to connect ecological solidarity with musical creation and practice. Alongside our collaborative team of Peggy Myo-Young Choy (choreographer), Ruth Margraff (librettist), and Nejma Nefertiti (EmCee), we decided to create a devised work that integrated the political vision, sacred insects, sacred plants, and values of three revolutionary women based in national liberation and environmental struggles: Reyna Lourdes Anguamea (of the Yaqui Nation based in Sonora, Northern Mexico), Azize Aslan (of the Kurdish Freedom Movement), and Mama C (a veteran of the Black Panther Party, now doing community work and homesteading in Tanzania). These three remarkable women became our friends, allies, and comrades as we conducted interviews, workshopped the script, and set the piece to music. Having their voices at the center, rather than as subjects we hoped to represent, made this opera an organic expression of social movements as opposed to a study of artistic colonial anthropology. 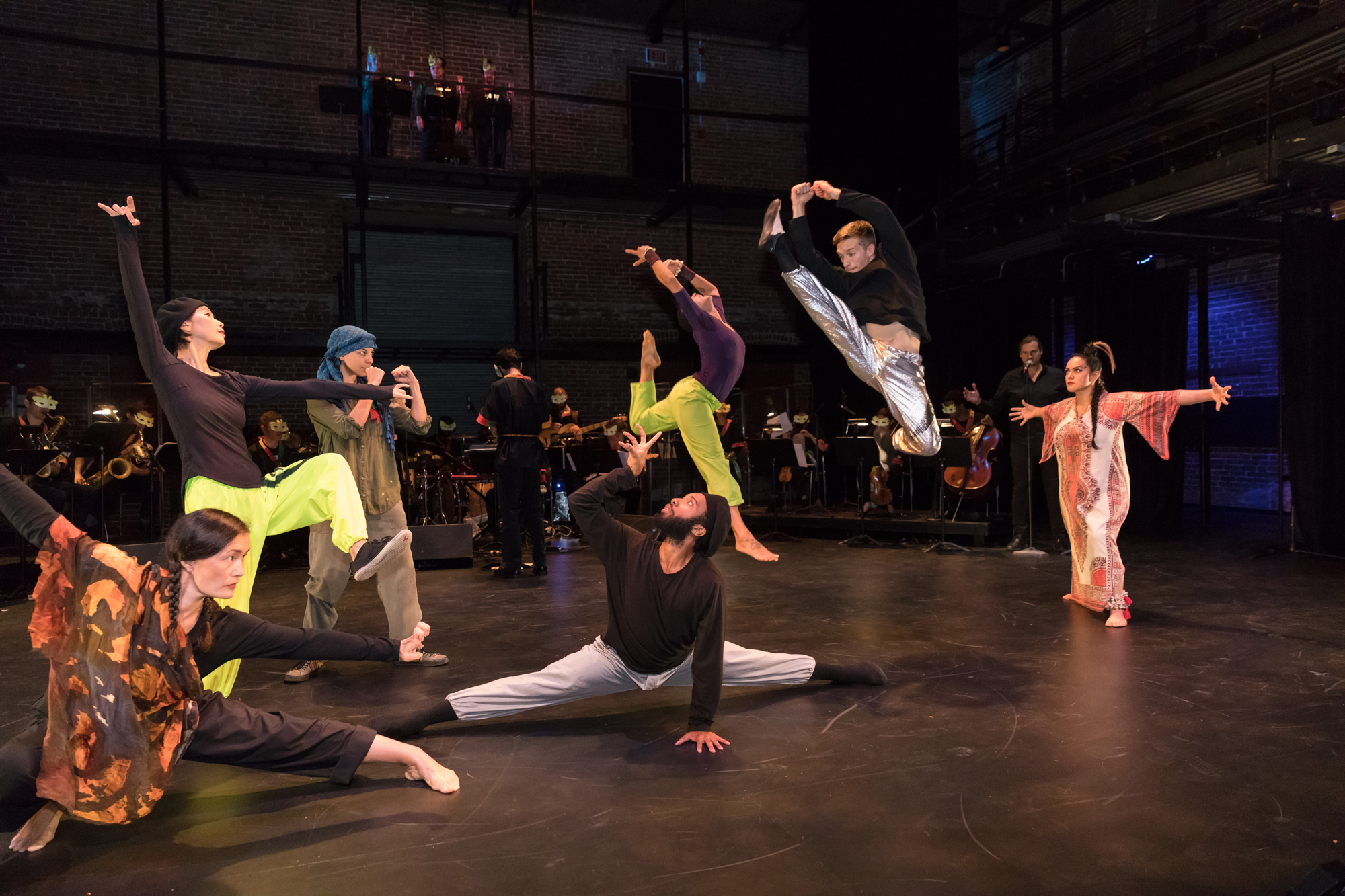 The entire Mirror Butterfly cast and ensemble. Photo taken by Renee Rosensteel and provided courtsey of the New Hazlett Theater.

The music we created did not conform to a rubric of what these places “should” sound like. Honestly, the work held almost no disciplinary consistency. Its opening gesture took the form of a saxophone quartet collectively improvising the creation of both a mushroom network—representing the dynamism and vulnerability of ecosystems—and the Sword, the piece’s antagonist that expressed the ethos and death culture of capitalist patriarchy. The composed sections of the music similarly were unpredictable and iconoclastic: a four-part chorus sang quartal harmony over a pan-African rhythm section including batás, the Ghanaian kpanlogo drum, and Brazillian cowbells, accompanied by pipa and electric guitar. These musicians’ parts asked them to play hemiolas of 4/4 against 15/8, or 4/4 against 5/5, as ways of exploring unity in difference, of shared goals in a common struggle unfolding in different rhythms in different parts of the world. Harmonically multiple key centers flowed in and out of each other constantly, but always with a sense of rhythm, drive, and execution.

Silenced and repressed epistemologies have been often represented in the Western art music tradition, but their practitioners were often not consulted.

In these sonic depictions of liberation against colonial ecocide, we were influenced by the spirit of the emerging global revolution against climate change. This revolution has had historical antecedents of centuries of resistance to colonialism, slavery, and indigenous genocide. These silenced and repressed epistemologies—ways of seeing the world, experiencing difference and identity, understanding the complex dialectic between humanity and nature—have been often represented in the Western art music tradition (by white men), but their practitioners were often not consulted. Therefore we did not seek to employ a “representation” model, and looked instead to a prefigurative one. What energy would evoke a world in which Kurdish, Yaqui, Black liberation activists, and their allies across the globe made poetry, music, and resistance together? Could we create a piece that contributed to the unfolding of that reality? These were the questions that guided our compositional and collaborative process. We will discuss what anticolonial, ecosocialist collaboration looked like in the subsequent posts, and how this project became a tool for connecting dispersed movements with a common goal.