Last week seems so long ago…

Over the weekend, reports of a hurricane slamming into the Caribbean—an unfortunately common occurrence at this time of year—were easy to miss. As it moved up the coast, the media dubbed it a “Frankenstorm”, a moniker that, while technically accurate and clever, failed to impart the true nature of what was to come. By late Sunday and early Monday, Facebook and Twitter gave those of us living away from the Eastern seaboard the impression that our friends on the coast were cheerfully looking forward to riding out the storm with variations of hurricane-related cocktails and selections from Netflix. As Hurricane Sandy and the various weather systems that converged on the eastern half of the United States began to unleash their power, it still didn’t seem all that bad from our vantage point in western New York. (The 60+ mph winds that were buffeting us off of Lake Erie that night are not exactly rare here in the Snow Belt.)

It was, indeed, that bad.

As power was (and still is) out for much of New York and New Jersey, it has taken some time to begin to piece together what effects Hurricane Sandy has had on the new music community, but here’s what I’ve found out so far:

New Amsterdam Records had recently moved into their new 3000 square foot headquarters in Red Hook, but from the following report by co-founder Sarah Kirkland Snider, these headquarters sustained massive damage from the storm. Quoting from her Facebook page:

“Our new New Amsterdam HQ in Red Hook was totaled by Sandy. The water mark is over 4′. We had moved much of the office to higher ground prior to the storm, and elevated everything else, but we still lost all files/paperwork, a hard drive, some furniture, vintage synthesizers and music gear, and most of our CD stock. Our landlord does not have flooding insurance, and our attempts to acquire it before the storm were denied. There is some talk of FEMA helping uninsured Red Hook businesses, but that seems like a long shot. Stunned and heavy-hearted we are.”

I spoke with William Brittelle, one of the other co-founders of New Amsterdam Records (along with Judd Greenstein) Thursday morning about the situation. He spoke about being disheartened when they first explored the damage (in the dark, of course) and about having to leave the premises soon after for fear of being overcome with fumes from bleach, paint thinner, oil, gas, and other materials that made up the four foot-deep noxious soup in their headquarters while buses and overturned boats floated in the street outside. Brittelle was also amazed by the outpouring of support that Snider’s Facebook post garnered, speaking of the hundreds of people who had contacted them with offers of help and of the “fabric of relationships” that were helping the NewAm organization get through this ordeal.

New Amsterdam Records has created a page on their website for anyone who wants to help support them in their cleanup efforts. From that page:

“Despite the many hours we spent on Sunday preparing for the storm–stacking furniture on cinder-blocks and moving everything we could to higher ground–our space was flooded with almost four feet of polluted sea water. As a result, about 70% of our catalog of CDs has been destroyed–CDs we hold on behalf of our artists (we do not own them). Literally ALL of our financial records were destroyed, including our back-up hard-drive. Sewage, gas, spilled paint thinner, and bleach all blended with seawater, creating a toxic mess. A mess that is sure to corrode our newly installed drywall, kitchen cabinets, and office furniture. Musical equipment, amps, and priceless vintage synthesizers were also destroyed, along with countless personal items, clothing, two sofas, records, and other furniture. Thankfully, our donated Steinway grand piano dodged the bullet, as it was wrapped in a huge plastic tarp; the water mark from the flood was drawn literally inches from the piano’s lid.

Over the last few months, we’ve invested countless hours preparing our space, and thousands of dollars renovating it — money and time we were hoping to make up for with a series of public events and private fundraisers this fall and winter. Now that plan is in severe jeopardy. Our financial future is intimately tied to our space; we were “all in,” so to speak. After sharing news of our plight on Facebook, literally hundreds of you have offered to help. The outpouring of love and concern from our larger community has been staggering and truly inspiring. At the suggestion of a number of NewAm friends and artists, we have decided to create this page—an official home for our Hurricane Relief Fund. If you would like to donate to our recovery effort, please click the link below. You donation will be fully tax deductible, and will be returned with heartfelt thanks and supreme gratitude.” “Westbeth Artists Housing, my home in the West Village of New York City, has been severely damaged by Hurricane Sandy. Nine feet of water flooded the basement, destroying the boiler, oil tank, pumps and electrical equipment. Music studios, musical instruments, sculpture studios, metal-working and wood-working studios in the basement are literally gone. Some artists have lost a lifetime of work. Currently there is 5′ of water standing in the basement.

All performances and exhibitions, including the Westbeth Gallery, Martha Graham Dance, Brecht Forum, are canceled until further notice.

There is no power, water, heat in the entire building. No elevators. Tenants are using candles and flashlights to navigate the pitch black stairwells and hallways. Neighbors are checking on one another, going from apartment to apartment, paying close attention to the elderly and disabled tenants.

Oil and gas fumes are apparent throughout the building, from the gas and oil from flooded cars on surrounding streets and the damaged oil tank in the basement. It is likely that even after power is restored to the neighborhood Westbeth will remain without power as the transformers in the basement were also flooded.”

The Kitchen is rescheduling concerts because of reported damage to their theater space.

Newspeak reportedly had members flooded in, and had to postpone their concert at the Atlas Performing Arts Center in Washington D.C. Newspeak founders David Little and Eileen Mack sent this in:

“As a result of hurricane Sandy, Newspeak and the Atlas Performing Arts Center made the decision to postpone our November 2 show. Initially, we were hoping that we could make it work, but it became increasingly clear that getting everyone in the band together for our last couple of rehearsals, or even to rendezvous to drive to DC would be almost impossible. Our eight band members all live in different parts of the NYC area–Brooklyn, downtown, the Heights and further afield–and looking at the hard facts of the situation, it didn’t feel like we could safely make it work. But we’re talking with Atlas now to find a new date, so stay tuned!”

Bargemusic, with its dockside location, seems to have survived the storm with relatively minor damage.

Many concerts were forced to cancel or be rescheduled—a good list of those in NYC can be found here at WQXR’s website.

An example of one of those event reschedulings occurred in Baltimore. After having just raised almost $10,000 in a Kickstarter campaign, Judah Adashi’s Evolution Music Series opening concert featuring the music of Kaija Saariaho had been scheduled for Tuesday night, but out of concern for the performers and audience the concert was rescheduled for November 28.

Even with one of the worst storms to hit the area in recorded history bearing down on the East Coast, some composers kept working sans electricity, as can be seen here in Mohammed Fairouz’s candlelit studio: 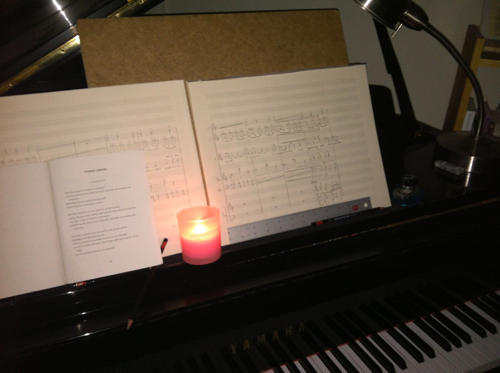 I’m sure that many more effects from the storm will be revealed over the next few days and weeks. The flight cancellations alone will have a ripple effect for quite some time, with many composers and performers unable to travel to or from their concert and festival destinations. In the meantime, it is important to point out how much this event highlights the delicate situation many composers, performers, and new music organizations are in; with concerts being rescheduled or cancelled, electricity being scarce for many along the east coast, travel being next to impossible for many communities, and communication lines tenuous at best, the ultimate ramifications of this week’s weather event, while unknown, will most likely be felt for quite some time.