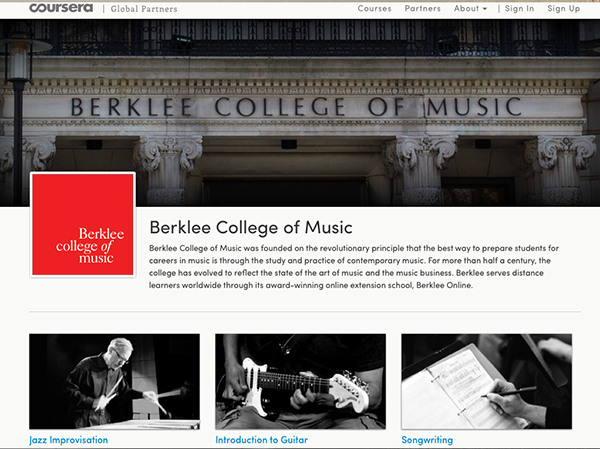 I first heard about Coursera a year ago when I was carpooling to a gig with my friend Kate. She told me about a personal finance class she was taking. The class was free, the course materials were really great, and she was attending every Saturday.
“Oh wow!” I said. “So where’s the class?”

Turns out, the class was online. Kate was enrolled in a MOOC (Massive Online Open Course) at Coursera, one of the internet’s largest providers of online classes. Although I didn’t know it at the time, MOOCs are one of the biggest hot-button acronyms in education today. They’ve been hailed as both a revolution in access to information and a harbinger of corporatized educational doom. 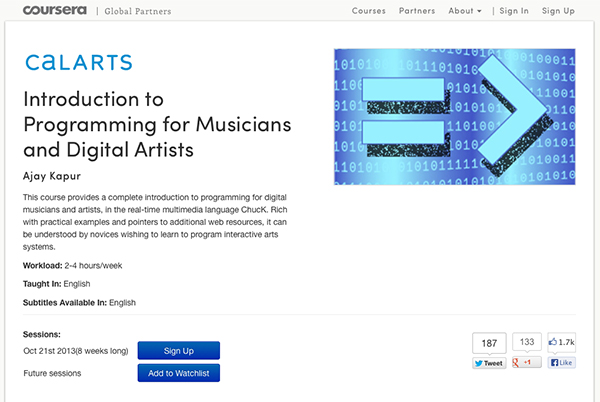 At first glance, the opportunity to take free online courses from some of the country’s most prestigious universities—Coursera partners with schools like Stanford, Princeton, Rice, and Yale—sounds great. My friend Kate represents a relatively noncontroversial MOOC student: an educated adult taking a class in a non-university, not-for-credit setting. She’s what proponents of MOOCs would call a “lifelong learner,” and an ideal beneficiary of free, high-quality online education.
But for some educational stakeholders, organizations like Coursera—which is for-profit, funded by venture capitalists, and doesn’t classify itself as an institution of higher learning—represent a threat to higher education as we currently know it. MOOCs are particularly controversial when they are offered for credit in the setting of a university degree program. Holding up MOOCs as a fast, cheap alternative to a traditional college education—which for most American students comes with a heavy price tag—could result in a two-tiered class system in which rich students get face time and poor students get screen time.

MOOCs also raise concerns about attempting to replace or devalue real, live university professors. California legislators recently rejected a controversial bill which would have outsourced some entry-level state university courses to for-profit companies like Coursera and Udacity. The bill was uniformly opposed by professors in the California State University system.

In light of all this possibility and controversy, I was interested to learn that my alma mater, the Blair School of Music at Vanderbilt University, had become involved with the MOOC wave. I reached out to Cynthia Cyrus, my former dean and musicology professor who is now associate provost for undergraduate education. Cyrus has a career-long passionate interest in scholarship’s presence on the web. When she first arrived in the provost’s office in 2011, hardly anyone was talking about MOOCs, she said. Since then, MOOCs have become the focus of a national education debate, and Cyrus has helped oversee and develop the university’s partnership with Coursera. Cyrus described the work as exhilarating. “It’s not very often,” she noted, “that someone gets to start a whole new division of the university.”

In my conversation with Cyrus, I learned a great deal about the particular copyright challenges that schools of music face when it comes to using recordings and other media in the context of online learning. We also discussed how Vanderbilt is choosing to relate to the complex ethical questions that MOOCs raise, offering a window into the important decisions that higher education institutions across the country are making.

Ellen McSweeney: Vanderbilt initially wanted to have five Coursera offerings—one from each school. Is the Blair School of Music course up and running?

Cynthia Cyrus: One of the Blair School faculty is lined up and ready to teach for Coursera, and that was supposed to be one of our first five offerings. But the copyright questions in music are so much a higher hurdle to cross over that we haven’t actually brought that particular course to fruition.
Some of the other schools teaching for Coursera try to skirt copyright issues by linking to things on YouTube. But Vanderbilt’s policy is that if it’s a violation of copyright in one arena, simply linking to someone else doesn’t get us out of that moral dilemma.

We’re trying to be really mindful about the ways in which musicians are compensated as we move forward in this digital medium.

EM: What would your ideal solution be for the copyright issues that music MOOCs are facing?

CC: The strategy that I’d really like to see come to fruition is for Coursera to do negotiations with one or more of the music aggregators to say, “Wouldn’t it be wonderful if we could get access to the iTunes list, where students could listen for free during the course and then purchase it later if they’d like?” This is similar to what’s been done with textbooks. That’s my ideal, whether it’s iTunes or Naxos or maybe even a BMI or ASCAP relationship. I think it would be best for all concerned if we have a broad musical catalog to draw on for these teaching purposes.

The second model, which will be [Vanderbilt’s] default if we can’t get Option A to work, is to simply negotiate copyright for each and every example that the faculty member wants to use. But that’s a huge amount of money and a large amount of work. Last year, with no staff supporting the Coursera project, that was simply not an option, which is why the Blair course is still on hold.

CC: It’s not just that they’re for profit, but also that they haven’t defined themselves as an institute of higher education. There is no case law to determine whether there is fair use in this area, and nobody wants to be the one to provide the case law! But there’s a real need, not just for Coursera, but many different providers of intellectual knowledge, to be fluent in the idioms of 21st-century culture that aren’t in any of the protected categories under U.S. law. There’s a real absence of legal framework for handling these kinds of issues.

That’s one of the reasons, if you look at the Coursera course list, there’s quite a list of things that can be taught without copyright-protected musical examples. Faculty members must deliberately restrict what materials they use as illustrative examples.
It drives me nuts a little bit. Without structural and legal support, we’ve categorized an entire area of culture as being off limits for MOOCs. And I have issues with that, coming from a school of music. Although it does remind me that there’s a reason that I like to work on [materials created by] dead people! The 15th-century nuns are not going to object to what I’m out there printing.

EM: There are major ethical concerns surrounding MOOCs—about who’s funding them, who’s taking them, and whether they’re trying to replace higher education altogether. Where does Vanderbilt stand on those questions?

CC: Vanderbilt is treating Coursera as outreach, as a means of global penetration, and as a way to reach out to alumni and support continued engagement with the university community. None of our classes are available here for credit, and that’s an important distinction.
The model that the state of California was contemplating is worrisome on a couple of levels. First of all, using one school’s intellectual capital to meet your own institutional agenda is a way of ceding your authority as an institution of higher education. Coming from my faculty background, that makes me uncomfortable. The idea of taking, for example, our one-credit nutrition course out of the Vanderbilt environment and having another institution say, “Boom, you complete that course, you get one credit!” is problematic. That needs to go through a university’s faculty governance. Faculty should always be the ones to determine whether a course is meeting their educational vision. Here at Vanderbilt, we haven’t asked any of our faculty to review the MOOCs in a for-credit environment. That’s not what a Vanderbilt degree is about.

While none of our Coursera offerings are for-credit, faculty can use materials developed for Coursera as part of their face-to-face courses. Faculty have been able to do “flipped” classroom teaching, which means that students do passive learning—like watching lectures—at home. Professors then use class time for group activities and active learning that hasn’t always been possible, given the constraints of the schedule.

We’ve also done quite a bit of experimentation with what we call “wrapping,” in which a Vanderbilt professor can use a MOOC as part of their own course content. Professor Doug Fisher did this with one of [Coursera cofounder] Andrew Ng’s courses. Doug taught a class that was “wrapped” around Ng’s lectures. Doug’s course drew on those as a body of common knowledge and a jumping-off place for the students.

The crux of the issue is that what one does in a college class is more than acquire content. MOOCs are great for the content part, but the community insights, the ability to synthesize material, those higher-order processes happen because you are studying a common area. They are not themselves the common area of study. And the thing we know from longitudinal studies of students is that they don’t remember the content, but they do retain the intuitions that they developed while working through that content. That’s the part that we could lose when schools are relying too heavily on digital media.
EM: What do you see other schools of music doing with their MOOC offerings?
CC: Berklee College of Music has a number of Coursera courses, and they have opted mostly for subject matter that doesn’t require too many copyright-protected musical examples: Jazz Improv, Intro to Music Production, Songwriting, Intro to Guitar. There are a variety of music courses out there, but each one of them has had to invent its own solution to the copyright problem. Schools of music are not yet working cohesively as a team to get these issues worked out.
Curtis has a course live now on Beethoven Piano Sonatas, and another one on Music History through Performance that goes live in October. There, I think, they are probably capitalizing on out-of-copyright works. I don’t know what their solution would be for the 20th or 21st century. With older repertoire, they have to worry about performer permissions, but they don’t have to worry about the permissions of composers.

EM: Right! I’m writing this article for a contemporary music community audience, and realizing that we may have particular barriers to participating in the MOOC wave.

CC: Right. It is entirely possible that when we get into pulling courses together, people will be generous with permissions. However, most of the people we negotiate permissions with are lawyers. It’s not the musicians saying yes, I want to compromise and be part of this social good. We’re dealing with lawyers. To me, lifelong learning audiences need to and want to be engaged with the musical details of the music that they’re choosing to hear live. But it’s awfully hard to get through the hurdles of how to get that up and online without stepping on somebody’s toes.