I spent all of Friday attending the annual meeting of the Music Publishers Association, which is proud to call itself the oldest music trade organization in the United States. It was founded in 1895. This year, the MPA’s long history was much in evidence—even the printed program, as well as all the name tags for the attendees featured an iconic-looking old logo.

History screams from the Music Publishers Association’s logo printed on the program for their 2012 annual meeting.

After the announcement of the MPA’s 2012 Paul Revere Awards, which honor graphic excellence in published music scores, a lifetime achievement award was given to Frank J. Hackinson, who has been in the music publishing business for seven decades. Highlights of Hackinson’s CV include popularizing the mixed song folio (now a standard publication format for pop music), signing the Beatles to their first print music contract in the United States, establishing Columbia Pictures Publications (whose roster included Henry Mancini, Stevie Wonder, Bruce Springsteen, and Whitney Houston) in 1971, and, in 1988, the FJH Music Company which specializes in repertoire for concert band and educational music publications. 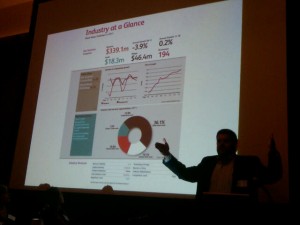 Bryan Bradley shows MPA attendees some facts and figures about the state of music publishing.

What was particularly heartwarming about this gathering was how deeply personal it all was. At one point during the meeting, there was a memorial to MPA members who had died during the past year, including, in most cases, brief archival video footage of conversations with them. Seeing the faces behind the names throughout the day, both of people who are now longer with us as well as those who very much are, helped me to understand how this particular industry—unlike most in our nation—is very much one that has been molded by individuals rather than by large corporations. Bryan Bradley, the chief operations officer of Alfred Music Publishing who moderated a panel in the afternoon, acknowledged that this “industry is very mom and pop.” And many of these individuals have also been and or continue to be composers or active performing musicians in addition to their work on behalf of other composers and interpreters.

Yet in the minds of many people, publishers are monoliths—giant, impenetrable entities that control the copyrights of others and draconically police their usage. And in the era of the internet, many people have taken an alternative view of intellectual property. Some believe that anyone should be able to disseminate any and all information to whomever they want to freely and at any time, and most believe that the duplication of intellectual property is not the moral equivalent of stealing a physical object. But people who create music in particular are, of course, well aware that this form of creation, though it can never be corporealized into a car or a diamond ring, can be far more valuable than either. And if there is no way to protect this kind of non-physical creation, the ability to make a living from creating it, which has always been tenuous at best, becomes even more of a pipe dream. Ironically, of course, many of those same folks who believe that intellectual property does not require financial remuneration spend loads of money on technological equipment, as well as on online connections, which would have considerably less value for them if these pieces of equipment and services did not supply them with that same intellectual property. As a result, companies like Apple, Facebook, and Google (which owns YouTube in addition to controlling how most people surf the web) are now catastrophically huge corporations, far bigger than any publisher. So much for monoliths! 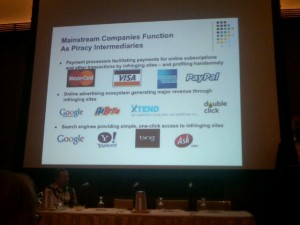 One of the most poignant observations about this phenomenon that I’ve yet heard was a comment made during the MPA meeting by attorney Kenneth B. Anderson. Anderson has recently been retained to serve as legal counsel for a new anti-piracy initiative launched jointly by the MPA and the National Music Publishers Association (NMPA), the other member organization for music publishers based in the United States. (Anderson, whose other clients include the Beastie Boys and the Dixie Chicks, is no stranger to a challenging fight. I imagine that representing the Dixie Chicks during the radio boycott following comments made by members of the band that were critical of then President George W. Bush must have kept him busy.) Anyway, during an updated Piracy Report given by Anderson, he exclaimed, “The concept that the entertainment industry is a Goliath and that the internet industry is a David is a 180 degree reversal of reality.”

Of course, whether or not Anderson can help the MPA and the NMPA change the climate of today’s digital environment remains to be seen. But if these mostly small organizations have anything going for them against giant corporate interests it is ultimately history. The NMPA, though not as old as the MPA, dates back to 1917. Together these organizations have been around for over 200 years and presumably have weathered a great number of challenges before the internet.

Bryan Bradley perhaps had the clearest vision of how the industry needs to move forward: “You need a specific knowledge to use the products we make. We’re not selling iPads that anyone can use. If we’re to survive, we need to create more customers. We’ve got to create more musicians, people who are passionate about music. If we don’t inspire that passion, we’re shooting ourselves in the foot.”