JC Sanford Orchestra: Views From The Inside
(Whirlwind Recordings 4652)

The 15-piece orchestra sports a number of unconventional instrument choices, such as accordion, oboe, and tastefully employed electronics, which result in unusual and highly compelling textures. Sanford is a masterful orchestrator, skillfully weaving together a somewhat disparate selection of instruments into delightfully intriguing forms. Matt Holman’s expansive trumpet solo in An Attempt At Serenity and Jacob Garchick’s spastic accordion ostinatos that open Verrazano Bikeride are just two examples of the range of expression on this album. The compositions are intended to be tributes to various aspects of Sanford’s life in Brooklyn, and indeed it sounds as if he soaked up the sounds of the streets and figured out how to gracefully incorporate them into his music. 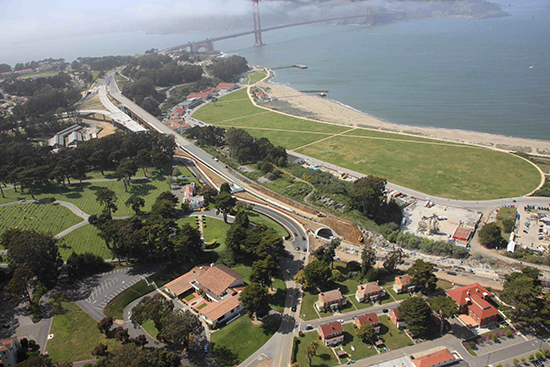 This fall will be an exceptional time for San Francisco Bay Area musicians of all stripes who are interested in making music with a large community of fellow new music lovers. Two massive projects—Lisa Bielawa’s Crissy Broadcast and Rhys Chatham’s A Secret Rose—will be rehearsed and performed in the Bay Area in October and November, respectively, and both are actively asking the local music community to join their ranks as performers. Bielawa is assembling a coalition of 800 musicians to join her on San Francisco’s Crissy Field, and Chatham has put out the call for 100 electric guitarists to fill the Craneway Pavilion in Richmond, on the east side of the San Francisco Bay.


Lisa Bielawa’s project is the second in a now developing series that began this May in Berlin with Tempelhof Broadcast, an outdoor performance on an airfield that had been converted into a park. The 250 musicians who participated in the Tempelhof performance included members of the San Francisco Girls Chorus; though still based in New York, Bielawa is a Bay Area native who was named the artistic director of the Girls Chorus earlier this year. At a recent event preview discussion held at the Center for New Music in San Francisco, Bielawa mentioned that the idea of doing the project in her hometown on Crissy Field, also a park that was once an airfield, hadn’t even occurred to her until she was in San Francisco, working on the music for the Berlin project.

Now part of the Golden Gate National Recreation Area, the beautifully restored Crissy Field is a large park on the Bay with iconic views of the Golden Gate Bridge and Alcatraz, frequently traversed by runners, picnicking families, and tourists on bicycles. On October 26 and 27, these regulars will encounter 800 musicians, drawn from around a dozen ensembles, ranging from volunteer choruses to middle school bands to traditional Chinese instrument orchestras, as well as individual amateur musicians, who, through the course of the work, will expand to fill the park with sound. The musicians will be guided by the San Francisco Contemporary Music Players, who will be acting as the lead professional ensemble for the performance. 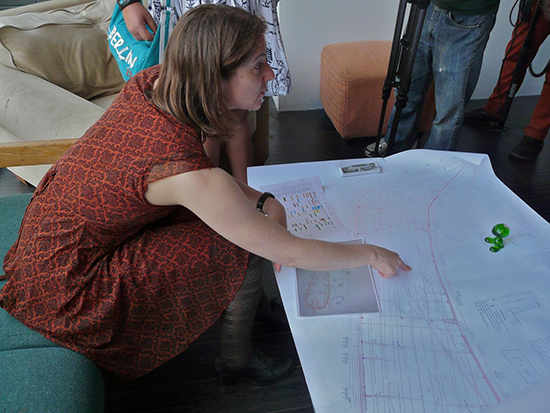 As described at the preview panel, the musical material in Crissy Broadcast is fully composed and notated, with the musicians divided into groups who have specific trajectories and defined musical material to play at specific points. (At the moment SFMOMA, which has just closed for expansion, has an astonishing year-long installation of eight monumental steel sculptures by Mark di Suvero up in Crissy Field which are juxtaposed beautifully with the bridge; these sculptures will be used in defining the movement paths of the musical groups.) Bielawa spoke of wanting to explore in the Broadcast pieces the experience of hearing sound across non-resonant spaces, and how great separation allows for very different musical material to occur simultaneously without clashing as it would even in a large indoor space.

Individual musicians are encouraged to join the project through the San Francisco Symphony’s Community of Music Makers program. There is no cost to apply, and the rehearsal and performance commitments are detailed on the project’s website. 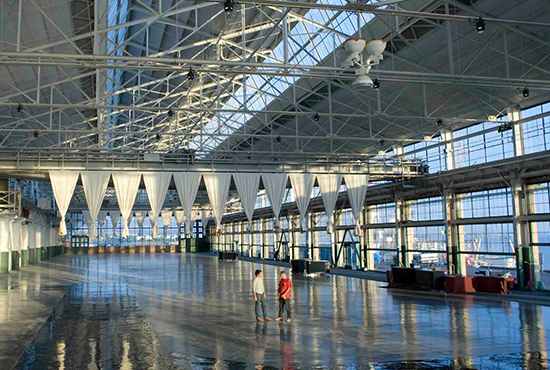 On the other side of the bay is the Craneway Pavilion, another historical waterfront location, where Other Minds’ presentation of A Secret Rose for 100 electric guitars by Rhys Chatham will take place on November 17. Located in the city of Richmond, in the East Bay north of Berkeley, the Craneway Pavilion sits on the site of a former Ford assembly plant from the 1930s that was reconfigured to build tanks and jeeps during the Second World War. After sustaining damage in the 1989 earthquake, Craneway reopened more than a decade later as an event space, with broad views out over the bay and adjacent to the Rosie the Riveter/World War II Home Front National Historical Park, a nod to its former function. 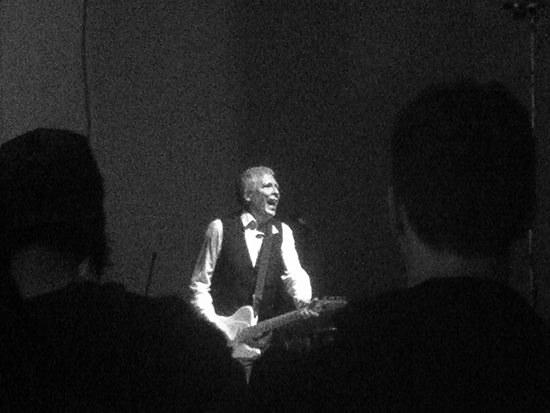 Other Minds brought Paris-based Rhys Chatham to San Francisco in June for some preview events to put out the call for volunteer guitarists to join Chatham’s orchestra. New music enthusiasts and Chatham devotees packed The Lab, a small art space in the Mission, for enthusiastic performances of an excerpt from his legendary Guitar Trio (G3) and The Out of Tune Guitar no. 3, with Bay Area guitarists George Chen, John Krausbauer, Ava Mendoza, Bill Orcutt, and John Schott joining Chatham, along with bassist Lisa Mezzacappa and Jordan Glenn on drums. Earplugs were available on the way in but they tended to dampen the beautiful overtone series that sang out above the massed guitar sound. Other Minds has made the full recording of the preview event, including the discussion with Chatham, available on RadiOM.


Structured in five movements, A Secret Rose will have three sections of guitarists with leaders, plus a bass player and a drummer. Though certain parts of the piece are sure to be “thunderous and rousing,” Chatham assured that “the purpose of the music is not to assault people… There’s nothing like the sound of 100 electric guitars playing quietly.”

All guitarists with a rudimentary ability to read notation are welcome to apply. The deadline is August 15; the rehearsal and equipment requirements can be found on the application page.