New Music USA has submitted six works for consideration in the call for scores for the 2021 International Society for Contemporary Music (ISCM) World New Music Days which, pandemic willing, is scheduled to take place in Shanghai and Nanning from September 17-25, 2021. Each of these six works is by a composer who was chosen to participate in New Music USA’s Amplifying Voices program, which was launched in January 2020 to promote marginalized voices in orchestral music and now involves a consortium of 35 American orchestras. Since orchestral music is only one of 12 categories in this year’s call for scores, and each of these composers has created vital work in a wide range of instrumentations, New Music USA has submitted three orchestral scores and three works scored for other combinations. The six composers are Valerie Coleman, Tania León, Jessie Montgomery, Brian Raphael Nabors, Nina Shekhar, and Shelley Washington.

Every year since 1923, with the exception of hiatuses during World War II (1943-45) and the global COVID-19 pandemic (2020), there has been a festival of new music presented somewhere in the world under the aegis of the ISCM, which is a global network of organizations devoted to the promotion and presentation of the music of our time. Some now canonical contemporary music compositions which have received their world premiere performances during these annual ISCM festivals include Alban Berg’s Violin Concerto (posthumously), Pierre Boulez’s Le marteau sans maître, Hindemith’s Clarinet Quintet, György Ligeti’s Apparitions, George Perle’s Six Etudes for solo piano, Stockhausen’s Kontakte, Isang Yun’s Third String Quartet, and one sixth of Anton Webern’s published output. These festivals have also had a laudable track record in embracing a wide diversity of new music aesthetics and have been historically way ahead of the curve in showcasing tons of emerging composers, in particular, some significant female composers relatively early in their artistic trajectories: Joan La Barbara, Ellen Taaffe Zwilich, Ruth Crawford-Seeger, Peggy Glanville-Hicks, Canada’s Barbara Pentland, Chile’s Leni Alexander, Serbia’s Ljubica Marić, Korea’s Unsuk Chin, etc. Zwilich and Chin have both credited the ISCM for helping to launch their compositional careers.

For each year’s festival, member organizations submit six pieces of music for consideration in a call for scores. If the member’s submissions follow the ISCM guidelines (the six works must be in at least four different categories of instrumentation, which varies each year), then at least one work must be selected for performance in the festival to ensure that new music from all over the world is presented each year. Many member organizations hold specific competitions to select their six submitted works. Each year New Music USA, which has been a member of the ISCM since 2014, submits six works which have been previously vetted through our various grant programs or through various initiatives for which New Music USA has served as a partner (e.g. EarShot, the Minnesota Orchestra’s Composer Institute, New Jersey Symphony Orchestra’s Edward T. Cone Composition Institute). Composers whose New Music USA submitted works were previously performed during the ISCM World New Music Days include Katherine Bergman, Chen Yao, Saad Haddad, Geoffrey Hudson, and Missy Mazzoli. 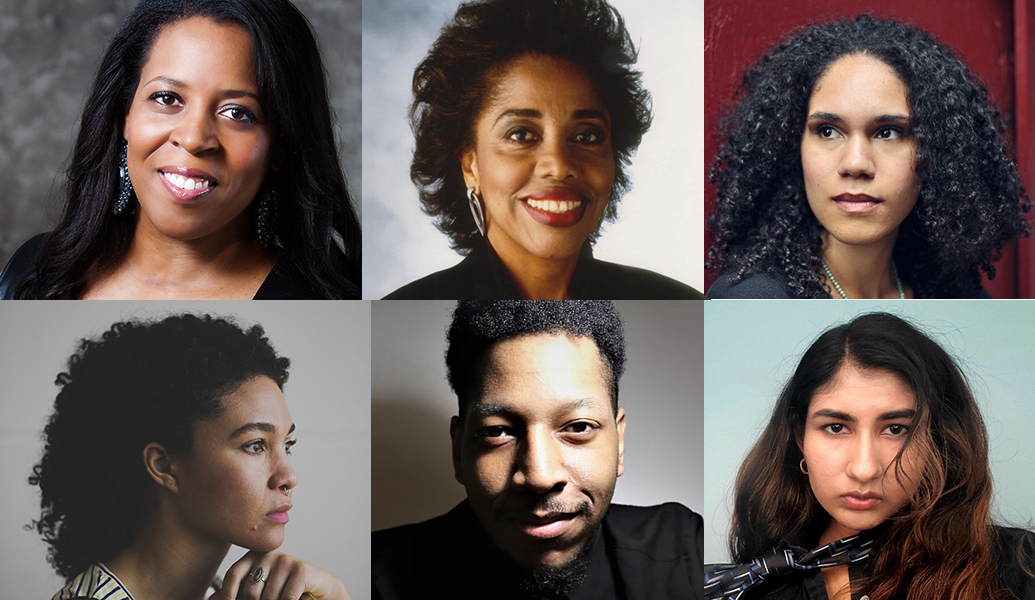 Valerie Coleman (b. 1970): Seven O’Clock Shout for orchestra (2020)
“Seven O’Clock Shout is a declaration of our survival,” says composer Valerie Coleman. “It is something that allows us our agency to take back the kindness that is in our hearts and the emotions that cause us such turmoil. … We cheer on the essential workers with a primal and fierce urgency to let them know that we stand with them and each other.” Seven O’Clock Shout was commissioned by The Philadelphia Orchestra which is the consortium lead for a future commission by Valerie Coleman as part of the Amplifying Voices program. Seven O’Clock Shout, which received its world premiere in a physically-distanced performance by The Philadelphia Orchestra conducted by music director Yannick Nézet-Séguin during the League of American Orchestras’ Virtual Conference in 2020, has become the orchestra’s anthem in response to COVID-19. In addition to honoring frontline workers, this special commission celebrates the strength of human connection even during times of isolation. (Read and/or listen to a conversation with Valerie Coleman.)

Tania León (b. 1943): Stride for orchestra (2019)
Stride is a single-movement orchestral composition which was commissioned by the New York Philharmonic and the Oregon Symphony as part of the New York Philharmonic’s “Project 19,” an initiative commissioning new works by 19 female composers in honor of the centennial of the ratification of the Nineteenth Amendment to the United States Constitution which extended voting rights to women. It was first performed by the New York Philharmonic under the direction of Jaap van Zweden in David Geffen Hall at New York City’s Lincoln Center on February 13, 2020. The piece is dedicated “In honor of Susan B. Anthony and to the visionaries Deborah Borda and Jaap van Zweden.” Composer Tania León, who will create a new work for the Arkansas Symphony as the lead commissioner in the Amplifying Voices consortium, has acknowledged that Stride was also inspired by her progressive grandmother. The work’s title refers to the action of moving forward. (Tania León was the very first individual composer interviewed for NewMusicBox back in 1999; you can read a complete transcript of that interview here.)

Nina Shekhar (b. 1995): Lumina for orchestra (2020)
According to composer Nina Shekhar, who was recently selected by the Youth Orchestra Los Angeles (YOLA) to compose a new orchestra work for which they will serve as the lead commissioner in the Amplifying Voices program, her work Lumina “explores the spectrum of light and dark and the murkiness in between. Using swift contrasts between bright, sharp timbres and cloudy textures and dense harmonies, the piece captures sudden bursts of radiance amongst the eeriness of shadows.” The work, which was written for the USC Thornton Symphony and premiered by that orchestra under the direction of Donald Crockett at USC Thornton’s Bovard Auditorium in Los Angeles, California on February 28, 2020, was awarded the 2021 ASCAP Foundation Rudolf Nissim Prize.

Shelley Washington (b. 1991): Middleground for string quartet (2016)
About her string quartet Middleground, Shelley Washington writes: “MIDDLEGROUND: the space grounded, the between, the center. The Heartland. The prairie, the grasslands, Konza, Flint Hills, Manhattan, Emporia, Salina. Where we gathered. Home of the heart, heart of the home. The years spent in cars, daydreaming, scooping handfuls of wheat, racing out into amber fields, cycling together, water wheel ice cream, fireworks and apples. The stories shared, books read sprawled in the yard, family prayers over anything, late evening walks, quiet nights. Open arms, open hearts, humble and extraordinary. Together, with our wonder, our joy, we created an incredible painting with abounding colors. The kinds of colors that linger in the mind’s eye long after they are out of sight and cradle you long after goodbyes are spoken and car doors closed. The kinds that find you counting the days until the next birthday, the next holiday, the next bike ride, the next Camp, the next anything just so you can see them again. When you close your eyes you feel their warmth. They stay. The middle ground: my refuge born from the land living in my heart. Where my home is, living and breathing outside of my body, thousands of miles apart. This hallowed ground. For my family.” Middleground was first performed by the JACK Quartet in New York City in 2016 and has subsequently been performed by the Jasper String Quartet as well.

Brian Raphael Nabors (b. 1991): Énergie for flute and electronics (2015)
According to composer Brian Raphael Nabors, whose Amplifying Voices commissioned orchestral work will be premiered by its lead commissioner, the Berkeley Symphony, his 2015 work Énergie for flute and fixed-format electronics, “encompasses the very nature of energy and its purpose throughout the universe. It also uses its musical material to depict life’s everyday movements, as well as forces of nature such as wind and gravity. The flute is written in a way that captures a very expressive range of tone and timbre throughout the piece; to enhance the expressive nature of the electronics.” The electronics were created from synths using various effects such as phasing, reverb, granulation, and more. Processed vocals, educational material on the subject of energy, as well as recordings of President Barack Obama’s comments on green energy were also utilized. The work was first performed by Brittany Trotter on the Fresh Perspectives new music series launch concert at Lab Studios by Glo in Cleveland, OH in 2018.

New Music USA’s Amplifying Voices program was kick-started with a generous contribution from The Sphinx Organization which selected this initiative to shift the canon for future generations as a Sphinx Venture Fund (SVF) recipient for 2020. Additional funding from the Sorel Organization and industry partners ASCAP and Wise Music Trust has enabled the program to further expand. Through a national call, New Music USA asked orchestras to come forward with proposals for co-commissions and a commitment to promote existing repertoire that deserves further performances. There are now a total of eight orchestras serving as consortium leads in the program. The other two composers involved are Tyshawn Sorey and Juan Pablo Contreras who will work with the Atlanta Symphony Orchestra and the Las Vegas Philharmonic respectively. Other partner orchestras involved in the program include the Aspen Music Festival and School, Auburn Symphony, Baltimore Symphony, Boston Landmarks Orchestra, Boston Modern Orchestra Project, Buffalo Philharmonic Orchestra, California Symphony, Detroit Symphony Orchestra, Kansas City Symphony, Louisiana Philharmonic, New Jersey Symphony, New World Symphony, Richmond Symphony, ROCO, and Seattle Symphony.