Since its founding in 1991, vocal ensemble Conspirare has become not only part of the firmament of the Austin music landscape but also part of the national and international scene. Led by founder Craig Hella Johnson, Conspirare has recorded a number of CDs and DVDs on the Harmonia Mundi label and has received awards and media recognition, including the PBS television special “A Company of Voices: Conspirare in Concert,” an Edison award (Dutch Grammys), and five Grammy nominations. Among the highlights of last season were “Renaissance & Response: Polyphony Then and Now,” a weekend-long festival featuring works by Josquin Des Prez, Orlandus Lassus, Tomás Luis de Victoria, and J.S. Bach in four distinct programs, each featuring a world premiere by series composer-in-residence Robert Kyr. The ensemble’s out-of-town engagements included three performances in New York under the auspices of the Weill Music Institute of Carnegie Hall. This year is shaping up to be similarly busy, and Conspirare has wasted no time in presenting two concerts of new music multiple times over the past few days. 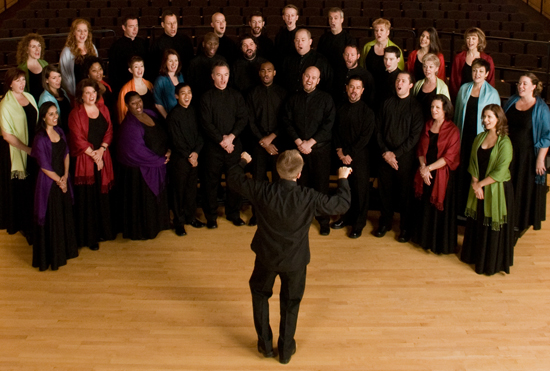 The first concert featured the world premier of Peter Scott Lewis’s The Changing Light, a co-commission between Conspirare and the Sanford Dole Ensemble. On either side of the Lewis were a number of pieces by Eric Whitacre, including Five Hebrew Love Songs and the U.S. premiers of Whitacre’s Oculi Omnium and Alleluia. Conspirare opened the afternoon concert with Whitacre’s With a Lily in Your Hand, a light but driving movement in 7/8 in which faster figures were contrasted with longer, less rhythmic segments. Right off the bat, it became clear that this was a seasoned group of musicians performing at an extremely high level; singers who could probably sing the phone book and sound fantastic. Part of me noticed the nuts and bolts elements, such as communication among the members and the strong direction of Johnson, but another part of me was just floored by the sound both in terms of quality and quantity. The twenty-four singers produced truly impressive volume at one moment, and were able to draw in the audience with the lightest pianissimo the next.

Five Hebrew Love Songs on poems of Hila Plitman was distinctly different from the other Whitacre offerings, partly because of the addition of string quartet and partly because of the structural elements both within each movement as well as in the larger form outlined by the five movements. The second and fourth movements, “Kala kalla (Light Bride)” and “Eyze Sheleg! (What snow!)” were haiku-like in their length and syllabic structure. “Kala kalla,” with its tambourine and 3-3-2-2 contrasting sections had a compelling forward movement throughout before coming to something of an unresolved cadence. The final movement, “Rakut” (Tenderness), began with a “bum-bum-bum” vocalization which changed to what was virtually a speaking part complimented by string harmonics. The effect was a captured texture (I hesitate to say “frozen” here as the immobility was not cold, but static string harmonics can certainly have that effect) which began to move forward via rising tenor lines, their pitches circled by the strings. Alleluia was presented as a tribute to UT Professor of Organ Gerre Hancock, who had passed away earlier in the day. An arrangement of an earlier work for band, “alleluia” was the primary text of the piece, driving the sopranos higher and higher until an “amen” ending closed the work.

The Changing Light by Peter Scott Lewis on text by Lawrence Ferlinghetti and scored for string quartet, vibes, marimba, and choir in four movements was the centerpiece of the concert. The three poems (the second, “Big Sur Light,” was divided into two parts to create the middle movements) describe the light of the sun in various locales and times in California. In “Big Sur Night,” a steady opening pulse gave way to more animated movement, as soprano and tenor wound their way through the text. Throughout, the string quartet mostly followed and supported the choir until the instrumental and vocal roles came together when the pulse returned at the end. “The Moon Stayed Full Last Night” began with an instrumental introduction followed by a warm, lyrical accompaniment. An interlude into which the pulse seemed to disappear was followed by a gentle ending, hints of pulse returning as the final notes echoed through the space. 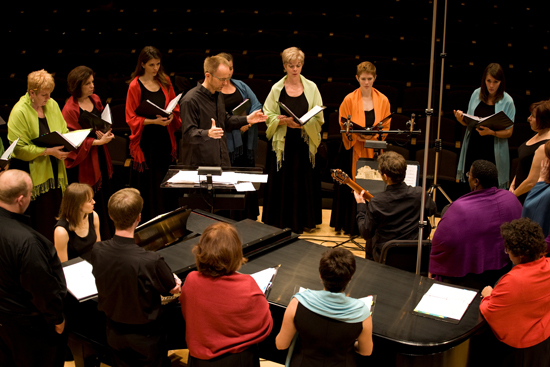 The second concert featured Joby Talbot’s Path of Miracles. On text by Robert Dickinson, Path of Miracles is an a capella oratorio of sorts which describes four of the main stops along the route from France to the cathedral shrine of Santiago de Compostela. Commissioned in 2005 by Nigel Short’s Tennebrae ensemble, the piece features 17 separate vocal parts as well as a crotale here and there. The first movement, “Roncesvalles,” began with a bit of theatricality. An altar lit with red light remained empty for several minutes, allowing the audience to settle into the space in what felt like a brief meditative state. If that seems like a short amount of time to meditate, try to sit quietly for two minutes while bathed in red light.

Slowly and deliberately mimicking stylized pilgrims, the basses and tenors entered from the back of the church, and when they had made their way to the front they continued pacing in a circle for a short period. Eventually they turned to face the audience, the basses singing quite low in their range and developing a slowly rising glissando that culminated in a tremendous climax. They were joined in this climax by the female voices hidden in the choir loft above us. A decrescendo followed as the sopranos and altos came down and took up antiphonal positions along the length of the church. Long, vaguely Arabic motives were traded back and forth for a time as the women transitioned from the sides of the church to their places on stage. A fugal section gave way to declamatory phrases as the basses took the melody from the sopranos. A largely 6/8 section peppered by hemiola provided tension as piercing crotales cut through the texture. All this built to a climax which quickly dwindled to a solo bass ending the movement.

The second movement illustrated the drudgery of pilgrimage through a reflective, slow ostinato topped by various individual lines rising mirage-like over the top. A fever dream staccato tutti emerged from this texture and lead ultimately to a quieter, unsettled harmony, overtones pulsing against one another. Slowly and in turn, the vocal parts dwindled, leaving the basses alone at the end.

The third movement saw previous motives return in ostinato patterns sung by the tenors and basses. In a return to the antiphony of the first movement, the chorus took up a flanking position while the basses spread through the center aisle. Johnson turned to face the audience (and conduct his group) and during these moments it was difficult not to see the music on his face as clearly as you could hear it in the room. Conductors need no excuse to be emotional and effusive, but it seemed less like Johnson was conducting the music and more like the music was passing through him. It was something I’ve witnessed in a handful of experiences with performers, but very rarely with a conductor and it was, quite frankly, a powerful thing to see. The tumultuous motion of the piece culminated in a truly gorgeous arrival, moved briefly to the minor mode, and ended in a preparation for the final movement.

The final movement depicts the arrival at Santiago and starts with the initial motif of the piece. Overlapping entries played like stretti writ large, each voice gently entering in what seemed like an isorythmic treatment of the material. This gentle music moved to a declamatory tutti section, the men joined by the women as staccato major mode 5/4 figures transformed to 6/4. The piece ended reflectively with the members of the choir moving, one by one, out of the room in a reversal of the initial entrances. The wonderful difference was that instead of leaving the audience alone in silence, the singers continued to sing as they walked further and further from the space, which sounded (to listeners of a certain vintage) not unlike the fade-out on any number of albums, though one that lasted several minutes. The effect was tremendous and the audience responded strongly, applauding for some time after the piece ended.

Vocal music has the advantage of text to connect to the listener, but I’m not sure that it’s simply the narrative that keeps an audience connected to a piece like Path of Miracles. The power of the human voice directed and shaped by a significant musical mind like Johnson’s has the power to do nearly anything, including connecting with incredibly diverse audiences like the one at St. Martin’s church in Austin this past Saturday.