The American music community has lost several significant figures over the last two weeks. Three of its most influential luminaries passed in the first three days of this week, and they should be acknowledged.

The most familiar name among the three probably belongs to pianist Marian McPartland, who passed away on Tuesday, August 20, at the age of 95. Born Margaret Marian Turner in Windsor, England, she displayed a prodigious aptitude for music and studied at the Guildhall School of Music and Drama in London. But she found herself drawn to jazz and in 1938 went on the road as Marion Page with a vaudeville group, Billy Mayerl’s Claviers. (Mayerl was an early proponent of jazz in England who performed as the soloist in the 1925 London premiere of Rhapsody in Blue and later opened the School of Syncopation, where ragtime and stride piano were part of the curriculum.) Part of the Claviers’ itinerary included entertaining American troops during World War II, and it was while performing in USO shows in Belgium in 1944 that she met and began performing with her future husband, Jimmy McPartland. He was a Chicago-born cornetist who in 1924 was the 17-year-old replacement for Bix Beiderbecke in the Wolverine Orchestra when Beiderbecke left to join Jean Goldkette’s Victor Recording Orchestra, a precursor of the Paul Whiteman Orchestra. (In fact, many of Goldkette’s best players, including Beiderbecke, were enticed to join Whiteman for better pay.) In 1949, Jimmy and Marian moved to New York City and she began fronting a trio that featured drummer Joe Morello and bassists Vinnie Burke and Bill Crow, firmly establishing her in the Big Apple’s jazz community. She can be seen standing between bassist Oscar Pettiford and pianist-arranger Mary Lou Williams in Art Kane’s famous photograph. 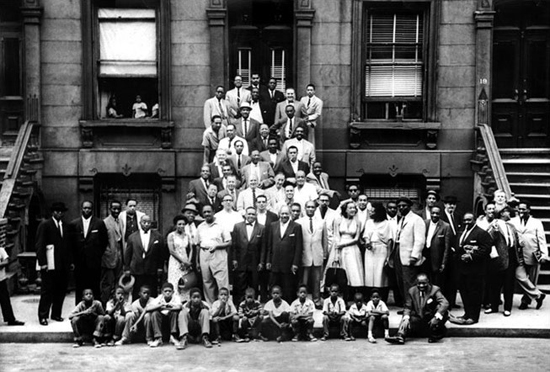 They performed at the Hickory House in New York from 1952 until 1961. She recorded for Savoy and later Capitol Records and even recorded duo sessions with pianist Bud Powell, as well as a live session from the 1958 Newport Festival with baritone saxophonist Gerry Mulligan. She began a career as a radio personality on WBAI in 1964, where she was billed as her husband’s “better half,” and in 1969 formed the independent label, Halcyon, in an attempt to break through the “glass ceiling” that many women jazz musicians found themselves pressed against. Her erudite rhetoric, delivered in a measured and highbrow English accent, coupled with an encyclopedic knowledge of jazz standards made her a natural for radio. She was a regular at the Carlyle Hotel during the 1970s and 1980s, but she is best known as the creator and on-air-host of National Public Radio’s Piano Jazz, a weekly show that mostly featured McPartland talking shop with prominent or up-and-coming jazz pianists. (The show also featured non-pianists, but not very often.)

During the first season of Piano Jazz in 1979, McPartland interviewed Dallas-born Cedar Walton, a pianist who died on Monday, August 19. Walton moved to New York in the 1950s and began working with many of the so-called “hard bop” players there (saxophonist Lou Donaldson, trombonist J. J. Johnson, drummer Max Roach, saxophonist Stanley Turrentine, and trumpeter Art Farmer). In 1961 he replaced Bobby Timmons in the ground-breaking Jazz Messenger groups led by drummer Art Blakey, that also featured bassist Jymie Merritt, trombonist Curtis Fuller, trumpeter Freddie Hubbard, and saxophonist Wayne Shorter. During his tenure in the Messengers, Walton also composed and arranged music for the group. Some of the pieces he penned during this time have become standards of the jazz canon (“Ugetsu,” “Mosaic,” “Bolivia”). After his three-year stint with Blakey, Walton worked for a year with vocalist Abbey Lincoln and then joined a group led by another Blakey alumnus, trumpet legend Lee Morgan. Walton began recording his own groups in 1966 and became a house pianist for the Prestige record label. Although he recorded at least 70 albums as a leader (and hundreds as a sideman or co-leader), he preferred to lead groups that featured horn players. His rhythm section mates were all top flight—usually bassist Sam Jones or David Williams and drummer Billy Higgins—but he recorded relatively few trio records. However, those that he did record show an eclectic and rhythmically complex approach that is rooted in gospel and bebop. His improvisations are deceivingly dense and the listener can be fooled into thinking that Walton is barreling through, when he is in fact a highly interactive and sensitive performer. In 2010, Walton returned to Piano Jazz, although McPartland had retired. His interview was conducted by piano virtuoso Bill Charlap.

I first met Cedar Walton in 1976 in Milan. I was touring with saxophonist Joe Henderson and we had played at a jazz festival there the night before. The next morning Joe’s group (with guitarist Steve Erquiaga and drummer Mike Hyman) met in the breakfast room of our hotel to eat before we caught a train to the next town on our tour. The only other people in the room were musicians from the bands who also played on the bill. That included drummer Eddie Moore (who was playing with saxophonist Dewey Redman and bassist Cameron Brown) and the rhythm section of the Cedar Walton Quartet (Walton, Jones, Higgins). Joe and Cedar guardedly talked about old times (Joe’s group was comprised of kids who were very new to touring and might not understand what the elder statesmen were talking about). While Walton was reserved in his demeanor, I could tell that there was a playful person just underneath the surface. Years later I had the humbling opportunity to play with him in his funk-based group in Boston with saxophonist Bob Berg and drummer Akira Tana. After the gig, we stayed in the large suite that the club supplied for out of town acts. Walton and Berg were listening to tapes of rough mixes of an album they had just recorded and I was impressed at how animated and passionate Walton (whose stage persona was somewhat stoic) was when listening to music in private.

I relived these and other experiences of meeting Cedar Walton while listening to the WKCR tribute to him on Tuesday. (The station has a policy of pre-empting its programming for a day when a jazz dignitary dies.) While doing research for this post I also ran across a listing for a duo concert featuring Walton and pianist Barry Harris that was to be a tribute to the late Mulgrew Miller. Miller, who left us on May 29, would have been 58 last week, and Harris will be 85 in November. The transposition of numbers in their ages is reflected by Cedar Walton, who was 79 when he died, and the third figure in the trio being discussed, author Albert Murray, who passed away at the age of 97 on Sunday, August 18. While Murray wasn’t a musician, his influence on music today—for better or for worse—is huge. He is the person largely responsible for the establishment of Jazz at Lincoln Center. It is a fact that JALC is often referred to as “the house that Wynton [Marsalis] built,” but it is also a fact that it was the intellectual and spiritual inspiration of Albert Murray that guided its foundation.

Of course, location is everything (when it comes to erecting an edifice) and Murray (whom Duke Ellington referred to as “the unsquarest man I know”) considered the “the traffic circle which commemorates Christopher Columbus who once set out for destinations east on compass bearings west” as the nexus point for the subway lines that traverse the great grid of north-western Manhattan and transport the inhabitants of the neighborhood known as Harlem (South to a Very Old Place, New York: McGraw-Hill, 1971). He saw what was considered African American art, especially African American music, as an indispensible element of American culture. While this seems overly simplistic, it goes a long way towards explaining the American experience, and the idea has served well as a jumping off point for discussions of greater import than whether or not jazz is “America’s classical music.” His arguments pushed open the door of racial integration set ajar during the traditional jazz, swing, and bebop eras. And along with his friend and colleague Ralph Ellison, Murray established a tone for our current jazz-studies intelligentsia (e.g. Stanley Crouch and George Lewis). It’s a double-edged sword that injects a codified version of Signifyin(g) (a term introduced in Henry Louis Gates, Jr.’s The Signifying Monkey) into American highbrow culture but marginalizes the avant-garde—a status that the artists of these eras were all, including Murray, a part of. (Illustrating Amiri Baraka’s concept of “the changing same?”) It has even been argued that the process that led to JALC included a concerted effort to redefine jazz vis-à-vis historical revisionism that rewrites many important jazz figures out of the canon. But Murray famously described “blues-idiom music” as at the root of African American culture (Stompin’ the Blues, “The Musician’s Heroic Craft,” New York: McGraw-Hill, 1976)—an idea that isn’t news to jazz musicians. He removes the emperor’s clothes, so to speak, by revealing the blues as a form of literature and oratory that is mastered through a highly improvised and interactive performance practice; it’s less about emotional expression than about allegoric social criticism. It’s an exciting idea, especially when the counter argument of blues being a Native American form is raised. The end result might be a “chicken-before-the-egg” dialog that could rewrite European musicology. But the work of Jimi Hendrix, possibly the most innovative blues guitarist of all time, appears to have gotten lost in the shuffle. I don’t know if that means whether or not we’ll ever hear the Jazz at Lincoln Center Orchestra take on the task of playing the charts that Gil Evans wrote for Hendrix; but at least, for the time being, jazz “not so much begins and ends as continues.” Thanks to Albert Murray.

Another thing that I discovered during my researching while listening to WKCR’s Cedar Walton tribute is that Walton has yet to be included in the Jazz Discography Project, an oversight that will, hopefully, be rectified. While there is a rather comprehensive listing at Tom Lord’s online discography, it cannot be linked to because Lord’s is a subscription service for academics. (There is a selected discography that is free to view after signing up, but it’s far from complete and not very informative.) I also learned that the memorial concert for pianist-producer-composer-singer George Duke, who passed on August 5, was streamed last Monday (8-19). Duke was one of the most influential musicians of the last 40 years. He was as comfortable playing jazz as he was playing fusion, funk, or the music of Frank Zappa. (Duke was a long-time member of The Mothers of Invention and Zappa played on Duke’s album, George Duke and Feel under the pseudonym Obdewl’l X.) He played a duo engagement last year with bassist Stanley Clarke at Birdland in New York that I couldn’t attend. I’ve heard that they both played well, which makes me sorry I missed it. I’ve only heard Duke on recordings and videos, but never live. But being a professional musician means that one usually works during the hours that other concerts are going on. All of us, even our brightest stars, create our work out of the passage of time, and it is a fact that the passage of time will turn out the stars.