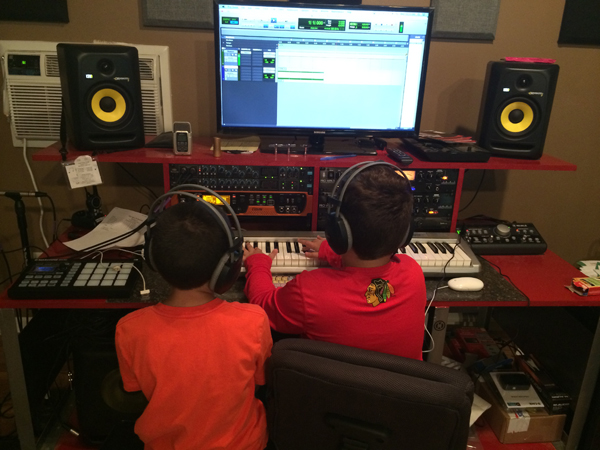 Twin Woods Records, the recording studio at Lake of the Woods and Greenwoods Family of Summer Camps, is a busy place with campers of all ages and abilities passing through to take instrument lessons, write songs, produce beats, and make music.

This morning I produced a parody of “Ridin’ Dirty” (“you won’t catch our cabin dirty”), worked with a camper who wants to write a music theater song, and produced three students who had never recorded themselves singing before. In the past week, the staff musicians and I have produced a children’s folk song, sung Taylor Swift’s “Shake It Off” twice, and jammed out to Nirvana’s “Smells Like Teen Spirit” (which is strangely popular with preteens this year). I’ve worked with a camper on her phrasing in Beethoven’s “Für Elise,” discussing the basics of music theory and challenging her to notate her first melody. At the same time, I’ve been working on a new chamber work for the group Wild Rumpus and have begun to record an album of original singer/songwriter material. This is only the second week of camp.

Working as a teaching artist has resulted in me drawing unexpected connections between disparate artists as I try to engage with students who come from a wide variety of musical backgrounds—some having no musical experience at all.

The campers at Twin Woods work on both group and individual projects, exploring their own lyrical and musical interests. Among the many projects currently being worked on is a solo hip-hop track. The camper writing the song is incorporating samples from pop songs to create his beats. I’ve worked closely with this camper to further his understanding of sampling, in hip-hop and beyond. This resulted in a discussion about the history of sampling and its use in hip-hop, pop, classical, and folk. Over the course of the class, we spoke about De La Soul’s 3 Feet High and Rising, John Oswald’s Plunderphonics, and Girl Talk’s All Day. As the conversation continued, I presented my own sample-based work, On the Verge, and began to talk about how modern-day sampling shares its history with the oral tradition of folk artists such as Woody Guthrie and Pete Seeger, as well as with work like Stravinsky’s Rite of Spring and Aaron Copland’s Appalachian Spring. These lessons rooted the camper’s sampling choices in a deeper musical context. Looking to enrich his lyrical content, I issued the challenge to incorporate a sample or samples that had a unifying theme that could be tied into the lyrics. It was a challenge the student was eager to take on.

Last year, I was working with a camper who was feeling run down from having been at camp for six weeks. He was initially disengaged from the creative process, not wanting to work on anything that day. Rather than accepting this, I began to talk to the camper about Brian Eno’s ambient work, which he had never heard before. He became really excited about the prospect of making his own ambient work and ended up creating a great track.

Prior to my work at summer camp, I spent a day at the Chancellor Academy in Pompton Plains, New Jersey. This school featured a classroom that had been transformed into a fully functioning recording studio featuring ProTools and Reason. I arrived for the class with the sketches and final score of my work Nocturne No. 1 for wind ensemble. Most of the students had never heard a wind ensemble before and their only frames of reference for classical music, if any, were Mozart and Beethoven. I talked about my work, how I’d come to write it, the process of going from a solo piano work to sketches to a score in Finale to a rehearsal and performance. We discussed my harmonic influences, how I hid a favorite pop song inside the work, (again, relating my music to sampling in hip-hop) and the meaning behind my musical gestures. 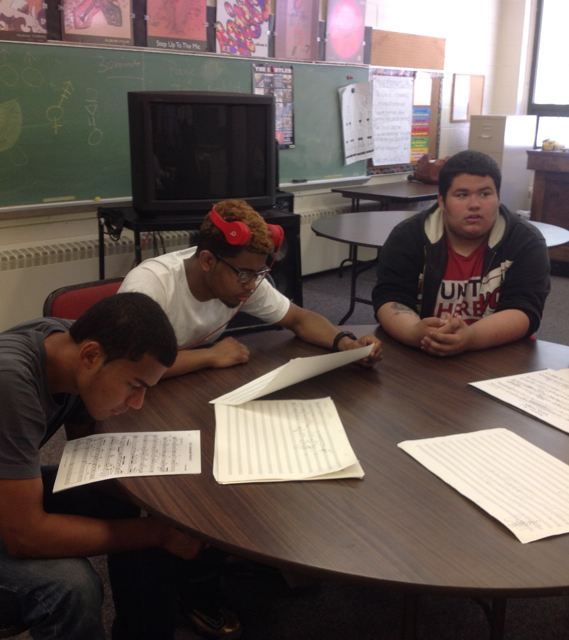 Students at the Chancellor Academy looking over sketches of my Nocturne No. 1 for wind ensemble

Over the course of the hour, we made a series of unexpected connections. One of the students commented that a section of the work sounded like I’d “dropped the bass,” a key moment in hip-hop and electronica. I drew parallels between the staves in my score and the tracks in a ProTools session. After presenting my work, the students shared with me the song they had created together; it proved to be a tremendously moving experience. They had spent the school year putting together tracks in the studio, writing and recording their own beats, synthesizers, and lyrics. The students took immense pride in their work, and deservedly so. I offered critiques of their lyrics and music while also celebrating their accomplishments. By looking past our preconceived notions of musical genres, we were able to find the interconnectivity inherent in all musical expression.

One of the students made an offhanded comment that has stuck with me: “When I started in this program I was writing about guns and drugs. I’ve moved away from that.” He had just finished playing me a track about one love, and working hard to better himself, his family, and his community. This remains my inspirational call to arms: evidence of how music and the creative process can have a tremendous impact on an individual, and how this impact ripples outward beyond the educational setting. In crossing the musical topography and uniting seemingly disparate worlds, teaching artists have the power to remove preconceptions about musical identity as well as labels that students might have internalized about themselves personally, transforming both the individual and their art.
NewMusicBox
Written By