Reflections of the future as digs to uncover what the present holds, maybe as possibility, maybe as impossibility, but surely a practice that sounds an open totality, that is to say improvisation as togetherness, or maybe, consent not to be a single being.[1] Rather than communing in formations, out of and with information as data, or bodies, or domains—sovereign authorities in general—this writing is an attempt to think through the prompt: “…our community ponder aspects of what music will be like ten years into the future,”[2] not only towards a future, but from a future, one I can hear, but also one I might already live in, that radically shifts notions of community, time, and space, under the heading of, and through music, as thought refigured. In listening to the present as an archeological dig,[3] as a site incomplete and still improvising itself out and in, like writing and reading onto and out-from this page, musical thinking can allow a shift in relation. When relation, to time, space, and others, becomes poetic, that is opaque and at the same time fully inseparable, then thinking with the future becomes a reflection of a future: like stars that shine from a past long gone, and mirror us into positions of futurity. It is through music that in this elaboration time is reflected, redirected, so as to allow for another kind of direction, another point of attraction, and maybe we can do away with the point as limit, and point becomes hieroglyphics of sound in motion/relation.

All of this is to say that in this essay I engage the future not as something that comes later on, that replaces a complete and whole present, but rather that the future is a method of thinking that shows something that is already here. In other words, I see the task of such a practice as the task of practicing, of playing, in the present, or maybe in front of an audience, that which I want to matter. As Marshall Allen poignantly said, “You want a better world. You create a better world.”[4] It is thus not so much a thinking through of time but rather a thinking through of music as world-building, as space-time creation: music as a tool to be together (with oneself and with others at the same time, that is also where this distinction as contradistinction becomes irrelevant) in space-time, which is itself that music as poetics of relation. What follows is simply the elaboration of what this means because it requires, on the one hand, a radical shift, and on the other, simply a remembering. Ultimately, this writing is something like a devotional practice,[5] maybe we can call it a meditation, or a recitation of those sincerities of sounding that remind of what is at stake, of being together (in an apartness)[6] through writing (sounds), and a giving thanks to and for those musicians that provide a possibility for spaces to resound this.

Charles Uzor’s work 8’46” subtitled George Floyd in Memoriam is a work written in 2020, from the geopolitical space of Switzerland, shortly after George Floyd’s murder and the incipient of global Black Lives Matter protests. It consists of 7 minutes and 46 seconds of breathing sounds (no instrumental playing) followed by one minute of silence. 8’46” is the first of two works written for George Floyd since 2020 by Uzor and it demonstrates (and places petitions for such thinking) new music’s relation to such protests. Together the two works uncover music’s (and as a specific case new music’s) entanglement with and in blackness. Its title references John Cage’s 4’33” through its similarity in appearance, while at the same time pointing to global protests under the heading of this duration, which was the initial duration used in court in the trial against Derek Chauvin, the police officer who knelt on Floyd’s neck, for what later was revised to well over 9 minutes, killing him.

It is in this poetics of relation played out by composer Charles Uzor that a possibility of new music becomes amplified (and maybe refined): under the heading of this experimental practice a radical shifting of the world can take place. On the one hand the piece points with this duration, as well as its sounds, to an antiblack world, while, at the same time, speaking of another world: one announced by the work in form of the duration as symbol for the mattering of Black lives. The music becomes staging ground for a performative assertion that black lives indeed do matter. Uzor’s 8’46” reflects a sociality, in the breathing sounds made by the performers, as well as in their silences (which both appear also under the heading of a reflection of observers listening as it is in 4’33”), announced in blackness.

In this scene Music, or music we might bring forth under a heading of new music, is stage to rework our relation to the world—whether that is combating antiblack structures or a coming together in/as/with blackness. In this sense it is music and it is blackness, it is improvised sociality, that is to say a consent not to be a single being, it is an impossibility to be without being in poetic relation. Music becomes a space within which people can be themselves in a common that is founded on and with each member’s unique ways—this I’ve learned from musicians such as Cecil Taylor. In Nina Fukuoka’s Sugar, Spice, and All Things Nice this space is shaped too, and what becomes revealed is how such space-formation is always also an act of reworking spaces around this music—from the music’s seemingly more immediate institutional conditions, to larger questions for this planet. A work that takes accounts of experiences of sexism in the music-world as its basis, collected in, and as, the process of compositions in dialogues with others, Sugar, Spice, and All Things Nice’s life moves by way of the social lives entangled in the composer and the music. Music becomes entrenched in lives. Thus this work takes the task of making music as simultaneously a task of being with others in sociality, and does such alongside an aim of revealing and combating sexism—antisocial brutalities. In recounting such brutalities the performers, the composer Fukuoka, and those whose voices flow into the work, reveal this musical work (this working in and with music) as part of social lives—the music cannot be separated, it does not stand by itself because by listening to it we always engage a complex set of entanglements, lives lived in sound, music as living with things. Thus while at once bringing to the fore how women are being discriminated against in the music field the piece also points to, as example, how music has the potential to be that space which allows for flowering of lives. In addressing the problems surrounding it, the music becomes space for that which is denied: (women’s) lives lived in music. Sugar, Spice, and All Things Nice redoubles this fact in its sounding through the use of textures moving out from and in excess of words spoken, and vice versa—not even in the act of performing or listening can these lives be held.

It is in these two examples that I hear what project of futurity I want to partake in. Music as a world redrawing act, as a process of living in poetic relation with each other and oneself (which is not one any longer), that remaps this world, into something else already here, behind a wormhole, some kind of alterdestiny[7] that was always already present but that we can maybe hear better by looking into the stars, to a future and a past as the present. As skins clash, the sound of drums brings a remembering—a reminder, remainder, and rejoining—of that which music always was, how meeting and departing are always the same—sounds in music. Sounds cease to be of relevance as moments in-between and become that which is always already stronger than itself[8] or any self, or selves in or out of touch. It is music, that blackness beyond wholes with holes as holds. “This is the theme of the stargazers, stargazers in the sky. This is the song of tomorrow’s world, a cosmic paradise.”[9] 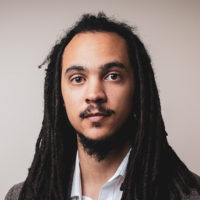 Music, or music we might bring forth under a heading of new music, is stage to rework our relation to the world

Music has the potential to be that space which allows for flowering of lives.

Sounds cease to be of relevance as moments in-between and become that which is always already stronger than itself or any self, or selves in or out of touch.

The article’s title is playing on the Sun Ra Arkestra’s record title Music From Tomorrow’s World.

1. Referencing here Fred Moten’s particular engagement with such translation by Christopher Winks of Édouard Glissant’s phrase “consent à n’être plus un seul.” In Moten’s formulation the consent is not given by a subject but is rather more something like what I would like to call a remembering of what was already there behind the veil.

2. This excerpt is from the email by Frank J. Oteri where he inquired with me as to whether I’d like to write this text.

3. Kodwo Eshun’s seminal article “Further Considerations on Afrofuturism” explores the ways in which afrofuturistic practices use the future to rework the present. To this aim he writes out from the notion of the archeological dig—his paper opens with future life-forms digging in their past, our present.

5. I have to acknowledge here the origin of this word thought as writing coming out from my conversations with Fred Moten.

6. I’m playing with Karen Barad’s brilliant neologism together-a-part that plays out so beautifully the impossibility of actually being apart or together because of, to put it very oversimplified, entanglement, which is also to say, for me, because there is no single entity to be by itself or with someone else. I’m also thinking here of the ways in which this pandemic has played out and upon this together-apart complication. I invoke with such reminder my longterm collaborator and partner Lucy Clifford with whom I’ve learned of this in grooves of sound and life.

8. I’m referencing here George E. Lewis’ A Power Stronger Than Itself, not particularly because of the title’s words but rather because of the book and what it documents: the AACM as a musical collective where music was, and still is, vehicle for lives as well as transformation of spaces and worlds.