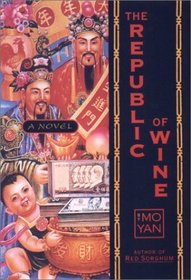 Is Mo Yan a subversive writer or an apologist? His novel The Republic of Wine offers few clues. But if he was a composer he would not be under such scrutiny.

A few weeks ago while having lunch with my mother at the retirement home she lives in, an elderly Taiwanese woman reading from a Kindle struck up a conversation with me about the Chinese novelist Mo Yan who had recently been awarded the 2012 Nobel Prize for Literature. “Have you read him? His books are unbelievable!” she exclaimed. “I’m amazed that the Chinese government is so happy that he won. Some of the stuff he wrote is even more provocative than what Liu Xiaobo has said.” (Mo is the vice-chairman of the state-sponsored China Writers’ Association whereas Liu, the 2010 Nobel Peace Prize Laureate, remains under house arrest in China.)

Over the past couple of weeks I’ve thought a lot about what this woman had to say, especially since it was 180 degrees away from the chorus of acrimony surrounding the Nobel committee’s choice of Mo Yan, a choice they claim somehow vindicates the People’s Republic of China. Many were hoping Mo would speak out definitively about Liu’s incarceration; he did not. In fact, during a press conference ahead of the Nobel ceremony, Mo Yan further angered his detractors by defending Mao and comparing censorship to security checks at airports claiming that both are sometimes necessary. Herta Müller, recipient of the 2009 Literature prize, described the Nobel committee’s choice of Mo as “a slap in the face for all those working for democracy and human rights.” Salman Rushdie, who has yet to receive the Nobel and undoubtedly covets it, got more personal, denouncing Mo as a “patsy for the regime.” Perhaps the most elaborate repudiation of Mo thus far has come from University of California professor Perry Link whom, it should be pointed out, has been blacklisted from entering China since 1996 as a result of his having translated The Tiananmen Papers, a compilation of purportedly classified Chinese government papers which document the response to the student protests in 1989. In an extensive The New York Review of Books essay, polemically titled “Does This Writer Deserve the Prize?,” Link directly castigates Mo’s own writings:

Mo Yan and other inside-the-system writers blame local bullies and leave the top out of the picture. It is, however, a standard tactic of the people at the top in China to attribute the ordeals of the populace to misbehavior by lower officials and to put out the message that “here at the top we hear you, and sympathize; don’t worry that there is anything wrong with our system as a whole.” … Mo Yan’s solution (and he is not alone here) has been to invoke a kind of daft hilarity when treating “sensitive” events. … From the regime’s point of view, this mode of writing is useful not just because it diverts a square look at history but because of its function as a safety valve. These are sensitive topics, and they are potentially explosive, even today. For the regime, to treat them as jokes might be better than banning them outright.

My response to reading all of this has been to go out and buy some of Mo’s books and start reading them. I’m now about a third of the way through his 1992 novel The Republic of Wine (alas, in the English translation of Howard Goldblatt, my one year of Mandarin back in the mid-1980s not being sufficient preparation for reading the original). All I can say is I’m totally smitten with the book—which, on the surface is a detective story about cannibalism in a remote Chinese province but is actually a multi-layered exegesis on whether it is ever possible to discern what is going on with absolute certainty. So am I being duped by pro-People’s Republic of China propaganda as Mo’s detractors might claim or did I discover the carefully crafted criticisms of the regime that my mother’s Taiwanese neighbor claims are there?

I’m not completely sure, and I’m not sure I need to be. Although, it turns out that The Republic of Wine has been banned in China. But this is literature, which is art, and it should operate on a level that’s somewhat higher than the political binaries that have reduced us all to being either for or against something these days. One of the things I love about music, particularly music that contains no lyrics, is that its ultimate meaning will always be ambiguous. Despite the various aesthetic factionalisms that sometimes seem to tear apart the new music community, binaries really have no place in conversations about instrumental music since it really can’t be for or against anything. As a result, composers—for the most part—are never quite put on the same hot seat as writers, filmmakers, and visual artists sometimes are. However, the change in Western perceptions about the music of Dmitri Shostakovich offers an instructive parallel to the reception of Mo Yan. When Shostakovich was perceived to be a Soviet sympathizer, his music was deemed second-rate. But after the publication of Solomon Volkov’s now disputed accounts of Shostakovich harboring secret antipathy for Stalin and his followers, Shostakovich has been hailed as a tormented musical genius whose music contains cryptic cries for freedom. But the notes that Shostakovich wrote are exactly the same whether he was pro or anti-Communist.

Many of the artists who work in art forms whose legacies are all about having specific meanings are the ones who went out on a limb trying to subvert those meanings (e.g. playwrights like Richard Foreman, filmmakers like Jean-Luc Godard or David Lynch, painters like Gerhard Richter, novelists like Gertrude Stein, Richard Brautigan, and yes, Mo Yan). Perhaps this is because, by eschewing precise interpretations, they are aspiring to the narrative opacity and sometimes downright inscrutability of music.

Of course there are those who believe that all art, indeed all human interaction, is ultimately political. And for these folks, what “side” you are on determines whether the art you create is valid or not. To those folks, I’d recommend reading Indian novelist Pankaj Mishra’s rebuttal to Rushdie and other detractors of Mo Yan in which Mishra claims that artists everywhere, including Western democracies, are in some way complicit with the failings of their societies, and to single out artists in a particular society for not being dissident enough is ultimately hypocritical.

Art—whether it be literature, film, theatre, dance, painting, sculpture, or wonderfully elusive music—probably cannot directly change the world for good or ill. But it can help us understand each other better and perhaps, most importantly, offer a window into perspectives that are different from our own and in so doing make us more open minded to all perspectives. And if it really works, binaries have no place there.