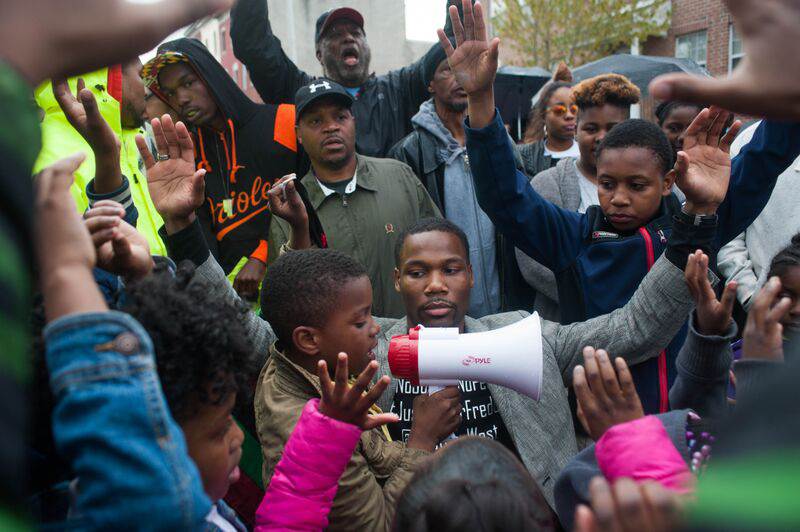 It was Saturday, April 25, 2015. The intersection of Light Street and Pratt Street in downtown Baltimore was filled with protestors and cars were trapped in a gridlock, unable to move through the throngs of marchers. Drivers honked wildly, but not the angry, frustrated honking that normally comes from cars stuck in traffic. It was a ceremonious group-honking coming relentlessly from at least ten different cars. A solitary protestor walked between lanes chanting, “All night, all day, we will honk for Freddie Gray!” The cars honked in solidarity with the thousands of protestors on foot, and for a nerdy composer like me, it was a symphony of microtonal polyrhythms. I got out my phone to take low-quality audio field recordings.

It’s been four months now since the peak of the Baltimore Uprising, city-wide protests sparked by the death of the 25-year-old African-American man Freddie Gray while he was in police custody. As a white member of the arts community in Baltimore, I’ve felt a heavy combination of the pressure to do something paired with a total loss as far as what I should do ever since. If there is one thing I have learned in the past weeks, it’s that the first thing to do is listen. Sit down, quiet your mouth and your mind, and just listen.

I’ve been listening. I’ve heard folks talking about how they or their sons could just as easily have been Freddie Gray. I’ve heard an artist question why the African-American arts community in Baltimore isn’t more welcomed into an annual city-funded arts event. I’ve heard Maryland State Attorney Marilyn Mosby announce the charges against the six police officers in the death of Freddie Gray, ruled at that moment officially as a homicide, in an impassioned speech that served as a turning point in the unrest. I’ve also heard a lot of creative work generated in reaction to the Uprising. Music has a unique way of giving voice to feelings, and it’s no surprise that Baltimore’s local musicians responded quickly and intensely.

One potent example came from jazz pianist and composer Lafayette Gilchrist, in collaboration with R&B singer-songwriter Brooks Long. Titled “Blues for Freddie Gray,” this piece of music ends with the lyric, “We’ve been waiting for so long,” set against the swirling horns that Gilchrist has assembled for the signature strange, full, and beautiful sound of his band, the New Volcanoes. Whenever I catch the group, which plays semi-regularly at the Windup Space in Baltimore’s Station North Arts and Entertainment District, I’m reminded of the denser parts of one of my favorite Radiohead songs, “Life in a Glass House.” The difference is, Radiohead sets that mood for about 25 seconds, while Gilchrist and the New Volcanoes routinely let it go on for upwards of 25 minutes. In “Blues for Freddie Gray,” the horns sound like that feeling we all had in Baltimore right after the really intense part of the Uprising, the Monday of Gray’s funeral, when protests turned violent and Mayor Stephanie Rawlins Blake called in the National Guard and imposed a city-wide (and a lot of people say, unconstitutional) curfew. The best word I can think of to describe the feeling is overwrought. But better than a word is the sound of the music. Long’s lyrics here are powerful, but general. You can hear this same phenomenon in so many protest songs. From Bob Dylan’s “The answer my friend/ Is blowing in the wind” to Rage Against the Machine’s “Fuck you/ I won’t do what you tell me” to the African-American spiritual “We shall not be moved,” the non-specificity of the lyrics allows room for people to attach their own particular interpretation to the songs, and to feel a deep sense of solace, at least for the few minutes the song lasts.

I was amazed by how quickly the hip hop community responded to the crisis by posting recordings online. It’s as if they were sitting at home at night—because they couldn’t be out after 10 p.m.—making immediate and potent music about what was happening in the city. Before the six-night curfew had lifted, Damond Blue dropped “Oh Baltimore,” produced by D Banks. The song opens with a BBC news clip about the Uprising and continues with searing verses about the struggle of being a young African-American man in Baltimore, combined with quotes from Randy Newman’s “Baltimore” from 1977 (and covered famously by Nina Simone the next year). Blue uses quotes from the song, rather than actual samples. On May 20, rappers Young Moose and Martina Lynch released “No SunShine,” a song and video about the Uprising. The video opens with a lengthy sample of Bill Wither’s famous ballad “Ain’t No Sunshine” (1971) with footage of protestor Larry Lomax wearing a “Fuck the Police” shirt while being maced in the face at point blank range and pulled by his hair to the ground. This is followed by video of Kollin Truss being punched by Baltimore police officer Vincent Cosom at a bus stop back in June of 2014 and then it cuts abruptly to footage of the violent protests of 2015, cut with shots of Young Moose and Martina Lynch rapping within a crowd. Much of the rapping takes place in front of street artist Nether’s giant mural of Freddie Gray’s face, painted onto a wall at the site of Gray’s arrest in West Baltimore. The most heartbreaking part of the video is the young kids standing with the rappers, holding up their fists in solidarity. Martina Lynch packs an incredible amount of information into 35 seconds of rapping about the situation, with an especially poignant line “the police don’t know me, but they wanna take out my whole team.” It is notable that both rap songs include quotes from songs from the 1970s. Just like the traffic cone 18-year-old Allan Bullock picked up to smash a police car window on the day the protests turned into riots, the musicians grabbed pre-existing material in order to react as quickly as possible to what was happening in their city. Bullock became famous for doing the right thing and turning himself in, under his parents’ guidance, only to be held on $500,000 bail—higher than any of the six police officers involved in Freddie Gray’s arrest.

Lafayette Gilchrist, Brooks Long, Damond Blue, Young Moose, Martina Lynch: Are their voices being heard outside of Baltimore? I wonder if anyone reading this essay who is not from Baltimore has ever heard any of their work. But I’ll bet you’ve heard the work of Beach House, Dan Deacon, Future Islands, Animal Collective, or Lower Dens, or at least have heard their names. The so-called “Baltimore sound” is being created almost solely by white artists. Don’t get me wrong, I have a huge amount of respect and admiration for these voices. Lower Den’s singer Jana Hunter just wrote a thought-provoking, shit-stirring op-ed for Pitchfork titled “White Privilege and Black Lives in the Baltimore Music Scene.” But just as saying “all lives matter” instead of “black lives matter” is offensive because it minimizes the racism built in to our current system, we need to try to figure out how to make changes in order to hear more African-American voices in the arts. Hunter was clearly thinking along these lines when she used her essay to also create a platform for rapper Abdu Ali to speak directly to Pitchfork’s readership. However, it begs the question: why didn’t Ali write the article himself? Why didn’t Pitchfork reach out to him for an op-ed?

After reflecting on Hunter’s essay and countless others echoing similar sentiments in the past three months, it seems to me that the same systemic problems that sparked the Baltimore Uprising in the first place have hindered the possibility for African-American voices to communicate about these issues across geography. Creative work in a time and place of crisis is essential to a community coping with tragedy and can become a necessary and powerful agent of change. If we truly believe that black lives matter, it’s essential that we commit to hearing what their voices have to say. 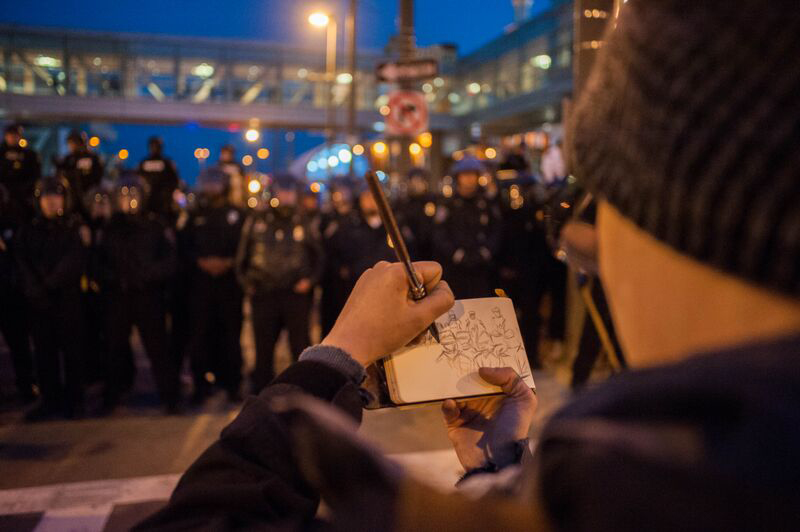