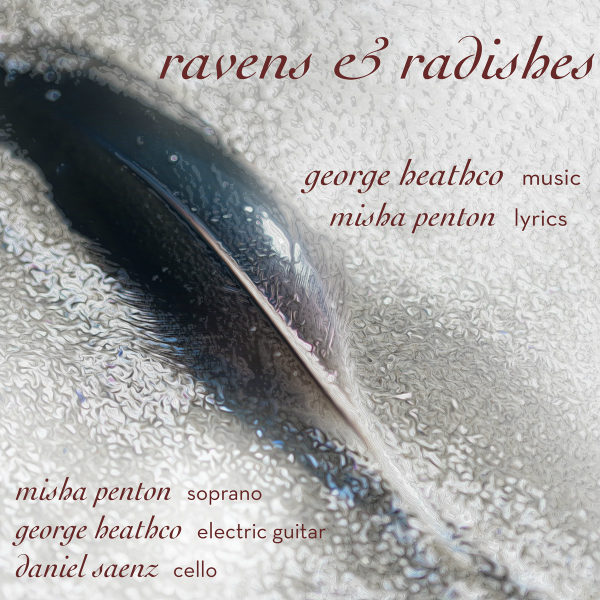 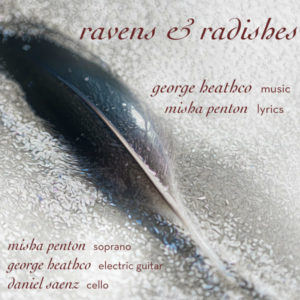 The product of a collaboration between composer/guitarist George Heathco and soprano/lyricist Misha Penton, Ravens and Radishes is a song cycle for guitar, cello, and voice that takes inspiration from classic fairy tales and, unlike the recent film Maleficent, recasts them in a new and interesting light instead of, say, ruining them.
The slow rising double-stopped fourths of the Daniel Saenz’s cello in Witch in Winter recall a sort of metal guitar dirge and match well with Heatcho’s popping, muted clean-tone guitar, the latter like pizzicato. From the small, mid-range chords in the guitar against the cello and Penton’s voice in the opening of Mirror to the somewhat lighter (in the context of the darker brooding surroundings) uneven groupings of rising guitar scales against pizzicato cello of October Ravine, Heathco carefully balances the instruments throughout. 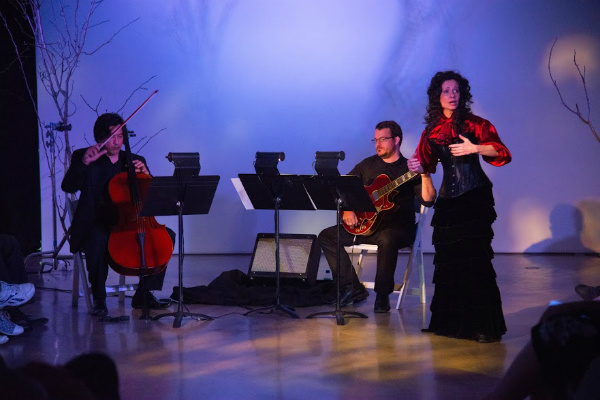 The recording is stark and spare with very modest post-production, which gives it a live quality, one that enhances the primarily dark musical treatment of the text. It feels like it’s happening right in front of you, and nowhere is this more evident than in Sheep’s Clothing. An “A” played on the “D” string of the cello glides in and out of tune with the open “A” string while Heathco trades punchy attacks on the low “E” of the guitar with delicate open harmonics, a bit of musical slap and tickle through the dark undercurrent. This leads to another section in which the guitar is beating polyrhythmic time with chords as the cello and voice trade barbs back and forth.


L’oiseau de Feu sees a return of the rising fourths from Witch in Winter, and though it’s not a guitar piece strictly speaking, here the six-string influence is undeniable. From the oscillation between two notes (transpose and swing those a bit and Detroit Rock City might show up) that serves as motive, to the three-chord rising figure on upbeats that, if isolated and repurposed, could find itself at home in any number of metal tunes—including this one, which is where I’m guessing the rising line might find its inspiration? I always thought it was totally metal, frankly…—the song is rooted in the guitar world both idiomatically and musically. Heathco takes these materials and plants them in new soil, the syncopated groupings of October Ravine reimagined and now emerging in incessant sixteenth note bursts in the guitar and cello, all while Penton works her magic.
NewMusicBox
Written By