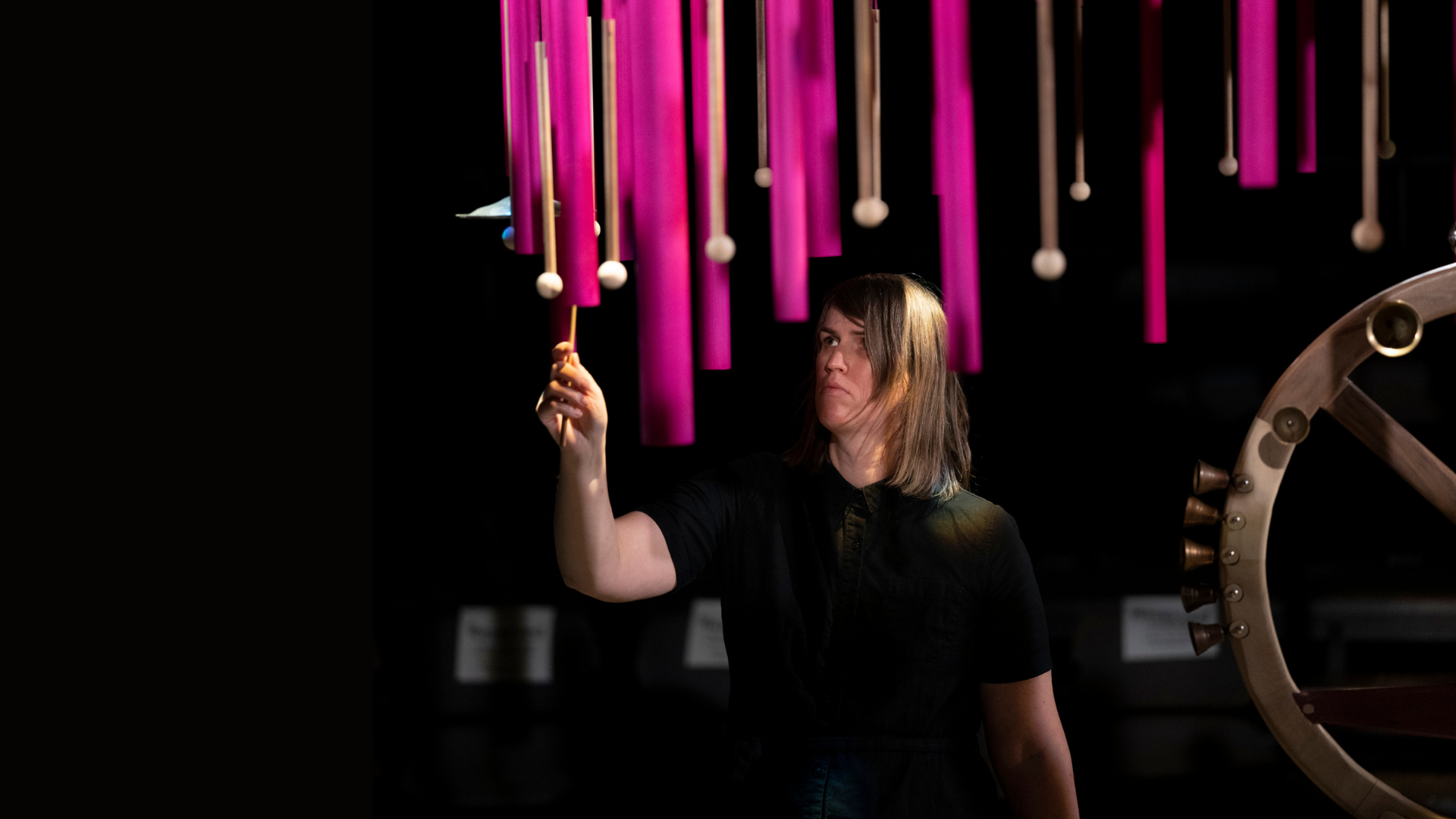 Sarah Hennies was a name that was barely on my radar before the pandemic, but after spending over six months mostly in lockdown I listened to a CD released on New World Records, a label that pretty much always piques my interest, featuring two works of hers, both of which were a little over a half hour in duration. One is a trio for piano, double-bass, and percussion with the peculiar name Spectral Malsconcities which was performed by new music stalwarts Bearthoven. The other is a duo for just piano and percussion called Unsettle performed by the Bent Duo, an ensemble which was also relatively unfamiliar to me. The music seemed to evoke everything I was feeling about this extremely precarious and terrifying time we’ve all been living in, despite the fact that both pieces were composed and recorded before the word Covid became an unfortunate daily household utterance.

I was fascinated and intrigued. I had to hear more of her music and listened to everything I could find, from her early collaborative work as part of the Austin-based experimental rock band Weird Weeds to her multimedia documentary Contralto to extended duration solo and chamber music compositions for various instrumental combinations. Despite the extremely broad stylistic range of this material, it all shared a concern for extremely precise sonic gestures and involved a great deal of repetition, but not guided by any kind of structural process as far as I could discern. Again, very much in the same way days and months seemed to pass over the last two years. I had to speak to her and learn more.

The most significant music has the uncanny ability to tap into a zeitgeist sometimes well in advance of its time although, when I spoke to Hennies earlier this month, she said that she hadn’t associated her time bending compositional aesthetic with our current realities. She did, however, acknowledge the relationship. But everyone listening to this music might come away with a different personal reaction to it and that’s fine by her since how we perceive sound on a psychological level as it unfolds over time is key to the sonic experiences that Sarah Hennies creates, whether it involves hearing layers of counterpoint that are the result of the natural reverberation of a particular physical space or hearing ghost sonorities that aren’t actually there because of the way certain timbres combine.

“Everything for me is about the listening experience,” she said. “I don’t even use quote-unquote systems anymore. … Part of the reason that I like working with repetition so much is that you have this sense that the music is staying in one place, but it feels like it’s developing anyway. And so, it’s like the music is stopped in time, but to me, doing something over and over again, even though the music is not hypothetically changing, your thoughts are changing. Hearing something for one minute is experientially very, very different from hearing it for, let’s say, eight minutes. And so, the listener is changing even though the music is always changing on a micro-level, but essentially you’re hearing the same thing over and over again.”

Sarah Hennies’s scores are extremely economical; the score for the nearly 34-minute Unsettle is a mere two pages. And yet the sonorities feel extremely generous.

“I just think being economical and practical is interesting because you can get at the heart of a sound,” she explained. “I’m not writing melodies and harmonies. It’s like not that kind of music. So it’s about something else.”

Hearing something for one minute is experientially very, very different from hearing it for, let's say, eight minutes.

If I find myself wanting to hear something or do something over and over again, and I can't totally explain why, then that to me is a very, very good reason to put that into music because then you can then externalize those thoughts or see it from a listener point of view.

I just think being economical and practical is interesting because you can get at the heart of a sound.

I'm not writing melodies and harmonies. It's like not that kind of music. So it's about something else.

The easiest way to get a performer to do what I want without a bunch of extra nonsense is something that has played into how I write music really, really profoundly

Everything for me is about the listening experience.

There's no guarantee that a player is gonna play a mathematically perfect C-sharp every time ... something else that I love doing is playing on inherent imperfections in human performance.

Simple thing equals complicated experience. Not to make it sound it too dumb, but that's really it.

There have been a few moments over the last ten to 12 years where I did something, and I immediately thought: oh, I'm somewhere else now.

It doesn't make sense that Orienting Response would be engaging. You know, it's like 45 minutes of bing-bong, bing-bong. But I just found it addictive or intoxicating.

That is something that I still feel I'm doing, to be strange in a way that's not aggressive or dissonant for the sake of dissonance.

I very intensely identify as a DIY artist ... I don't have a world as far I'm concerned, except my own.

This is a semantic thing, but I don't consciously want to go in a new direction.

I don't want to be permanently attached to any organization, or genre, or movement, or whatever. I just want to be out here wandering around by myself and just going where people want me basically.

My experience generates the music, but that's not the thing that I need people to know about.

I didn't want to be "Sarah Hennies: the Trans Composer."

For a long time now I've thought it would be great to write a piece that was three or four hours long.

Plenty of composers flourish within the halls and harbors offered by academia, developing their artistic voices and finding their professional footing; Randy Gibson understood pretty quickly that he wasn’t one of them. While his education now spans training in composition, electronic music, and percussion—including the study of Balinese gamelan, traditional Japanese music, and raga singing—only a portion of that instruction occurred within the confines of the typical classroom. After two years of part-time attendance at the University of Colorado, Boulder, his try at full-time composition study ended after two weeks.

“The university experience was not really for me,” Gibson admits with a shy laugh. A year later, he moved to New York and began studies with La Monte Young. “It was a much larger, more interesting education, I think, than I could have gotten at the school, and I’ve never regretted it.”

If the three-pages-and-growing list of compositions which now crowd his C.V. is any indication, it’s a path for which he need make no excuses. It is, however, one for which he offers a great portion of credit to the role Young has played in his development.

“As soon as I went to my first composition lesson with him, it really just opened my ears and my mind to what had already been present in my work,” Gibson recalls. “These repeated structures, these slow tempos, these longer statements—my studies with him really sort of freed me to be able to explore those and really take them as far as I could.”

The relationship proved to be “a perfect fit,” their first lesson beginning just after midnight and ending six hours later. Though Gibson began by studying composition with Young, that eventually expanded to include raga singing as well, providing additional revelations concerning the structure and the character of the music he wanted to write. He traces subsequent works such as his Aqua Madora (for just intonation piano and sine wave drones) firmly back to this study and the influence of Young, particularly the example provided by The Well-Tuned Piano.

While Gibson is careful not to simply co-opt the music that he’s encountered through his studies, the ritual of presentation in traditions such as raga singing speak to him deeply. Using lighting and incense, he surrounds his own audiences in an experience from the moment they enter the performance space. The compositions themselves explore form and tuning in a way that often leaves room for variation and further exploration with each performance. Out of just intonation, sine waves, extended durations, and close collaborations, Gibson is building a vocabulary for his work that has carried him deeply into a particular sound world alongside a special group of performers who are up for the challenge. This is particularly evident in the large-scale frameworks of pieces such as Doleo Æternus (for soloists, drone performers, and rhythmic performers [any variable pitched instruments] and computer; 90-120 minutes) and Apparitions of The Four Pillars (an evolving composition model for just intonation toy organs, variable pitched instruments, prime harmonic sine waves and harmonically related delay lines; variable durations). If these complexities mean the pieces are not destined to become part of the standard repertoire, that’s fine—that’s not Gibson’s goal. He’s looking, rather, to create a particular and immersive experience for his audience.

Yet even if the strategy of following “an all encompassing theory in which I can create new things” appeals to Gibson, he doesn’t need to yolk the audience with the details. “What I want to pursue is stuff that is beautiful and stuff that is powerful and emotional and is complex, but there’s a simplicity to it,” he explains. “The audience member doesn’t care if it’s the 81st harmonic or the 1331st harmonic. From the audience standpoint, it’s about how the music sounds.”

Admittedly, this may still not be for everyone. “But nothing is,” he acknowledges, “so why not just do the best that I can at what I really want to do.”