A couple months ago Richard Dare wrote an article for The Huffington Post called “The Awfulness of Classical Music” in which he delineates a bunch of off-putting things about what I like to call “the concert ritual”—that is, all the stuff that happens at a concert outside of the music itself. I see articles like this crop up from time to time, usually with the implication that if only we were to change these extramusical factors, people would find classical music much more approachable, less stuffy, and less forbidding. But the concert ritual didn’t come out of a vacuum, and there are actually some good reasons for aspects of this ritual that still apply today. Enforced silence lets the audience concentrate on hearing the music. No clapping between movements allows the audience to perceive a piece as an unbroken whole. In and of themselves, there’s nothing wrong with these things.

No, my main issue with the traditional concert ritual is not that it’s intimidating, necessarily, but that it’s based on an unspoken and faulty assumption. The trappings of the concert hall are meant to let us hear the music free from distraction: As if the music itself could be abstracted from its time and place. As if we could present the music in an environment where other, more worldly concerns won’t cloud our perception, judgment, or enjoyment. As if we could remove the music from all context and level the playing field, so to speak. But if this were the case, if this were possible, why have the musicians dress up? Why not play in the dark all the time? Why have a concert hall at all? 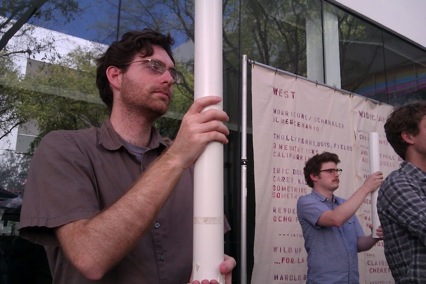 The fact is that this century-long campaign to make music abstract and contextless is a context, and it doesn’t always serve the music in the ways that it intends to. The many recent and often slightly clumsy attempts to come up with new contexts for this music are a testament to this fact. The problem with some of the these attempts is that little thought, if any, is given to the reasons behind various musical rituals, replacing concert music customs with rock music customs for no particular reason. If we put classical music in a bar instead of a concert hall without changing anything else about its framing or presentation, what should we expect? Bemusement from bar regulars and slight frustration from music fans about the ambient noise level, most likely.

I can think of several groups that do successfully alter the concert ritual by thinking carefully about the changes they make—eighth blackbird’s elaborate, choreographed stagings come to mind. But the alterations don’t have to be complicated, because even the smallest changes can have big consequences. Having just performed with wild Up for the first time on Saturday, I’ve been thinking a lot about the way they reframe certain seemingly obligatory aspects of the concert experience.

For example, wild Up doesn’t hand out concert programs. Instead they put all the basic information—titles, concert order, and who plays what—on a big banner with stenciled lettering. That’s it. There are no program notes, which flies in the face of the conventional wisdom of almost every composition teacher I’ve had! Program notes, the dogma goes, give the listener an important window into the composer’s thoughts. But too often at a concert I’ve found myself reading when I’m supposed to be listening. Instead of a window into the music, it becomes something that takes me out of the music.

The lack of a complete program also causes another important change—it means that the conductor and performers have to talk directly to the audience, like Leonard Bernstein did. It creates a valuable rapport, and the sparseness of program information allows for a little surprise about what’s going to happen.

This sense of surprise is an excellent reason to make more radical changes to the concert ritual, or even come up with new rituals entirely. Perhaps the most bizarre moment during Saturday’s concert for me was participating in a Fluxus-inspired tribute to La Monte Young that involved launching ping pong balls into the audience. The audience wasn’t prepared for this in any way, and from my perspective I wasn’t prepared for the reaction of sheer delight from the audience. Inventing new rituals is risky, to be sure, but I hope that we can allow some room for this experimentation and risk. In the end, I think the rewards will be well worth it.