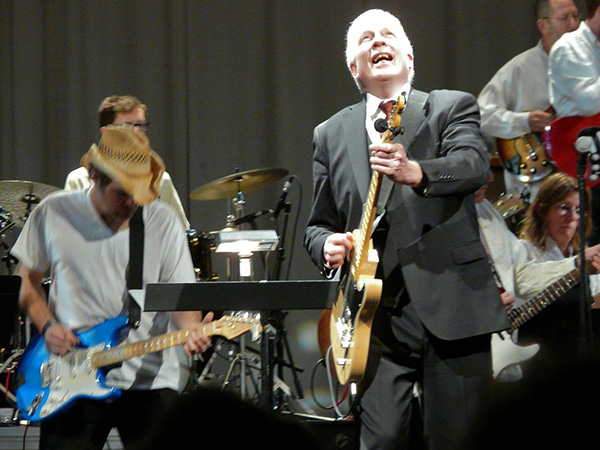 On November 17, 100 electric guitarists gathered with their instruments and their amps on stage at the Craneway Pavilion—a former car assembly plant situated on the San Francisco Bay in Richmond, California—for the West Coast premiere of Rhys Chatham’s A Secret Rose. Written in 2006, A Secret Rose had only received two prior performances, undoubtedly due in part to the scale of the venture: musicians for this performance, which was presented by Other Minds, traveled from Europe, South America, and at least a dozen states across the country to be part of this guitar orchestra performance, conducted by Chatham. 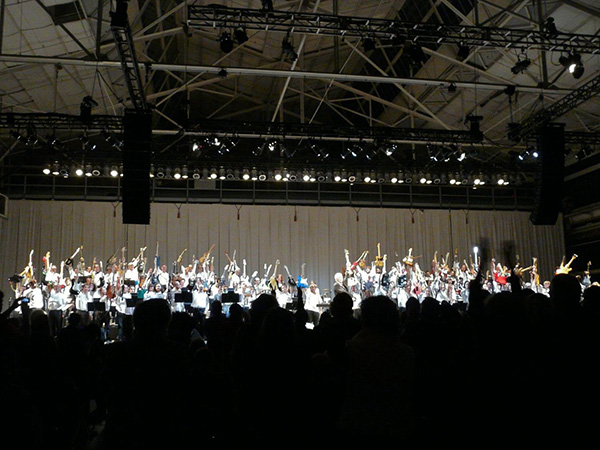 What does an orchestra of 100 electric guitars sound like? Chatham has been exploring the many possible answers to this question for three decades, starting with his 1983 work An Angel Moves Too Fast to See. Built in five movements over approximately 75 minutes (with a short tuning break), A Secret Rose fulfills one’s expectations of 100 electric guitars playing simultaneously in the same 45,000 square-foot room—that is, tongue-lollingly loud shredding that triggers involuntary head bobbing—but Chatham covers far more ground than that, and the use of volume is not simply for volume’s sake. The influence of Chatham’s early work with La Monte Young exploring tunings, drones, and overtones emerges in sections where the fundamental is so strongly established that a broad range of aural images emerge hallucinogenically in the air through the overtones: people chanting and yelling, swarms of insects, giant revving motors, dog whistles, and an airplane all made cameos in my mind’s ear. 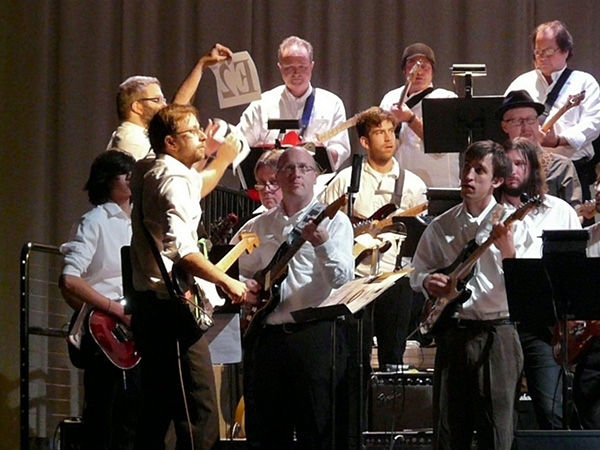 The musicians for A Secret Rose are divided into three groups, each with a section leader (in this case, David Daniell, Seth Olinski, and Tobin Summerfield); each group is further subdivided into two smaller groups. Holding the masses together were Chatham, dressed in a proper suit and tie at the center podium playing the part of the conductor with a baton, and the three section leaders stationed on the sides—cuing, clapping, yelling, fist-pumping, and paper-waving to help keep the train on track. The conducting team was supported impressively by bassist Lisa Mezzacappa and drummer Jordan Glenn, who provided a steady foundation and energetic drive throughout.

Chatham has said, “There’s nothing like the sound of 100 guitars playing quietly,” and he explores this sonority in the third movement, thinning out the texture and having individual musicians play single pitches. Chatham left his conducting post and walked among the musicians, triggering pointillistic mini-bursts of sound as he passed. As the nebula of aleatoric pitches amassed, a giant celestial harpsichord seemed to emerge, with the fingers of the guitarists as the plectra—perhaps unsurprising, given that Chatham’s first instrument as a child was a virginal.

Other sections drew strongly from Chatham’s rock background, with homages and references to myriad styles and artists scattered throughout—each person I spoke to afterwards heard a different selection of influences embedded within the piece. The second movement was at times downright tuneful, a series of giant-scale rock instrumentals; at other points, it presented a great vibrating wall of sound that you could feel on the skin. Chatham set major and minor chords grinding upon each other across the sections, all the more unsettling at a heightened volume. Multiple concurrent meters were frequently used, creating the sensation of a behemoth machine with a variety of differently sized gears, moving itself forward with an immense amount of energy and effort. Despite the near unanimity of orchestration, the textural variations that Chatham found made for a constantly shifting and surprising listening experience.


A Secret Rose was a special presentation by Other Minds, led by the San Francisco Bay Area’s experimental music evangelist Charles Amirkhanian. In June, Other Minds hosted a performance of Chatham’s seminal Guitar Trio at The Lab in the Mission (covered previously in NewMusicBox here) as a preview to A Secret Rose. At an event later that week, a lengthy conversation between Amirkhanian and Chatham was videotaped and posted in chunks on Vimeo. One excerpt, in which Chatham talks about going to his first rock concert ever—which happened to be the Ramones at CBGB—is posted above. Other Minds does an extraordinary job not just archiving the organization’s activities but also making those recordings available to the public. A full recording of this performance of A Secret Rose is scheduled to be posted at RadiOM when it is available.

As the guitarists were tuning after the quietly plucked third movement, I commented to my companion that it wasn’t quite as loud as I had anticipated, since free earplugs were available at the front desk when we arrived. The final movement removed any disappointment on that front: with the full ensemble pounding on one minor chord for minutes on end, overtones began screaming like banshees in the cavernous space of the pavilion, and 100 variations on how rock guitarists move and sweat while shredding came on display. As a final gesture, Chatham himself took up his guitar and turned to the audience, faced up to the skies and fell to his knees, providing that moment of punk rock catharsis that we all had been waiting for.

Composer and electric guitarist D. J. Sparr draws energy and inspiration from interacting with other musicians. “That’s why I compose,” he says, “to get to the point where I can be actively working with other musicians.” A full schedule of composition commissions, performances of his own music and that of other composers, and educational residencies ensures that he gets his fill of that vitality.

Sparr grew up playing electric guitar (à la Eddie Van Halen), but put down his axe for a time during studies at the Eastman School of Music. Then, inspired by the composer-performer faculty members at the University of Michigan, he started performing again within the realm of classical music. He has since performed the music of Michael Daugherty, Paul Lansky, and others, as well as his own compositions, such as his electric guitar concerto Violet Bond, written for the California Symphony where he currently serves as Young Composer-in-Residence.

Beyond the electric guitar, Sparr has built a varied catalog of works for chamber ensemble, orchestra, and vocal music. His short-form opera Approaching Ali, commissioned and recently premiered by the Washington National Opera, is based on the book The Tao of Mohammed Ali by author Davis Miller, with a libretto by Mark Campbell. It tells the story of a writer at the brink of middle age who visits his boyhood hero in person in an effort to rekindle the spirit and enthusiasm of his youth. This poignant and charming work could serve well as an introduction to opera for people of any age or background.

Educational outreach is a substantial part of the composer’s work with the California Symphony, as it was during his three-year residency with the Richmond Symphony’s Education and Community Engagement Department and while he served as a faculty member at The Walden School. He takes cues from the performance and creativity workshops of Michael Colgrass for his own educational work, employing exercises such as drawing graphic scores and conducting on the spot. “It’s fun to work with kids, and it’s nice to get to know them,” explains Sparr, “and then some of them show up at [my] concerts, so it’s pretty cool.”

Early on in his composing career, Sparr found that what he needed to realize his own artistic goals was not located in Los Angeles, New York, or other large cities, so he left the urban landscape, moving first to the mid-Atlantic coast, and then to Richmond, Virginia to build a life that focused on the more basic needs of, as he puts it, “shelter, food, and writing.” He continues:

The combination of finding the people who support you, writing as much music as you can, and being as nice to everyone you meet as you possibly can, including being happy for their successes—there’s a saying that “A rising tide lifts all boats”—is really the key to making it work. And the composing world looks pretty great right now.

With Approaching Ali under his belt, a new large orchestra composition in the works to wind up his California Symphony residency, and a debut CD of his chamber music works coming out on Centaur Records later this year, it looks as if Sparr is reaching musical high tide. Hopefully his electric guitar case is waterproofed.