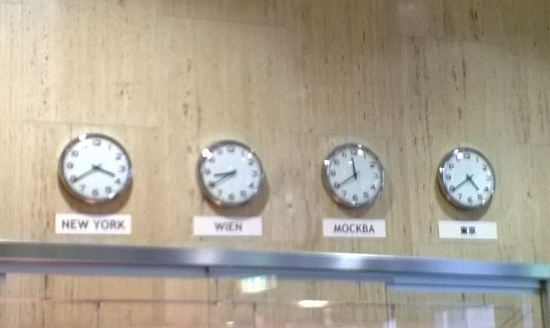 So what time is it anyway?

Although I returned home last Sunday after having spun around the globe, I was rather surprised that I had no jetlag the following day when I returned to the office. I was fine on Tuesday and most of Wednesday as well. But once Thanksgiving arrived on Thursday, my sense of time grew less certain. Friday was considerably worse, and on Saturday and Sunday I was a complete mess.

In my more lucid moments during the holiday weekend, which were sporadic at best, I began to wonder why it was that my inner clock was somehow able to align itself properly during the work week and totally conk out once I spent most of my time at home. The sun barely ever shines through my ground floor apartment so perhaps it was a by-product of underexposure to natural light. But there are no windows in my immediate vicinity here at the office, so that can’t be it. More likely, it was due to having a fixed timetable of activities earlier in the week and a subsequent freeform schedule in the days immediately following that. On Monday, Tuesday, and a good part of Wednesday, I never lost track of what time it was in New York City because there were constant reminders of the time.

Anyway, all this got me thinking about music and the way that music plays with listeners’ perceptions of chronological time. Many people have commented about how a live performance of an exciting new 25-minute piece can feel like it has raced by in only 10 minutes whereas an unfamiliar 10-minute piece that is extremely difficult to get into could feel like it’s gone on for more than a half hour. I’ve certainly had both experiences over the years.

Of course, there are ways of cheating these experiences when the durations of all the pieces of music being performed are listened on a program. Upon occasion, I’ve snuck a peek at a watch to know how much time was left, both for pieces with which I was completely enamored and ones I could not wait to have end. Sometimes I like knowing the duration in advance for a piece of music I’ve never heard before since it can help me to get a sense of the structure of the piece. For example, if something that particularly captures my attention occurs, I’ll look at a watch to determine at what point in the piece it happened.

However, more often than not, I find that knowing the precise length of a piece can spoil the magic of its ability to suspend time. When I’m listening to music, I prefer not quite knowing what time it is and allowing the music to take me to a place that is somehow beyond my own perception of the passing minutes. This is probably why I’m also ultimately O.K. with the jetlag, which is a small price to pay for the opportunity to see other places and have new experiences.