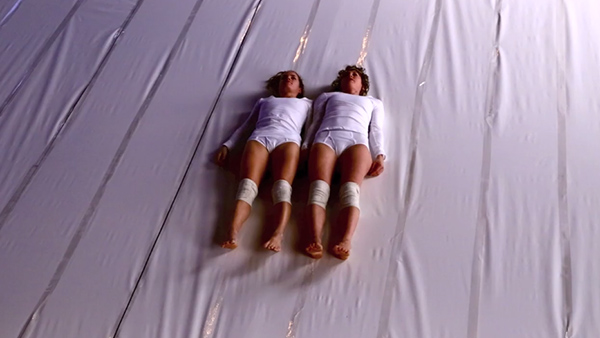 This week marks the Disquiet Junto’s 134th composition challenge. We’ve covered the activities of this SoundCloud group and their intriguing creative homework assignments before, but the current project to compose music to accompany a dance video by choreographer Cori Marquis seemed particularly intriguing. The visual movement is complete, but its sound has yet to be crafted in response.


Those who choose to participate in this week’s challenge will select a one-minute section to score and then will share it with the group as per usual. In addition, Marquis may use some of the created music in her final cut of the video. If you’re reading this post and would like to find out more and/or join in yourself, you can get all the necessary details here. Deadline is Monday, July 28, 2014, at 11:59 p.m. (wherever you are).

I was intrigued by the idea of a dance piece that was presented as an edited video rather than delivered as a live performance, and I wanted to learn more about how Marquis made use of sound in her creative process. She invited me to quiz her on her work and methods.

Molly Sheridan: The clip above is actually my first encounter with a dance piece that is specifically designed so that an edited video presentation is the performance, not just a documentation method. Can you educate me a little bit on the development of this in the dance field? How it evolved and how it’s being used by yourself and others?

Cori Marquis: Film and camera technology has played a progressively greater and greater role in dance since the start of their relationship. (Maybe surprisingly, dance and film have actually had a really long history together.) Simple documentation of dance work actually began in the late 1800s, then Fred Astaire/Ginger Rogers and Gene Kelly really popularized dance specifically for film in the ‘30s, ‘40s and ‘50s. It was many of the modern greats like Merce Cunningham and Martha Graham who started to play around with film technology when it became available to them somewhere in the ‘70s or so. So dance has been documented by film, film has been a part of live dance performances, and dance films have inhabited a completely separate form altogether.

I think the film/dance relationship is attractive to choreographers for so many reasons. Even just documentation of dance work is significant; unlike music or theater, there is no universal way to score or script dance work to be used in future generations. My choreography notes are pretty useless and nonsensical to anyone but me, which I think is more often the case than not. While film as documentation never quite does a live performance justice–it loses the immediacy; the possibility of new mistakes; the community, energy, and ephemeral nature of live performance–it does preserve work that otherwise might be completely lost without it being a living kinesthetic history on current bodies. Even casually, I use it in rehearsal often.

Then looking at film as the mode and medium for dance work opens up an entirely new form altogether, and in its own right. You can get the intimacy of film with the physicality of motion; you can alter the viewer’s visual perspective as well as the timing and pacing of the work. The editing becomes part of–or maybe most of–the choreography. You can bring site-specific work beyond the location. You can create physically unfeasible images. And logistically, it can be presented an infinite number of times, with the possibility of a huge geographical reach and scope in audience without the financial obstacles of touring a cast around the world.
All of this is to say that dance and film, and dance films, are nothing new. I think what is new is the ability to make that kind of work without an enormous budget, in this YouTube generation sort of way. But I don’t think that makes dance films reductionist, as that might seem in their ability to become ubiquitous. It somehow seems related to the explosion of other media in our generation, how TV shows have gone from often being “reductionist” sitcoms to fully fleshed-out stories that cover far more ground (with incredible production values) than a two-hour play or movie could (think Breaking Bad, Mad Men, True Detective, etc.). I think the relationship between dance and film has moved from a better-than-nothing way to document (reducing the work’s full impact) to a form that opens up entirely new vocabularies and possibilities, adding and deepening the way we can communicate and tell stories (even if in abstraction!).

MS: Can you give me a little of the program note for the piece you’re asking the Disquiet Junto Project participants to score?

CM: The idea for this dance film is rooted in the ephemeral nature of live performance, and specifically the transient way dancers trace and use space. I wanted to investigate what it is to record these floor patterns and points of contact so that they do not disappear the moment they occur. A clear vehicle for this became paint on bodies, with dance on film. The work uses multiple colors of paint to track two dancers: their points of contact with the floor, themselves, and each other; in athletic phrase work; partnering; and nuanced improvisation. The film primarily utilizes semi-aerial and intimate close-up shots.

MS: Did you have a sound in mind for this piece as you choreographed it?


CM: I didn’t have any specific sound ideas for this piece–I still don’t. I obviously have different sounds and types of music that I like, and I can imagine some types of sound that would work well for the film, but I was excited to see what tones and pacing would emerge from the phrase work and the editing itself. I’m not a musician, so I’m excited to hear what far more musically creative people will develop using this film as source material. I had different music playing during the choreography process, during filming, and even while I was editing, but nothing that I became tied to or tried to marry to the material.

MS: How do you typicality work with music when you choreograph?

CM: My starting point for a piece is usually conceptual in nature, some idea that I’m interested in investigating. This quickly becomes movement, and only later becomes scored. I usually just have a current playlist that I’m interested in playing during rehearsal, so I do like dancing to music. But set music for specific sections of a larger work tends to come much later in my process. We often try sections with many types of songs to see how it changes the movement. Sometimes I stumble upon it while I’m working–where everyone in the room feels the “aha…that’s what this section sounds like!” when a section fits really well with a song. But while the music certainly informs the shape, time, and structure of a section, I usually end up altering or editing the music in some way to fit the choreography (which I just do in GarageBand). I like using melodic stuff, often electronic, sometimes experimental, sometimes pop, but almost never music that’s hard to listen to. I like music that makes the audience–and the dancers–want to dance.

MS: How did you come to decide to collaborate with the Junto project to score the film? What was interesting to you about that idea and how does it interact with your artistic motivation on the dance side?

CM: Marc [Weidenbaum, moderator of the Disquiet Junto] and I met during an interview for his book on Aphex Twin. (I used an Aphex Twin song for a quartet I choreographed a number of years ago, and Marc stumbled across the video online and contacted me.) He was really interested in the idea that music is often secondary for me, and it’s usually a stressful process trying to find music to fit a work. I’ve definitely been interested in collaborating with a musician for a long time, and this project seemed like an excellent way to explore that for both me and the Junto Project. Historically, social and performance dances were developed based on music. I like this idea that came with modernism that we can reverse that direction if we want–that dance can be the foundation, the source material, the thing that comes first, and music can stem from that. I think it only deepens and enriches the possibilities of performance if the relationship between music and dance can be reciprocal–more like a feedback loop than unidirectional with music always first.

***
The conversation has begun! Here are the tracks submitted so far:
NewMusicBox
Written By