Last year I spent most of my birthday wandering through various New York City galleries to see tons of recent visual art. This year, visual art also played a role in the day’s activities (I finally made it to the 2012 Whitney Biennial) but I devoted a significant amount of energy to sating my other senses as well, all of which presented different curation models. 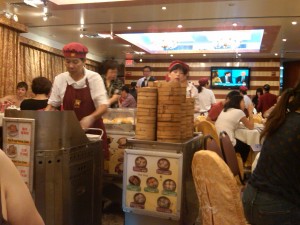 My kind of traffic jam: the dim sum carts at Golden Unicorn.

The day began with tasting a nice range of the dim sum at Golden Unicorn on East Broadway in Chinatown, my favorite place to eat dim sum in New York City. (I didn’t eat enough Cantonese food in Hong Kong!) As in most classic dim sum places, although there is a menu, the way the food is normally ordered is directly from waitresses who roam around the restaurants with carts hawking the most recently cooked up varietals. So, instead of making a decision about what you are going to eat from a verbal description on a menu, customers have an opportunity to see and smell the aromas beforehand, which is extremely effective incentive to ordering a lot of things you might otherwise not have ordered, as well as a lot more food than you probably need!

A short subway ride uptown took me up to the Whitney Museum of American Art which every two years offers a retrospective exhibition of what is new and exciting in the world of visual art. Originally these retrospectives were devoted exclusively to art produced in the United States, but recent biennials have included international work as well. While it would be great to get a sense of the latest developments in visual art from all over the world, such an undertaking is probably too ambitious for any one institution, let alone one whose presentation is contained within one Manhattan building. And this year the Biennial attempted to embrace more than just visual art by including a series of musical performances as well (including avant-garde rock pioneers The Red Crayola and, on the day I was there, jazz pianist Jason Moran and mezzo-soprano Alicia Hall Moran). The range of work presented at the Whitney this year is so broad that its being brought together under one roof seems somewhat random. In fact, that seeming randomness was further compounded by significant portions of the exhibition devoted to work that was created much further in the past than two years ago. For the 2012 Biennial, the seminal German film director Werner Herzog created a film montage of works by 17th century Dutch artist Hercules Segers (c. 1590–1638). Plus there was an entire room of work devoted to the forgotten eccentric Texas painter Forrest Bess (1911-1977), whose work was more compelling to me than most of the work on exhibit that was actually created between 2010 and 2012. (That said, I quite liked the paintings of Andrew Masullo and the sculptures of Vincent Fecteau, both San Francisco-based artists, and it was very difficult for me to draw myself away from Lutz Bacher’s Pipe Organ, an installation whose centerpiece is an old, seemingly decayed Yamaha organ whose keys are triggered by a computer program yielding a random array of harmonies and rhythms—totally my kind of thing.) I should point out, however, that presumably the “art work” Biennial spectators were supposed to be considering was not any of the paintings of Forrest Bess, but rather their collection in the room by sculptor Robert Gober. Another work presented at the Biennial (by Nick Mauss) recreated a 1939 antechamber of the French perfumer Guerlain which anachronistically incorporated art works by Andy Warhol and others. Curation itself was in fact the theme of this year’s accumulation of art—the 2012 Biennal was supposedly about how our perceptions of art and everything else are shaped by the way things are packaged and presented.

Ultimately, I was disappointed. But luckily my encounter with a fake Guerlain display room was followed by visits to several real perfume emporia which inhabit Madison Avenue. Two deserve special mention here. I had never experienced any of the singular scents created for the firm of Frédéric Malle (the nephew of the famous French film director Louis Malle) before discovering the sole Frédéric Malle boutique in the United States on the corner of 72nd Street and Madison Avenue. I was immediately impressed that, unlike any other perfume brand I know of, Malle’s perfumes prominently feature the name of each of the perfumes’ “composers” on their bottles. (I love that the name for someone who creates a perfume is composer.) However, perhaps even more impressive than Malle’s giving credit where credit is due, are three large vessels, reminiscent of the tanks in Altered States, in which a few spritzes of a scent are sprayed and effectively contained for their olfactory perception by visitors to the boutique. It was a great way to experience Jean-Claude Ellena’s 2003 almond-themed Eau d’Hiver, but Edouard Flechier’s all-encompassing Une Rose, also created in 2003, didn’t need the assistance. Remarkably, the blotter a dollop was sprayed on Saturday still holds the scent two days later. 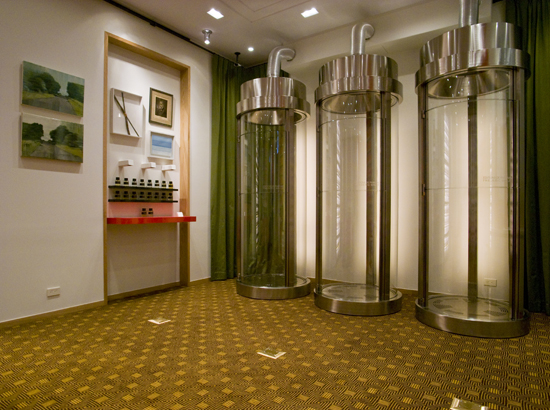 Perhaps even more extraordinary, though, was a fragrance I smelled composed by Annick Ménardo and manufactured by the New York-Grasse firm Le Labo called Patchouli 24. It, too, has remained perceptible on the blotter after 48 hours and is truly strange—as its name suggests, it is based on patchouli but it smells somehow barbecued. Le Labo’s fragrances are part of a massive display of fragrances at Barney’s, whose offerings trump Macy’s, Bergdorf Goodman, Bloomingdale’s, Saks, and every other place I’ve visited since becoming obsessed with perfume after experiencing The Scent Opera three years ago. Like the waitresses who deal in dim sum at Golden Unicorn, the sales reps at Barney’s various consignment stands lure you with their offerings by dazzling you with their olfactory possibilities. But after about ten different scents, it is difficult to perceive anything. 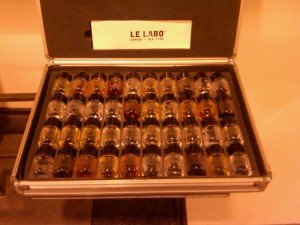 A scent kit issued by Le Labo (no longer available) that enabled people to build their own scents; talk about information overload.

This is not true for experiencing tons of pieces of music, which I have done time and time again for years and did so again to cap off all these other sensory encounters. Saturday night was the final concert of Carnegie Hall’s 2012 installment of Spring for Music, a festival offering a week of adventurous programs by North American orchestras. Last year I went to three of the seven concerts. I planned to outdo myself this year and go to all six concerts. Jetlag got the better of me the first night, so I missed the Houston Symphony’s Shostakovich extravaganza, but I attended everything else. There were many aural delights throughout the week. On Thursday, the Alabama Symphony (under the direction of Justin Brown) opened their concert with a fascinating new piece by Avner Dorman called Astrolatry (I’m eager to see the score) and closed it with an incredibly insightful reading of a piece I thought I had heard enough times not to be surprised by, the Seventh Symphony of Beethoven (Beethoven?!?). The next night, Edo de Waart led the Milwaukee Symphony in a very lush performance of Qigang Chen’s Chinese-music-meets-Messiaen cantata Iris dévoilée. (To drive home the connection, there was also Messiaen on the program.). But until Saturday, the highlight for me had been Wednesday’s stunning performance by soprano Hila Plitman and the New Jersey Symphony Orchestra conducted by Jacques Lacombe of Edgard Varèse’s final composition (the unfinished Anaïs Nin-inspired Noctural, which was completed by Chou Wen-Chung), even though for most people in the audience it seemed to be trumped later that evening when Marc-André Hamelin joined the orchestra to play Ferruccio Busoni’s 70-minute everything-and-the-kitchen-sink Piano Concerto (1904), which ends with a male chorus. 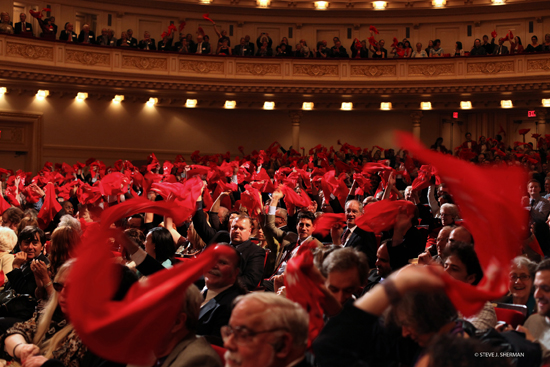 The most enthusiastic audience of the week by far was that of the Edmonton Symphony Orchestra which included 1100 Edmonton residents (who flew to NYC just to attend the concert), among them the town’s mayor and several members of the Canadian Parliament. Photo by Steve J. Sherman; courtesy Véronique Firkusny at Mary Lou Falcone Public Relations.

But Saturday’s concert, by the Nashville Symphony under the direction of Giancarlo Guerrero, was the program I wanted to hear most of all. It opened with the Larry Austin completion of Charles Ives’s final composition, the Universe Symphony, which he worked on, on and off, for almost 40 years until the end of his life in 1954. It remains one of American music’s most enigmatic and controversial works. While Saturday night’s performance did not definitely answer any of that work’s mysteries, it certainly shook up Carnegie Hall with its 5 conductors and 20 percussionists scattered across the orchestra. 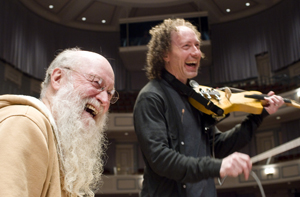 For Terry Riley’s new electric violin concerto, The Palmian Chord Ryddle, the orchestra was joined by Tracy Silverman, who proves beyond a shadow of a doubt that a violin can rock as hard as a guitar. If that wasn’t enough, they followed all that with Percy Grainger’s The Warriors, a 1916 composition for large orchestra featuring three pianos and almost as many percussionists as the Ives. This work also required multiple conductors. It was Grainger at his wildest. Too bad Ives and Grainger didn’t know each other. Or did they?

Usually I attend art exhibitions, restaurants, or perfume shops and contemplate how much music presenters can learn from what these other communities do. But this time around, the music people totally got it right. The music proved to be my favorite part of the day, although I’m also still thinking about Patchouli 24, can’t wait to return to Golden Unicorn, and think that next year I’ve got to find a way to have an encounter with something tactile as well.