This is the third in a four-part series about the important role female mentors have played in developing my artistic and civic identity.

In October of last year, Ashley Fure became a mentor to me without her knowing it. Fure was a guest faculty member for the LA Philharmonic’s National Composer’s Intensive, a weeklong workshop with wildUp culminating in a day of performances on the Phil’s Noon to Midnight Festival. I had known and admired some of Fure’s music and was looking forward to matching her personality to her sounds. Additionally, my Facebook news feed had been abuzz with citations of her piercingly eloquent article about gender, risk, aesthetic politics, and pigeonholing. 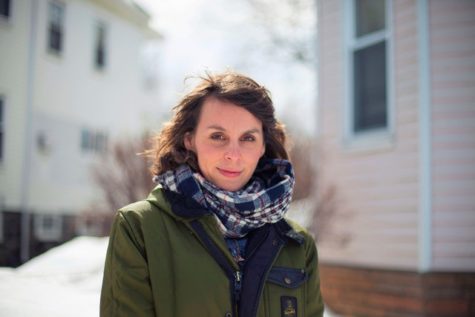 When Fure presented her recently premiered piece Bound to the Bow for orchestra and electronics, I was mesmerized. It was exactly the inspiration I needed after about eight months of not composing much, and not composing anything I was particularly happy with (including the piece to be performed later that week). Descriptions of music I love always feel trivial, but for the sake of this anecdote, I’ll mention that I was struck by its timeless fluidity and completely engaging sense of pacing. The propeller-like sound source that was the basis for the seamless integration of orchestra and electronics was hypnotic, as was the way this sound melted into and filled the cracks of lush harmonies and timbres.

Beyond the striking impression of the music, I was moved by Fure’s comments about it. She described how her brother’s vocation as an architect was often a source of inspiration to her. A designer of buildings, she explained, creates a sturdy foundation, immobile and rooted in solid ground from which a structure can be erected. A designer of ships, however, has eyes for flexible rather than rigid foundations. Yielding to currents from every direction, a hull too rigid is bound to break.

Fure likens this architectural approach to malleability to her musical approach to time passing. She imagines her music bending to and tolerating resistance from a twisting chronology. Time is Fure’s ocean, and her music exists in its expansive mutability.

Time is Fure’s ocean, and her music exists in its expansive mutability.

This metaphor resonated with something that’s been nagging at me in my work ever since I can remember: my music and general modus operandi suffer from a stringency that can result in a sense predictability and constraint by the logic I’ve imposed upon it. I am building cement foundations, not hulls. I’d been mulling over this analogy when Fure congratulated me on the performance of my piece a few days later, and I confessed to her that I felt it was unsuccessful. Fure thought carefully about this, and ultimately suggested that maybe I was dissatisfied with my music because I didn’t allow room for chaos. While it is my habit to associate the musical detail I love with order, maybe I might search for disorder in my details instead and see what forms emerge.

Fure didn’t realize it, but she touched me to the core with her advice. Ideally, I want my music to wail an emphatic “yes” to bold expression. But I have yet to reconcile the inherent instability there is in such a cry with the conviction inherent in the vociferous “yes” that, for example, called out from Fure’s Bound to the Bow. The timing of Fure’s comment, mingled with respect for her artistry and amiability, has really shaped the way I’ve thought about composing this year. I go back to that conversation again and again as a sort of creative reset. It’s given me fuel to keep writing while concurrently being open to questioning why and how I’m writing.

These mentorship moments cannot be planned or predicted, but often make up the cohesive trajectory that forms a whole person. In 2013, I’d emailed out a recording of my first big orchestral piece, Passacaglia, to friends for feedback. Nina C. Young was the only person to respond, and she did so with a long, detailed email of her thoughts about the piece and my work moving forward. That email, full of loving and constructive critique, continues to shape my approach to orchestration.

We are perpetually both teachers and learners.

Advice or the spontaneous outreach of compassion at the right moment can turn anyone into the most important source of guidance for someone else in an instant. Because of my serendipitous experience on the receiving end of momentary mentorship, I feel it’s important to consider this possibility when we engage with each other in our community. We are perpetually both teachers and learners, and in any given interaction we might switch between being one or the other. 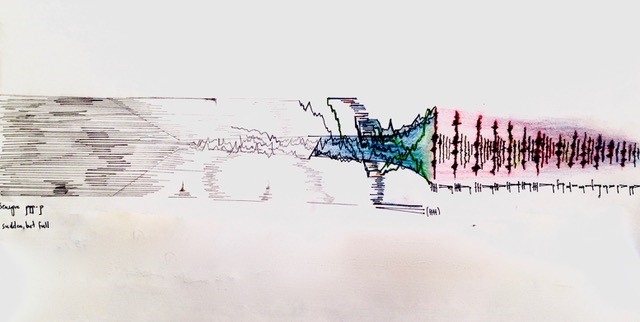 A sketch of the form of a recent piece of mine, Leaf Fabric, in which I tried to capture Fure’s suggestion of infusing a form with more chaos.