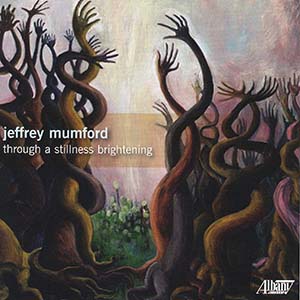 Jeffrey Mumford’s recent 2-CD album through a stillness brightening features a selection of imaginative, skillfully executed solo and chamber works to fire up the ears. The composer’s evocative titles, always written out in lower case à la e.e. cummings, set the stage for similarly poignant music, rife with dramatic gestures and unexpected twists such as languid, sustained timbres that transform on a pinpoint into scampering flurries of notes or edgy, restless sections of double-stops. Mumford studied primarily with Elliott Carter—the influence is audible—but Mumford’s music has a powerful style very much its own, to be heard in his use of rhythm and counterpoint, and in the way he conceives of musical space and time.

The list of musicians involved is a potential dream team for tackling the challenges inherent in this type of musical complexity. Miranda Cuckson’s performance of an expanding distance of multiple voices for solo violin is ravishing, as are the expertly wrought performances of wending by violist Wendy Richman, to find in the glimmering air…a buoyant continuity of layering blue by cellist Julia Bruskin, and two Elliott Carter tributes by pianist Winston Choi. Mumford’s sense of instruments in relationship to and in dialogue with one another is revealed in an evolving romance for flute and piano performed by Christina Jennings and Lura Johnson, as well as through the filtering dawn of spreading daylight for viola and bass by Eliesha Nelson and Scott Dixon, to be still more thoroughly elaborated upon in the Argento Chamber Ensemble’s performance of through a stillness brightening, echoing fields…spreading light by the National Gallery Chamber Players, and the Avalon Quartet’s in forests of evaporating dawns.

Many of the performances are live concert recordings, another testament to the excellent musicianship at hand. Sometimes I worry about double portrait CDs, in that music by the same composer doesn’t always hold interest for two solid hours, but that is not a concern with through a stillness brightening; this is an engaging and varied assortment of fine pieces, deserving of multiple listens and careful attention.

The recent death of British composer John Tavener has got me thinking, again, about simplicity and the way we talk about simple music. There’s a weird combination of admiration, envy, and condescension that often comes into play when composers talk about simplicity. We can admire its bravery, its unabashed unembellished-ness. But maybe we’re unsure how to judge it when there isn’t as much on the surface to analyze. And maybe we want to protest, “But I could just as easily have done that,” even though of course we didn’t. Maybe we resent someone calling “dibs” on that idea before we got around to it.

Maybe simplicity is complicated because the difference between a simple idea that is banal and a simple idea that has depth can be extremely subtle. Maybe we can’t tell, at first, which is which. But then, why should this be any different than complexity? Complexity can contain hidden depths, but it can also obscure a lack of substance at its core.

There’s no way to tell, then, on first listen. We can only trust our prejudices or our instincts, and what’s more, we may not even be able to distinguish prejudices from instincts. And maybe the prejudices have rewired the instincts, so that, while being drawn to the immediately attractive idea, we immediately distrust it, because we have been burned too many times by charlatans.
Maybe the non-composer is more likely to trust the naked idea and its fearless charms, while the composer prefers the idea with clothes, with armor. Complexity as a kind of modesty, as shyness, as parasocial anxiety. Maybe this petty yet fundamental disconnect is the source of countless tragicomic misunderstandings between artist and audience.

Then again, maybe I am overgeneralizing (or over-equivocating). There is room in the world for both simple and complex music and for all kinds of interactions between the two, and mapping this strange, non-linear territory is one of the things that new music has gotten pretty good at. The trick is to view it without judging—or to judge anyway while knowing your judgment is wrong. Creation unfortunately demands a perpetual, genocidal sacrifice of possibilities, so we might as well get it over with.