Mention composer and sax/clarinet player Ken Thomson in conversation or seek out his work online, and you’ll pretty quickly get to some description of the intense physicality of his playing (he has been known to jump around some on stage) or his impressive work ethic (he’s involved in more than a few projects, including Slow/Fast, Gutbucket, Asphalt Orchestra, and Bang on a Can All-Stars).

Yet while he’s too easygoing and good natured to actually roll his eyes at me when I open our conversation with a question about this slightly manic characterization, it’s understandable that the pigeonholing is starting to wear thin. “It’s sort of the first thing that people say—’Oh, usually he’s the guy jumping up and down, blah, blah, blah’—even when I’m not!”
Still, he doesn’t deny that he likes to use his body in performance, both for musically expressive purposes and to deal with the more practical aspects of leading a group in often high-decibel environments without the use of his arms. A first violinist’s standard sniff cue will just not cut it.

“I like being physical when I’m playing, and I think that’s really important actually to show that you’re in it,” Thomson explains. But while his onstage persona might—at least sometimes—communicate a high-energy, in-your-face kind of guy, he actually feels much more reserved when away from the stage lights. A consideration of his scores deepens this view—his often-complex work is carefully designed and communicates powerfully in live performance without exhausting the audience. During a recent tour stop promoting his ensemble Slow/Fast’s release Settle, crowd attention never seemed to waver.


It’s a live consumption situation Thomson is careful to facilitate. “I obviously like music that’s exciting, that kind of keeps you on the edge of your seat in a lot of ways,” he points out, and during performance, he’s continuously monitoring the room to make sure the audience is still with him. “I’m really good at seeing yawns,” he admits, “or if I start feeling like we’re losing some kind of touch, it’s a very palpable feeling for me.”

He carries those concerns about attention back to his desk when first crafting music, a process that he has learned to be patient with. Sometimes pieces simmer along slowly for a while, and at other times they must rest entirely some months before completion. “I used to write too quickly, I think, and then I would come back the next day and think, ‘God, this is terrible!’ I’m a better editor maybe than a writer, and sort of give myself time to have fresh ideas along the way.” 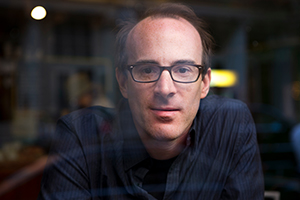 Thomson’s compositional output, showcased by the scores and media presented on his website, now spans a broad range of contexts. One thing that his online reputation is light on, however, is the typical list of schools attended and commissions fulfilled, something he suggests he doesn’t find “super relevant.” When asked, the Columbia grad doesn’t diminish his educational experience, but credits the opportunities it allowed him to learn and perform outside the classroom—both on stage and at his campus radio station, WKCR, where he was jazz director for two and a half years.

Columbia was also where he met and began playing with guitarist Ty Citerman, with whom he works in the collaborative, genre-mashing quartet Gutbucket to this day. When the group was first getting off the ground and exploring their sound, they had a weekly gig at the Knitting Factory where they would try out material. “We started getting better when we started getting beyond adding this plus this plus this,” Thompson recalls, noting that this more complete fusion is still something he’s always looking to do. “I never want to have something sound like, ‘Oh, this is the moment that’s the rock moment, or this is the jazz moment, or this is the contemporary classical moment’—ugh. To me, everything has to make sense.”
But for all the vital diversity his various project lineups and genre influences provide him, Thomson says that in many ways he feels a bit out of touch with the current zeitgeist. “I’m writing music for human beings without electronics. I haven’t done multimedia; I’m not using Max. I feel like I’m totally losing every grant!” he jokes, bursting into laughter.
“It’s really so much about the sound of the instruments and what they do together, and that’s what I love about music. So in that way I think I’m really hopelessly old school, and I don’t know how to fix that. Maybe I shouldn’t.”

Another really special thing about #SBFest13 is that earlier today there were 7 #bassclarinet players in 1 room.that’s right, SEVEN.

You never know exactly what you’ll encounter when you walk into the annual Switchboard Music Festival, but bass clarinets are a safe bet. This marathon-format festival, which has been running for six years, was founded by composer Ryan Brown and two bass clarinet-playing colleagues, Jeff Anderle and Jonathan Russell (who is also a composer). Together they craft a gleefully eclectic eight-hour extravaganza at the Brava Theater consisting of music that avoids easy characterization. There are equal parts notated and un-notated music; improvisation and mad counting are both represented. Since the printed program offers just bare bones information without bios or notes, each set is a surprise entry into an unexpected sound realm, always a contrast from the acts that have come before. 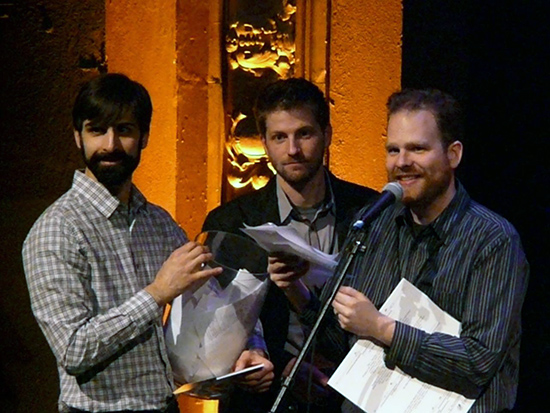 The inaugural festival’s lineup in 2008 concentrated entirely on Bay Area-based artists. As Switchboard has grown, the San Francisco focus remains primary but artists from outside the area have started to be added to the programming. I heard eight of the 13 sets this year, the full list of which can be found here. The day began at 2 p.m. with Tin Hat accordionist Rob Reich’s quintet (accordion/piano, clarinets, vibraphone, acoustic bass, and drums) performing Reich’s music as a jazz/chamber music ensemble. They were followed in quick order by a flute trio, a free improvisation quartet that included double reeds and koto, and a power rock/free jazz set. 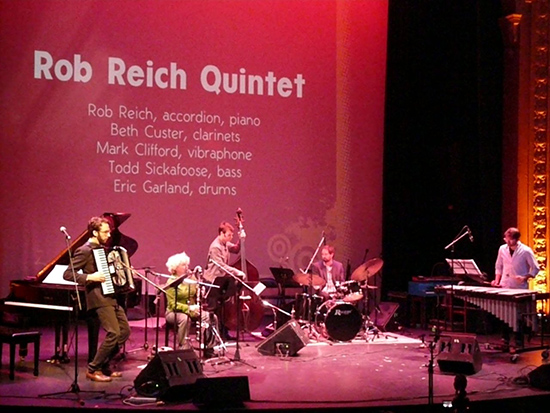 The notated-music bill included piano and percussion duo futureCities, the Areon Flutes trio, a collaboration between the two duos Sqwonk and ZOFO, the band/chamber ensemble Build, and Ignition Duo, a just-established guitar duo that I wasn’t able to hear, playing a new work by Brown. futureCities (Bay Area-based pianist Anne Rainwater and New York-based percussionist Jude Traxler) opened their short set with Traxler playing a Stylophone in Can You Hear Me?, a two-movement piece built on Morse code composed by Wally Gunn, who is a doctoral candidate at Princeton, where Brown and Russell are also studying.


Areon Flutes, based in San Jose and the first flute ensemble to have medaled in the Fischoff Chamber Music Competition, performed the world premiere of Chthonic Suite by Cornelius Boots. Boots is a longtime Switchboard colleague, having founded Edmund Welles, the bass clarinet quartet that Anderle and Russell performed with prior to forming Sqwonk, a bass clarinet duo. Boots, a master of woodwind instruments of all kinds, wrote a three-movement piece that begins with an alto flute solo and adds one instrument in each movement. Particularly memorable was the second movement, “Enantiodromia,” a duet where Jill Heinke and Kassey Plaha wove melodies into Glass-like arpeggiations before trading breaths in a hocket, audibly breathing into their instruments. 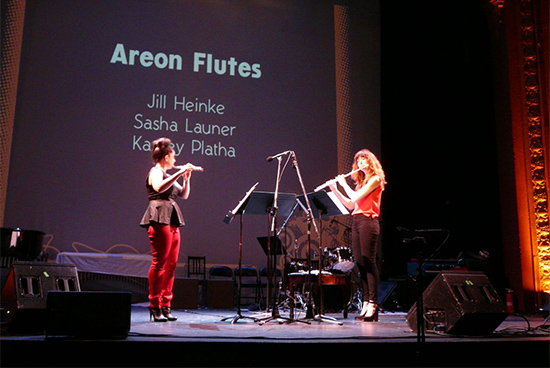 Build, the Brooklyn quintet (violin, cello, bass, piano, drums) led by composer Matt McBane, was one of the two headlining acts to close the festival. They played a six-song set mostly of material from their albums Build and Place. This group, which McBane formed in 2006, exemplifies the “between the cracks” music that Switchboard aims to champion, being both an instrumental indie band and a chamber music ensemble interested in notated process music with mathematical underpinnings.


Among those artists working further afield from the classical/notated music realm was Billygoat, a project of David Klein and Nick Woolley, who create mind-bogglingly complex stop-motion animation films in their garage in Portland, Oregon, score them, and then perform the works live with the film projections. The films are filled with Tarot symbols and mythical figures in states of transformation, providing a dream-state, non-logical narrative. On stage, Klein and Woolley are a two-man band playing an array of instruments ranging from synthesizers and electric guitar to recorder, glockenspiel, and other percussion, with some vocals and whistling in the mix as well. The scores are not harmonically complex but are complementary to the films, which are visually rich and compelling.
Along with Sqwonk, who performed As It Goes Along by Oakland composer Moe! Staiano (which I didn’t get to hear) and Sqwonkzoforus Rex, an entertaining heavy-footed romp by Russell for Sqwonk and the piano duo ZOFO, the day’s bass clarinet tally increased with Brooklynite Michael Lowenstern. Through the live sampling and looping of his instrument, as well as some body and vocal percussion and a harmonica, Lowenstern presented a thoroughly charming and humorous set. For one piece, titled Lost in Translation, two unwitting audience members were invited onto the stage to flirt virtually by triggering samples of phrasebook sentences heavy with double entendres. 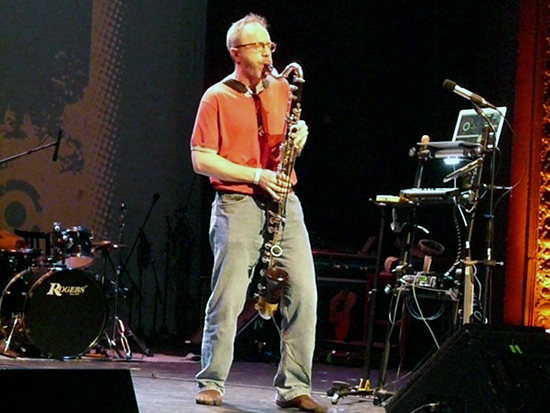 The peak energy level during the day came from the trio Unnatural Ways, led by avant garde electric guitarist Ava Mendoza, with Dominique Leone on synthesizers and Nick Tamburro on drums. Oakland-based Mendoza, a Mills College alumna who has studied with Nels Cline and Fred Frith, started Unnatural Ways as a duo with Tamburro and added Leone early last year. Fresh off a 14-date European tour, the three had clear lines of communication that allowed them to power through a loud set of experimental rock/free jazz that took great delight in drawing from many musical sources, abruptly shifting tempos, and timing the waves of energy crashing in the room. It wasn’t really mid-afternoon music, but I appreciated the chance to hear this performance by artists who wouldn’t necessarily have crossed my path, which is what Switchboard is all about. 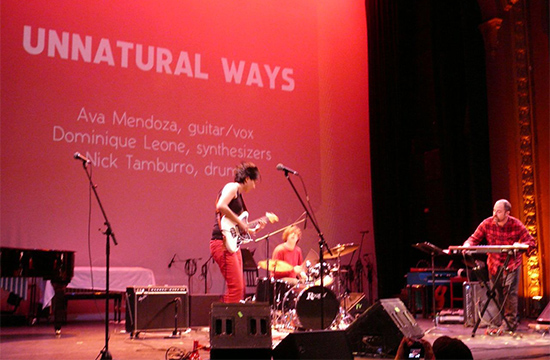