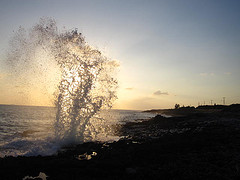 Last month I happened upon an interview with viola superhero Nadia Sirota, in which she briefly addresses the way she breathes while playing. While she understands that some find it distracting, she says it is an integral part of her musical thinking in that “it helps my brain be in the same place as my physical body.” Having worked with her in a recording studio as part of a current musical collaboration, I can confirm that she is a big breather, but it is absolutely in service of the music—as if those huge breaths are landing her smack in the middle of the music, and that music is the only thing that is happening right then in the universe.

As a composer, I’m completely fine with that! Hearing the performer breathing can add intensity to a recording, not to mention serve as reminder that the music is coming from a human. (It is surprising how often that little detail can be forgotten.) Even though I love a pristine recording just as much as the next person, why should that mean there is no audible breathing in it? I have come to like hearing performers breathing in recordings, and that is probably a good thing since I seem to gravitate towards the big breathers anyway. Years ago when I recorded Luminoso for guitar and electronics, my guitarist Enrique had an awful time in the studio at first, because he was self-conscious about his heavy breathing, and tried to quiet down by taking shallow breaths. Needless to say this was a disaster—he couldn’t play a thing! Once I persuaded him to stop worrying about the recording, and just breathe like he always does when he plays, everything went fine. The breath is so connected to the act of playing any instrument that changing the way you breathe automatically changes the way you play. Even sitting down writing music begs an awareness of breath and posture, because it can really make a difference to the music being produced.

I think it’s easy for composers who are not regular performers to forget the physical aspect of musical performance, simply because they are so much in their heads about writing the notes. Composer Pierre Jalbert mentioned in my conversation with him for NewMusicBox that he spends time imagining what it would physically feel like to perform what he is writing, which is a great idea. Years ago I taught myself to circular breathe and play the didjeridoo simply because I wanted to, but the added benefit was that it vastly improved my wind and brass writing. I don’t have to think about phrasing as much as I can feel it now.

The most famous example of idiosyncratic performance habits within the realm of classical music is, of course, Glenn Gould, and lots of performers have things they do that may or may not fit within the boundaries of “standard performance practice.” Professional performers who have retained such unusual habits through years of training, practice, and performance have likely held onto those habits for the simple reason that for them the idiosyncrasies contribute to the interpretation of the work—they help link the brain to the body.