During the 2019 Midwest Clinic which was held over the course of four days (December 18-21, 2019) at McCormick Place in Chicago, the National Band Association (NBA) announced that Omar Thomas has been named the recipient of the 2019 William D. Revelli Award for his 2018 composition Come Sunday. The announcement that Thomas had received the $2,000 cash award, becoming the first African American composer so honored, capped a week during which there were several panels devoted to issues of diversity, inclusion, and equity at the annual Clinic, which is the world’s largest instrumental music education conference, drawing approximately 17,000 attendees.

Omar Thomas has been commissioned to create works for both jazz and classical ensembles and his works have been performed by such diverse groups as the Eastman New Jazz Ensemble, the San Francisco and Boston Gay Mens’ Choruses, and the Colorado Symphony Orchestra, in addition to a number of the country’s top collegiate music ensembles. Born to Guyanese parents in Brooklyn, New York in 1984, Thomas moved to Boston in 2006 to pursue a Master of Music in Jazz Composition at the New England Conservatory of Music. He is the protégé of composers and educators Ken Schaphorst and Frank Carlberg, and has also studied under multiple Grammy-winning composer and bandleader Maria Schneider. While still completing his Master’s Degree, Thomas was appointed Assistant Professor of Harmony at the Berklee College of Music at the age of 23. He is currently on faculty in the Music Theory department at The Peabody Institute of The Johns Hopkins University in Baltimore. Omar Thomas’s first album, I AM, debuted at #1 on iTunes Jazz Charts and peaked at #13 on the Billboard Traditional Jazz Albums Chart. His second release, We Will Know: An LGBT Civil Rights Piece in Four Movements, was awarded two OUTMusic Awards, including Album of the Year. For this work, Thomas was also named the 2014 Lavender Rhino Award recipient by The History Project, acknowledging his work as an up-and-coming activist in the Boston LGBTQ community. Thomas is one of seven members of the Blue Dot Collective, a group of composers dedicated to creating new works for wind band that are “well-crafted, compelling, sincere, exciting, and fresh.” Music by Thomas was played twice during the 2019 Midwest Clinic. The Austin, Texas-based Grisham Middle School Honors Band, under the direction of guest conductor Jerry F. Junkin, performed Shenandoah, Thomas’s soulful and occasionally ominous 2019 reworking of the celebrated American folk song, and the Mt. Pleasant, South Carolina-based Wando High School Symphonic Band, under the direction of Bobby Lambert, performed the second movement of Come Sunday.

Omar Thomas describes Come Sunday on his website as “a two-movement tribute to the Hammond organ’s central role in black worship services. The first movement, ‘Testimony,’ follows the Hammond organ as it readies the congregation’s hearts, minds, and spirits to receive The Word via a magical union of Bach, blues, jazz, and R&B. The second movement, ‘Shout!,’ is a virtuosic celebration – the frenzied and joyous climactic moments when The Spirit has taken over the service. The title is a direct nod to Duke Ellington, who held an inspired love for classical music and allowed it to influence his own work in a multitude of ways. To all the black musicians in wind ensemble who were given opportunity after opportunity to celebrate everyone else’s music but our own – I see you and I am you. This one’s for the culture!”

The Revelli Award, which was established in 1977, is described on the website of the National Band Association as an accolade whose mission is “to further the cause of quality literature for bands in America. Works chosen as winners should be those not only of significant structural, analytical, and technical quality, but also of such nature that will allow bands to program them as part of their standard repertoire. Each year the contest receives approximately 50-80 entries from all over the world. Entries range in scope and quality and are from new to well-established veteran composers. During the evaluation process, entries are narrowed down to a select number of finalists, which are brought to Chicago each December during the Midwest International Band and Orchestra Clinic. There, a panel of leading public school, university, and military band directors meets to determine a winner.”

Although Omar Thomas is the first African American composer to receive the Revelli Award, a female composer has still never received it.

Previous winners of the award include Donald Grantham and Steven Bryant (both of whom have received the award three times), John Mackey and Wayne Oquin (both of whom have received the award twice), Mark Camphouse, David Dzubay, David Gillingham, Jeffrey Hass, Ron Nelson, James Stephenson, Frank Ticheli, Swiss composer Oliver Waespi, and the late Michael Colgrass. British composer Philip Sparke (who has also received the award twice) and Swiss composer Oliver Waespi are thus far the only non-U.S. based composers to receive the award. Although Omar Thomas is the first African American composer to receive the award, a female composer has still never received it. (It should however be acknowledged that there were more works by female composers programmed during the 2019 Midwest Clinic than in any of its previous iterations. In addition to several works by Julie Giroux and Carol Brittin Chambers, concerts featured music by Jennifer Higdon, Kimberly Archer, and Karen K. Robertson. The Portuguese Orquestra de Sopros da Escola Superior de Música de Lisboa, under the direction of Alberto Roque, performed a movement from Carol Barnett’s evocative Cyprian Suite and two movements from Xi Wang’s Winter Blossom: In Memory of Steven Stucky, works which—along with Thomas’s music and Peter Van Zandt Lane’s Astrarum, performed by the Osakan Philharmonic Winds during the final concert—were personal favorites of the week.) A complete list of previous recipients of the Revelli Award is available on the website of the National Band Association. 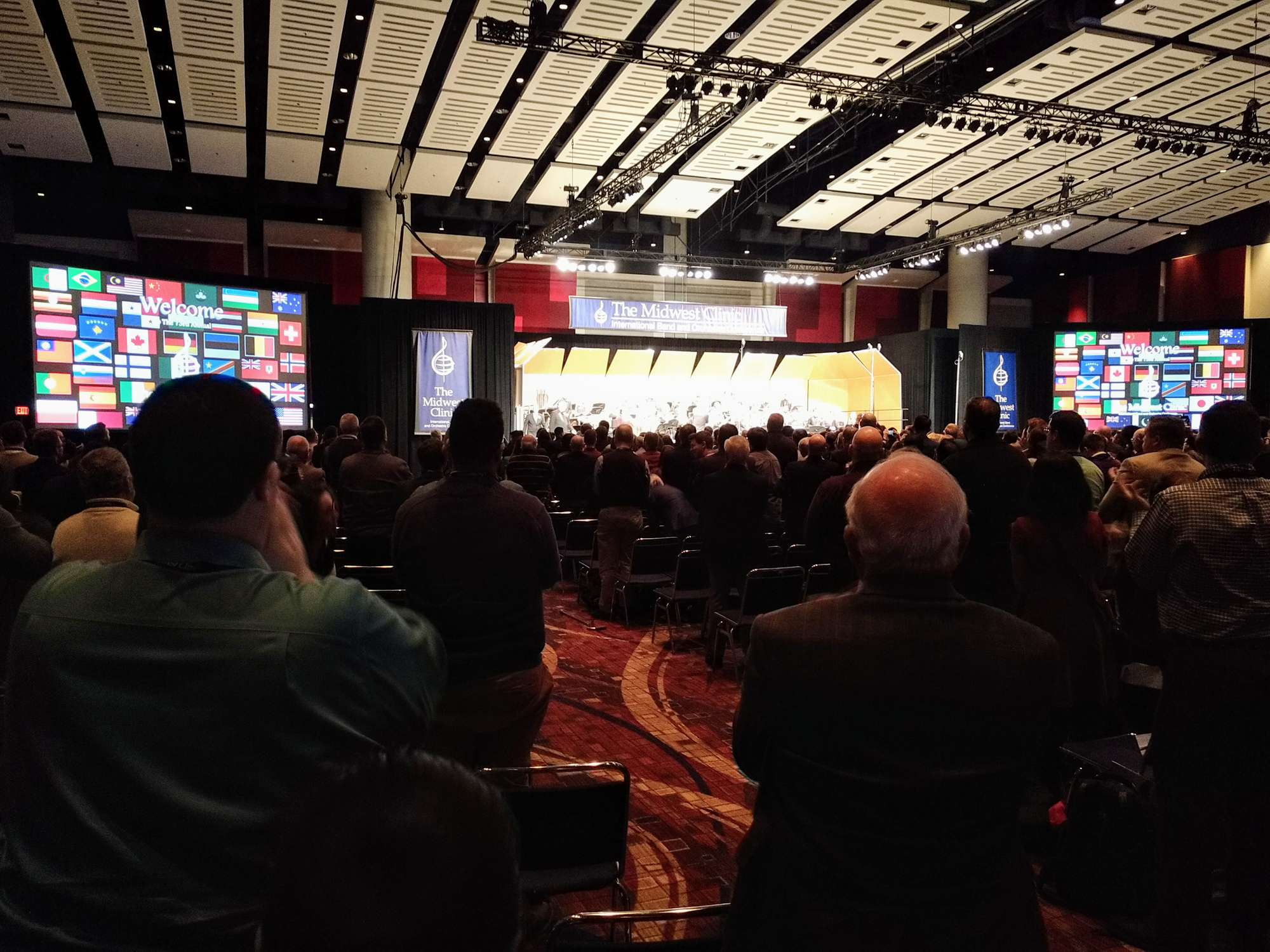 This photo of a portion of the audience for one of the wind band concerts at the 2019 Midwest Clinic should offer some idea of the vastness of this event.