Dear Reader, indulge me, if you will, in a little experiment. I’d like for you to please imagine a genius, someone named “Smarty.” Picture Smarty on an average day. What does Smarty look like? In what field does Smarty work? In what era does Smarty live? 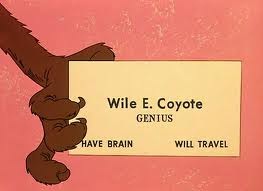 Chances are that your genius was someone removed from your quotidian experience. If you’re a composer, you probably imagined a scientist from the early 20th century. If you’re a scientist you likely pictured a musician from the 19th century or earlier. Chances are fairly good that you imagined a white male with disheveled hair, unless, of course, your mental image of genius derives from the Road Runner cartoons in which Wile E. Coyote had business cards printed identifying his occupation solely as “Genius.”

If you Google the phrase “contemporary composer genius” your results will include pages devoted to Benjamin Britten, César Cui (?!), John Cage, Bach, Mozart, and other dead composers, with Philip Glass holding down the fort as the only living representative one finds among those determined by Google’s algorithm to be the most relevant. Obviously, this idea of the dead white composer-genius is outdated, at best. Yet it remains pervasive and, as this notion is applied to contemporary music, it remains problematic and unhelpful. I would like to propose shelving the very idea of the genius composer.

When 19th-century composers looked to Beethoven as the embodiment of the musical ideal, they were arguing for the contemporary currency of his rapidly aging compositions. They felt that Beethoven’s music deserved a continuing place in the repertoire, a newly developing notion, since concerts had previously been filled with the newest possible sounds. Their refusal to let the music of Beethoven fade into obscurity—and their revival of earlier composers—led to the development of the concept of a standard repertoire, focused on music of the past instead of the present. This 19th-century vision of the orchestral repertoire remains in place as we move well into the 21st century, and Beethoven’s visage has ossified as the Platonic ideal of the composer-genius.

We love the idea of the genius, of the Promethean figure descended from on high to bring knowledge to humanity. This Übermensch stands apart from the masses, pulling them forcibly into a future that they can neither understand nor appreciate. We embrace this notion because on the one hand it allows us to imagine ourselves as being among the limited numbers of initiates who can be trusted with the arcana, while on the other hand simultaneously absolving us of our responsibility in the matter—it’s not our fault that we can’t follow the meaning behind the music because we can’t all be geniuses.

When we can’t understand the basic elements of the discussion, we also can’t discern the distinction between the sublime revolutionaries and the ridiculous charlatans. In this sense, the label of “genius” can function as a way to dismiss art that we don’t understand. We’re saying that we cannot be expected to comprehend the art that makes us uncomfortable or that stretches beyond our immediate ability to analyze its constituent elements. And if we have no way to enter into a dialogue with these creations, then we cannot be held responsible for the relative value of the work. Therefore when I describe an artist as a genius, I’m telling you that I don’t understand the art and that I believe you won’t either.

This link between the idea of genius and our inability to comprehend the genesis of their creations is why our initial vision of the personification of the genius was someone removed from our daily existence. When you’re a scientist, you understand the work that goes into designing and then carrying out experiments. You have an intuitive sense of the road that one needs to travel to gain the sorts of skills necessary in order to be responsible for a leap in our understanding of the world around us. Similarly, when you’re a composer, you know how much training you’ve undertaken in order to master the ability to conceive of new sounds. When a new theorem or treatment of harmony arises, those working within the field have the tools necessary to assess the resulting work. Of course, even these experts will disagree as to the relative value of these new concepts, but they also will have a basis for considering them as coming from our human understanding instead of springing fully formed from the brain of a god. 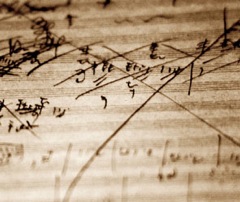 This past week, I’ve been listening to some old favorites by Mozart and Beethoven and also looking at the composers’ own sketches whenever possible. Sketches in a composer’s hand are always revealing, and it’s difficult to give either composer’s sketches a cursory glance without being struck by how deeply each composer’s sketching habits express their own musical personalities. Beethoven’s sketches are full of inserts, cross-outs, and rewrites, and usually scribed with a thick, almost gouging pen stroke that reeks of creative effort; Mozart’s manuscripts (which are so complete they can rarely be called “sketches”) were penned quickly, almost breezily, with comparatively few changes other than filling in more supporting voices.

When I compare these two approaches, it’s difficult not to arrive at the impression that Mozart was recording something already (or mostly) formed in his inner ear, while for Beethoven composing was an often laborious process of figuring something out.

The Mozartean process of recording or transmitting idea (and of being open to the dictates of the subconscious) certainly has its advantages—especially if the composer is working within a received stylistic tradition (as Mozart, for all his wonderful wit and inventiveness, largely was). For those who seek to express themselves by pushing the boundaries of tradition, or who aim to discover uncharted territory far removed from tradition, it is often necessary to sketch and rework, as a more vigorously active participant. Most composers, I suspect, combine these different attitudes in all kinds of t ways, although just as Mozart and Beethoven we all have our predilections.

In today’s composing world, I hear an echo of the Mozartean attitude– though often without Mozart’s characteristic humor and child-like naturalness—in the ways that we tend to teach music composition. Despite the healthy stylistic openness that I’ve been happy to discover in today’s institutions of higher learning, the way that one is “supposed to” compose usually revolves around some variation of: “Figure out what you want to do first, then do it”, which indicates a profound separation between the conception of a work and its realization—composing as recording the results of already-worked-out parameters. This way of composing is often explicitly extolled (along the lines of “you have to know what you’re doing first before you can do it!”), and implicitly privileged in countless preconcert talks, college symposia, and lessons, in which the composer of the moment explains his or her intentions, following which the composition in question is judged on how well it “succeeded” at realizing these intentions.

This can be a useful approach, and I have no problem with it per se. But by over-emphasizing a way of composing that privileges faithful representation of mental constructs, I wonder if we’re failing to point out that composing can also be a process of discovery, experimentation, and play unrelated to prior planning (and resistant to critiques that rely on intention). While composing can be a way to transmit something that we already hold as essential, it can also be a process by which we come to understand our own thoughts and feelings.