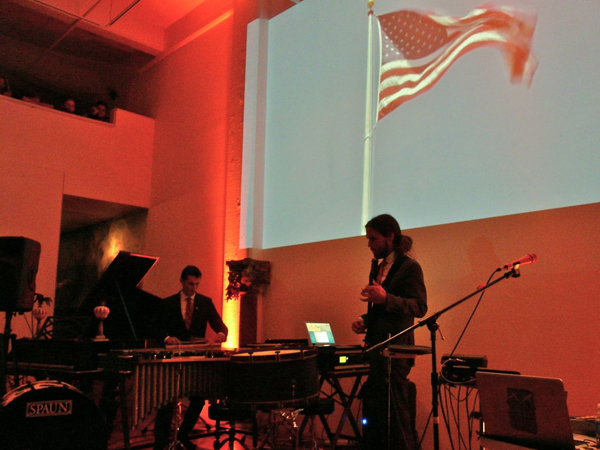 Sarah stipulated that the music should be about war or peace, “but preferably peace.” War seemed easy. Almost everything I had done in the last few years had to do with it. Peace was harder. I started War Dances, but soon got into trouble and couldn’t go on. So I dropped war and turned to peace. 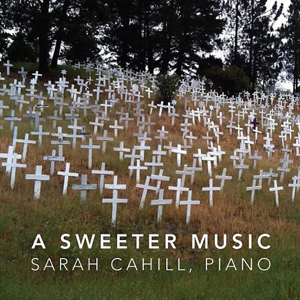 Pianist Sarah Cahill’s A Sweeter Music commissioning project, which has yielded 18 solo piano works that she has presented in concert both in the San Francisco Bay Area and on tour, developed as a response to the Iraq War. Cahill said in an interview with San Francisco blogger Michael Strickland, “After reading news about the latest deaths in Iraq, I would sit down and play [Frederic Rzewski’s arrangement of ‘Down by the Riverside’] as a kind of catharsis. I kept thinking that there needed to be more pieces like this, which are composed in response to a particular war … but can still provide solace and inspiration thirty years later and beyond. … So I really left it to the composers whether their work would be ‘anti-war’ or ‘pro-peace.’”
This fall, the Other Minds record label released Cahill’s recording of eight of the works that have come out of the project. (A second album is planned for future release.) This first CD, titled A Sweeter Music, comprises works by established American compositional voices, including Terry Riley, Yoko Ono, Kyle Gann, Meredith Monk, Phil Kline, Carl Stone, and, of course, Rzewski. There is also a piece written by the legendary experimental art collective The Residents, for solo piano and a recorded spoken text. Many of these composers have created works in response to war previously—Riley’s Salome Dances for Peace, Kline’s Zippo Songs, and much of Rzewski’s output immediately jump to mind—but Cahill’s juxtaposition of these diverse artistic reactions to mankind’s most destructive compulsion makes for a multifaceted and complex collective statement.


Only two of these works include text: whereas The Residents’ drum no fife uses a recorded text that addresses the universality of the desire for both war and piece, in War is Just a Racket Kyle Gann instead gives Cahill herself text to recite while playing, drawn specifically from a 1933 speech by U.S. General Smedley Butler denouncing the military and capitalism. Gann aligns certain chords and cadences with specific words and lines, with solo piano interludes that are pastiches of Americana, evoking a distorted Norman Rockwell image of apple pie. Within this compilation, Gann’s work is the most explicit in its condemnation of war and the motivations that have driven America into violent conflicts.

But Cahill’s title comes from Martin Luther King’s statement upon being honored with the Nobel Peace Prize in 1964—“We must see that peace represents a sweeter music, a cosmic melody that is far superior to the discords of war”—and several of the other composers chose to explore the topic from the pro-peace perspective. Yoko Ono’s Toning takes a conceptual approach, asking the performer to use the playing of a series of ascending major triads as the opportunity for a personal meditation, with each chord ringing like a Tibetan bowl, a looking inward to heal internally before looking back out to the world. Similarly, Riley takes personal compassion as his starting point, using a lullaby played for his grandchildren as a basis for his Be Kind to One Another (Rag), which takes its title from an exhortation by Alice Walker in the wake of 9/11.


As Rzewski notes, in some ways peace can be more challenging than war, but Cahill performs his demanding seven-movement Peace Dances with commanding and assured grace. Utilizing fragments of a number of traditional tunes, Rzewski wrote a series of short and varied works that acknowledge peace as a complex idea. While the ravishing sixth movement features a fluid stream of pentatonic runs with a bright melody ringing out above, by contrast the fourth takes elements of “Die Moosoldaten,” a song by Nazi labor camp prisoners, and builds an ominous canon. The optimistic final movement, “It Can Be Done!,” written both as a 100th birthday gift for Elliott Carter and as a tribute to Pete Seeger, features an ascending pointillistic line, glissing down repeatedly but climbing again. The piece ends with the left and right hands in quiet, settled dissonance.
*
A San Francisco-based percussion/electric guitar duo called The Living Earth Show unveiled their new album High Art last month with a performance on the Artist Sessions concert series, recently founded by pianist Lara Downes. Released on Innova Records, High Art is a collection of five pieces that The Living Earth Show has been performing regularly, written for them by a younger generation of composers than those represented on Cahill’s disc: Samuel Carl Adams, Timo Andres, Adrian Knight, and Jon Russell. To celebrate the release, they projected a film for Knight’s Family Man, created by Will Greene, and posted it as a music video on YouTube. 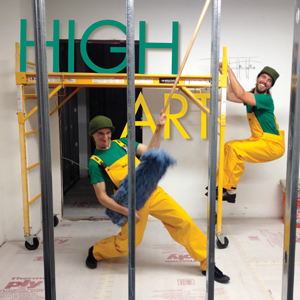 The tongue-in-cheek juxtaposition of the title High Art with the charmingly sophomoric album cover photo belies the deeply committed, totally focused playing of guitarist Travis Andrews and percussionist Andy Meyerson. In live performances, the musical communication between Meyerson and Andrews is at times astonishing and has the feeling of being completely natural. At the release event they played three of the works from the album on this concert, from memory. The CD listener is unfortunately denied the pleasure of witnessing the amount of multi-tasking required of Andrews and Meyerson to realize this collection of layered and multi-textured pieces. (Memorization seemed almost a necessity since often no limbs were left available for page turning.)

The album is framed by two works by Adams titled Tension Studies 1 and 2 from 2011, which were among the first works written for The Living Earth Show. Adams’ spacious writing for the duo plus electronics turns the listener’s focus in to the overtones from the guitar or crotales, notes that bend from the guitar and bowed vibraphone, pairs of pitches that are tuned slightly differently, or moments of stillness and resonance with unpredictable durations.

The longest work in the collection is Knight’s Family Man, an episodic work that, taken as a whole, paints a curious American landscape filled with nostalgia and decay, violence and melancholic solitude. The brief movements or snapshots are separated by live-triggered samples of the sound of a slide projector and languorous big band dance music, and as the interludes cut off abruptly the listener is deposited into another place in the expanse.