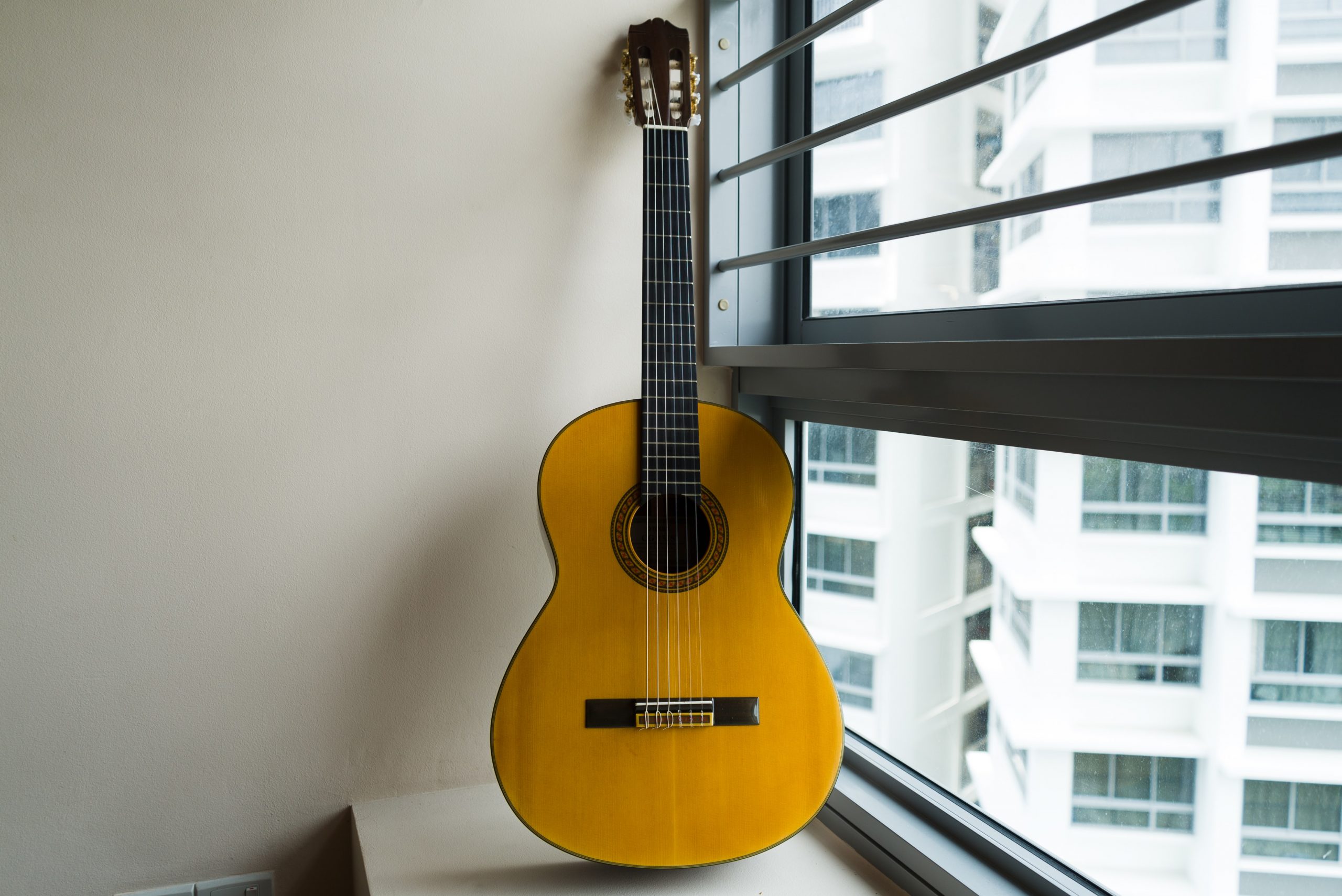 “I guess no music schools will accept the repertoire that I’m playing for my graduation recital, right?” My student paused, and then gazed back into his webcam. “I can take a year off, I guess.” His voice, heavy with frustration and disappointment, trailed off.

“Yeah,” I replied, not really thinking about it. “Most schools require Bach and Sor, at least. You might have to take a year off to learn that repertoire—”

I stopped, suddenly considering my own reaction to my student’s question. We both sat silently for a moment, considering the personal, artistic, and financial implications of a gap year. We both knew this wasn’t a feasible option. Even over Zoom, his posture seemed to collapse under the weight of this potential setback. No—this couldn’t be the answer.

My student, Matthew Briehl, is currently working on repertoire for his graduation recital at Arizona State University, where I’m an assistant professor. He’s committed to learning and highlighting the music of Black composers, and—with my enthusiastic approval—he has made the decision to only program works by composers of color on his graduation recital. His dedication demonstrates a level of initiative that few students possess. As an educator, this is something that I seek to encourage and cultivate within my studio. Yet, by encouraging my students to seek out works by underrepresented composers—an initiative that most music schools would seem to support, at least based on their recent statements—I’ve inadvertently disadvantaged those who aspire to apply for graduate study, festivals, competitions, and other opportunities.

By encouraging my students to seek out works by underrepresented composers, I’ve inadvertently disadvantaged them.

In response to recent tragedies and the subsequent protests and public outcries, most major conservatories have made statements that condemn systemic racism and affirm allyship with individuals identifying as Black, indigenous, or people of color (BIPOC). These institutions have publicly declared intentions to create “a welcoming home for African American colleagues [and] all people of color” (Yale School of Music); to “tear down systemic racism and injustice” (The Juilliard School); to “embrace diversity, inclusion and equity” (Cleveland Institute of Music); and to “forge a new path of systemic inclusion” (San Francisco Conservatory of Music). There are many more I could include—I’m sure you’ve encountered similar language in statements issued by other leading performing arts organizations.

To be clear: These are admirable, worthy goals, and I’ve chosen these schools as examples because of their prominence. Many institutions have already detailed specific actions that will lead to measurable changes in both culture and curricula. But, in exploring these lists, I have yet to see any mention of audition repertoire. Institutional change is necessary, yes; but, if admissions requirements already exclude BIPOC, then institutional changes will remain surface-level and will do little to improve diversity and representation within our industry.

For auditioning classical guitarists, most music schools require: a piece by Bach; a major piece from the classical or romantic era; a 20th century work; and, occasionally, a contemporary piece. Among the programs I know of there isn’t one audition repertoire list that places emphasis on music by BIPOC and/or female composers. It is important to recognize that these lists often determine the repertoire that students select to learn during their most artistically formative years. Why take on additional repertoire that won’t contribute to educational and/or professional advancement?

I’ve been guilty of perpetuating this problem, too. I acknowledge that I have been complicit in this area of systemic exclusion, and I intend to create meaningful change within my own program. Previously, I have based my audition requirements on those of other US-based guitar programs without giving sufficient thought to the kind of program I seek to cultivate and the values I intend to uphold. But, my student’s recent comment forced me to recall my own days of learning and perfecting repertoire that I didn’t really relate to. As a Korean woman, it was exceedingly rare that my prepared audition repertoire could include music written by anyone I could identify with. As a performer, I’ve upheld a commitment to performing music by diverse composers. Further, I commission new works in an effort to expand the classical guitar’s contemporary repertoire so that it better reflects our current time and audience. As an educator, I strive to promote these values, and I intend to do better. 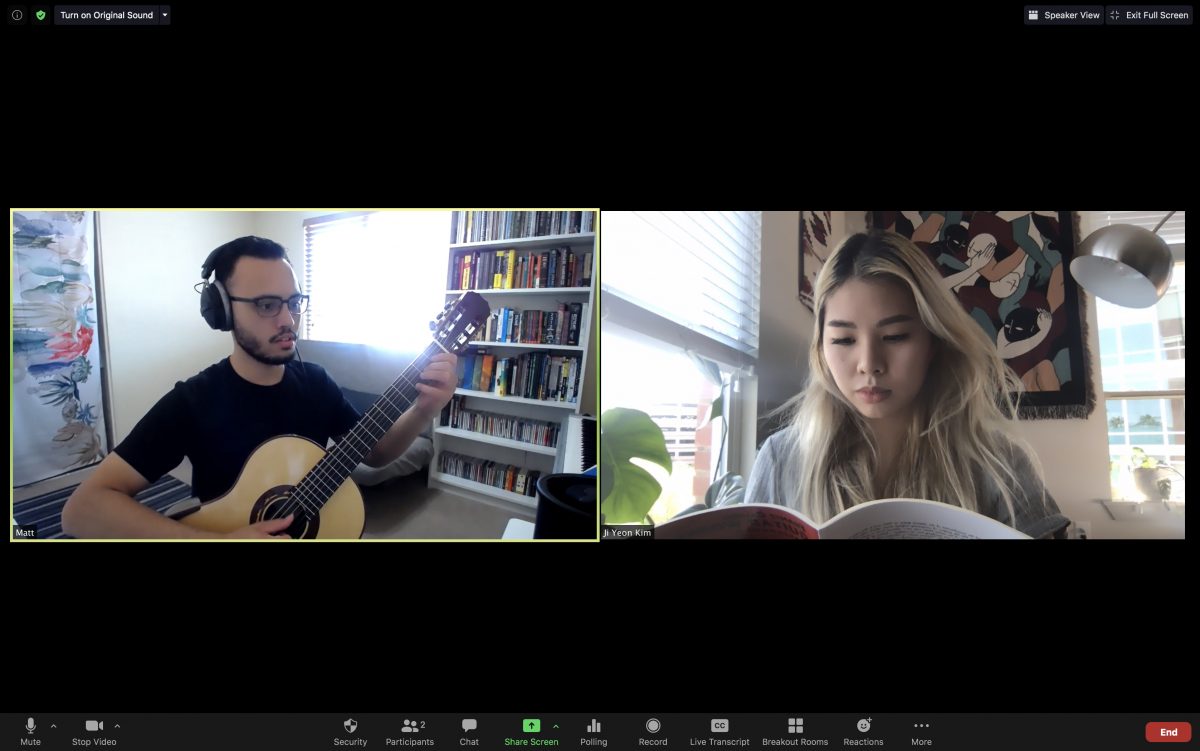 One of Matthew Briehl’s guitar lessons with Jiji Kim over Zoom.

I’m proud of my students who seek out repertoire composed by BIPOC and women composers, and I’m grateful to my student who compelled me to confront a significant blind spot. I’m committed to making a change, and I want to show him that his voice and experience matter. We can—and must—become more inclusive.

You might argue: “Cool idea, but isn’t it a CLASSICAL guitar program?” Yes, it is a classical guitar program; however, in this context, the descriptor “classical” describes an instrument and specific style of playing. What does CLASSICAL really mean? And, why is our definition so exclusive?

What does CLASSICAL really mean? And, why is our definition so exclusive?

I often perform pieces that require live processing using Max/MSP and Ableton. Many wouldn’t define these works as strictly classical; however, these pieces make significant demands on the artistry and technique that I’ve only obtained through “classical” training. I teach my students the artistic and educational value of investing in contemporary works that represent the time in which we live, particularly works that incorporate technology. I also encourage my students to commission new works and engage in mindful programming—sometimes, you might have to exert a little more effort, but I assure you, BIPOC composers have contributed incredible, worthwhile works to the classical guitar repertoire. They’re there if you look for them.

Further, it’s important to recognize that classical works in the traditional canon often do not represent the background or experience of a student, particularly those who identify as BIPOC. This isn’t to say that the canon doesn’t hold educational or artistic value—I continue to teach these works, and I do not seek to condemn their validity or diminish their significance. Rather, I argue that we can and should expand opportunities for our students to engage with works that hold personal significance. We need to recognize that exclusive audition repertoire lists and recital requirements severely limit these opportunities.

How can I make requirements a better reflection of our current time?

Our industry and institutions have so much to gain if we truly open ourselves to the diverse voices that exist—and have existed for centuries!—within classical music. So, I challenge my colleagues across the country to examine their required repertoire lists for both auditions and graduation recitals. Ask yourselves—who do these lists exclude? Who do these lists benefit or advantage? How can I make these requirements a better reflection of our current time? How can these lists further institutional and/or industry goals for diversity, equity, and inclusion?

I pledge to make the following changes to my own audition requirements at Arizona State University:

Here are some examples of current audition requirements at major music schools within the United States:

I would like to mention that Manhattan School of Music includes a female composer Joan Tower and a Japanese composer Toru Takemitsu as examples of pieces to play for the auditions. 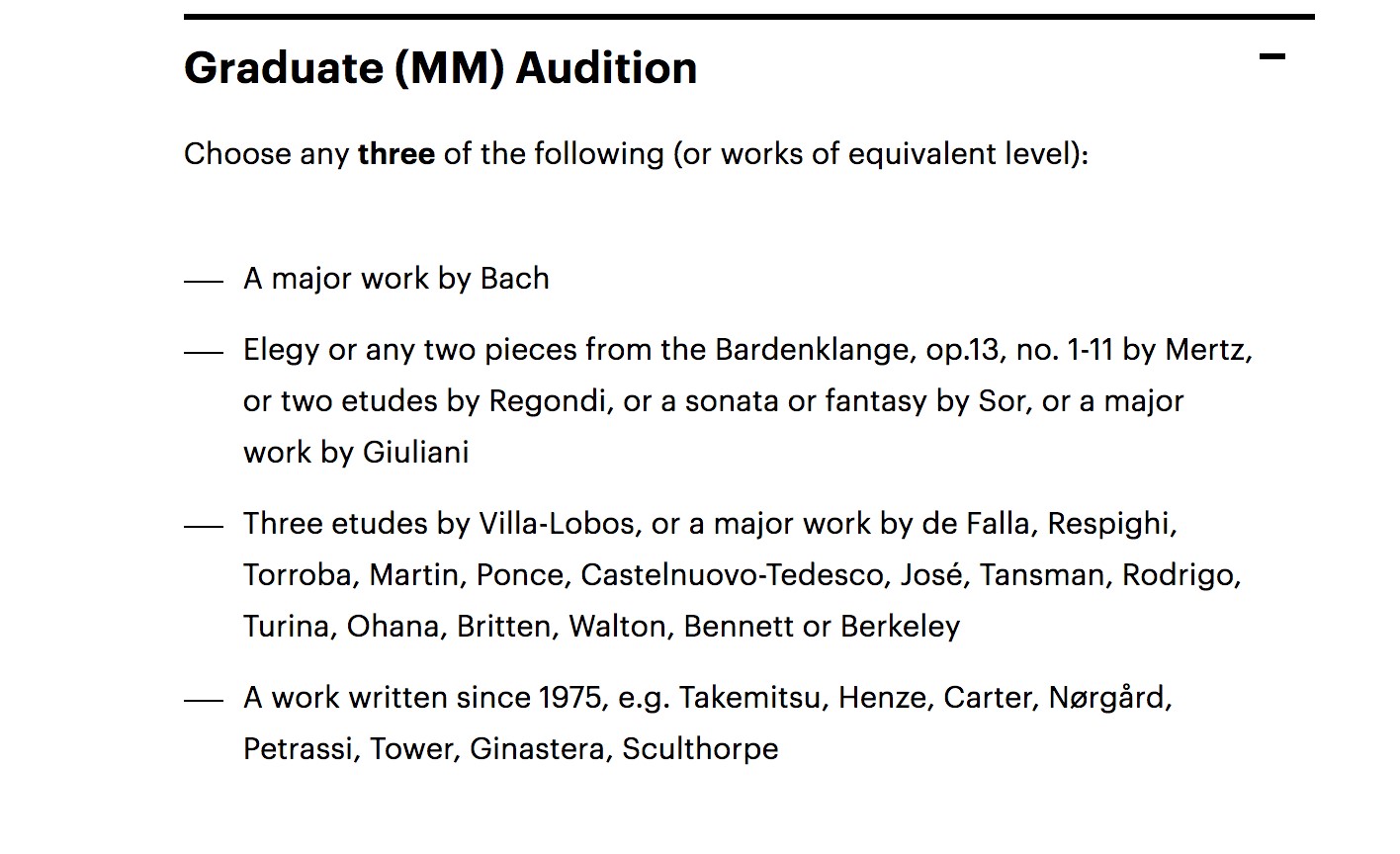 If you have no idea where to look or even begin, please refer to the resources included at the end of this article. Amazing people have dedicated a lot of time and effort to simplifying the process of identifying composers of color. In the paragraphs below, I’ve highlighted three BIPOC composers.

Amazing people have dedicated a lot of time and effort to simplifying the process of identifying composers of color.

Justin Holland (1819-1887) was an African American classical guitarist, composer, and arranger from the 19th century. Justin Holland’s classic method book is perfect for beginners. Referring to methods of Sor and Aguado, he says “They are poorly adapted to the use of beginners. All of the great Masters (Sor, Aguado, Giuliani) … Some omit elementary explanations, some harmonics, others have no mention of the great number of musical embellishments constantly occurring music…” Which I totally agree with. These Sor and Aguado books lack many important rudimentary explanations––so, if you don’t have a skilled teacher, these very popular method books can be a disaster for young guitarists. The first 15 pages of Holland’s method book carefully explain what it takes to play the instrument (fret visual mapping, posture, etc.) and to learn music (music theory, how to count time, etc). His original work Andante demonstrates his immense talent, and you can also see that he was a skilled arranger (Prof. Ernie is an amazing artist).

Francis Bebey (1929-2001) was a Cameroonian composer, guitarist, and writer. His works are very impressive—I especially love his composition Black tears. There is a lot happening in this piece––chromatic harmonies and African rhythms—and the emotions keep shifting to such different places, high then low, it’s dissonant for a moment and then it’s not—we are jolly for a moment—ah—not anymore. It’s an emotional rollercoaster of a piece, and it requires a tremendous level of musicianship to execute well. “Black African Music is not meant just for the ear but for all the senses and faculties of the body. It reflects Africa’s vision of the world on earth and the world beyond, a world of change and movement, a world in permanent search of betterment and perfection.” (Bebey 1974) I’ve listened to this piece over and over again, and I’m in love with it. 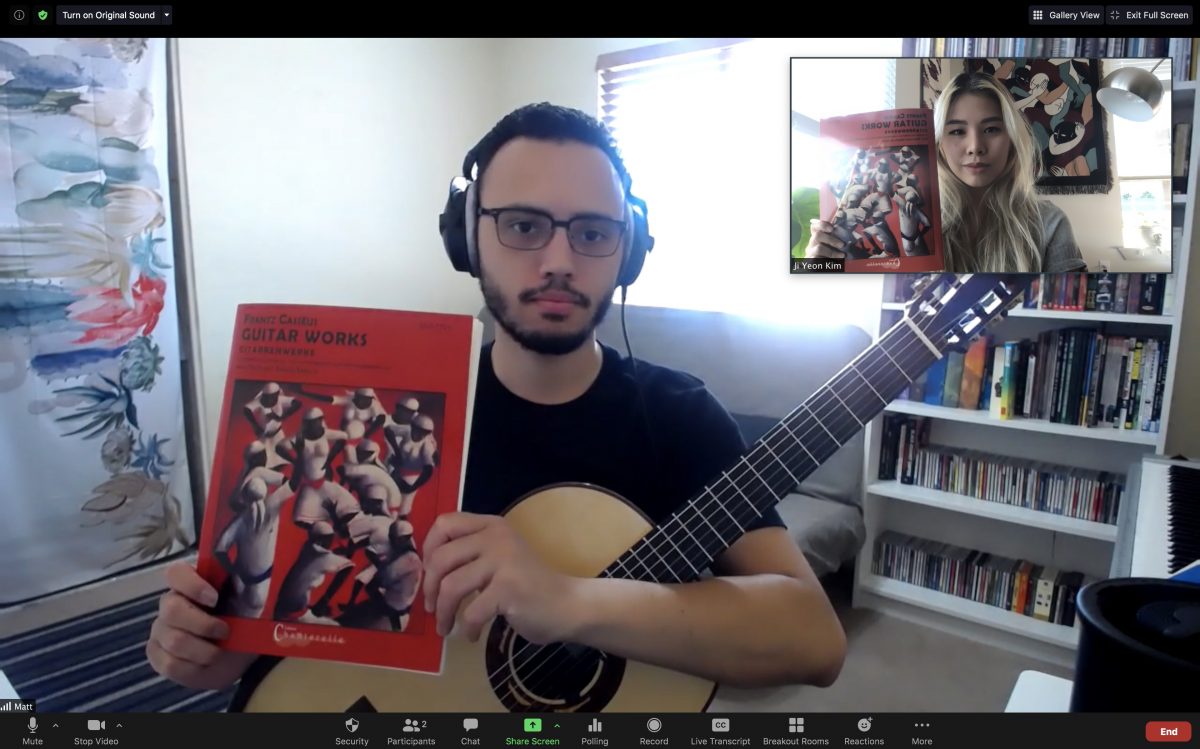 Frantz Casseus (1915–1993) was a Haitian-born composer, guitarist, and arranger who emigrated to the United States in 1946. He was also the teacher of Marc Ribot (who is one of my favorite guitarists and who wrote a great article about Casseus). He had an active performing career which sadly came to a halt in the ‘70s due to tendonitis in his left hand. His composition Haitian Dances from the mid-20th century incorporates classical writing combined with Haitian folk songs and jazz. It’s one-of-a-kind and absolutely gorgeous, and I’d love to see this piece valued as a 20th century major work. This quote from Ribot sums up the perpetual problem Casseus faced during his career: “… [He] lived as a black man in a United States whose southern racists wouldn’t let him stay in the hotels where he performed and whose northern liberals had difficulty accepting his work as classical, preferring to hear it within a “folk” context when they heard it at all.” (Ribot 2003). Let’s not be those “northern liberals”—it’s fantastic, worthwhile music.

As educators, we have the responsibility to engage in difficult dialogues.

As educators, we have the responsibility to engage in difficult dialogues; beyond this, we need to adapt and move forward as society makes progress. We can’t just shout the buzzwords “diversity, inclusion, and equality!” and then not take initiative when we have opportunities to do so. We cannot continue to dismiss diverse voices because they don’t adhere neatly to our “classical” definitions. I’m planning to do better. Are you with me?

I’d like to thank Liz Lerman and Deanna Swodoba for inviting me to ASU’s transformation group and for helping me to recognize systemic abuse. A million thanks to my student Matthew Briehl who has inspired me to make changes. And another million thanks to my dearest friend Hilary Purrington who has generously helped with this article.