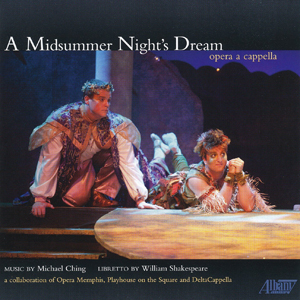 Two excerpts from Act One, Scene Two of Michael Ching’s opera A Midsummer Night’s Dream
© 2014 Michael Ching and ℗ 2014 DeltaCapella /Albany Records. Tracks streamed with permission.
“New music,” the term we use as an umbrella for the music we feature on NewMusicBox, is simultaneously a blessing and a curse for the exact same reason—the words in and of themselves don’t really mean anything terribly specific. Music at this point can mean almost anything and the definition of new is also rather malleable; what is considered to be of recent vintage sometimes encompasses material that is more than a hundred years old despite such music not seeming chronologically new. However, many of us seem to parse the new music from the old based on whether or not it’s somehow avant-garde, doing something that no one has ever done before. In our web-search saturated post-post-post-modern era (I might have missed a “post” or two—it’s difficult to keep track), claiming something has never been done before is a recipe for almost instant refutation. A common conception these days is that nothing is “new,” which of course makes a definition of new music where new implies avant-garde even more perilous.

For an artwork to be truly avant-garde—whether it’s a piece of visual art, literature, or music—there needs to be an element of cognitive dissonance upon first encountering it. That’s what the initial audience reaction was to Picasso’s Les Demoiselles d’Avignon, Duchamps’s Fountain, Gertrude Stein’s Tender Buttons, and Stravinsky/Nijinsky ballet The Rite of Spring. But of course all of these works have been with us for a century and have become part of our cultural heritage, so they’ve pretty much lost most of their shock value. In more recent times, high art’s embrace of banality—from Andy Warhol’s iconic Campbell’s soup cans and Yoko Ono’s Painting to be Stepped On to Jeff Koons’s glorification of kitsch—began as an aesthetic provocation but is also no longer particularly disquieting. Even Koons’s output, now the subject of a major retrospective at the Whitney, has entered the mainstream.

Yet despite how difficult it is to be startled by something at this point, that was precisely my reaction to the just-released recording of Michael Ching’s 2011 opera, A Midsummer Night’s Dream. But it’s not startling because its libretto is extreme or confrontational or because the music is in some esoteric stylistic idiom that has rarely been mined in a stage work. After all, the libretto is directly taken from one of the most famous plays by William Shakespeare (not a word has been altered) and the music is resolutely tonal, frequently extremely tuneful, and sometimes borders on pop.

Perhaps the most radical aspect of Midsummer is that there is no orchestra in the conventional sense. Rather every sound made to accompany what the cast sings is made by a 20-member chorus of voices—a “Voicestra.” But that too is nothing new. Aficionados of choral music or doo-wop know that a complete and completely satisfying sound world does not require anything beyond the human voice and fans of Sarah Vaughan might even remember her 1948 hit “Nature Boy,” a clever track made during the musicians’ union’s ban on recordings, in which the singer was accompanied exclusively by other singers imitating instruments. (Singers were not affected by the ban!) In more recent times, Bobby McFerrin has even used the word Voicestra to describe a group he leads made up of twelve singers from a variety of stylistic backgrounds who perform without instrumental accompaniment.

However, perhaps it’s a completely radical new idea to create an entire opera that only consists of singing. Certainly musical instruments have been a key ingredient in opera since the Florentine Camerata established the genre as we know it today at the end of the 16th century. But, although Jacopo Peri and his cohorts claimed their efforts at dramma per musica were an attempt at reviving ancient Greek theatre, they were deeply indebted to a more contemporaneous phenomenon called madrigal comedy which told stories by linking together a series of madrigals sung by a group of singers, sometimes with instruments doubling their parts, but sometimes completely unaccompanied. So opera actually has its source in unaccompanied vocal music. And, in fact, Michael Ching’s A Midsummer Night’s Dream isn’t the only recent opera scored exclusively for voices. Lera Auerbach’s The Blind, which was performed last summer as part of the Lincoln Center Festival, is also completely instrument free.

But whereas for Auerbach the absence of instruments served as an extremely apt sonic metaphor for deprivation (additionally, in John La Bouchardière’s production of her opera, the audience was blindfolded!), for Ching being restricted to just voices seems hardly a constraint. Abandoning instruments has paradoxically allowed him to create an operatic narrative that at times is every bit as opulent as conventionally scored works, and the absence of a large group of people in a pit (and the even larger paraphernalia which they need in order to make sound) gives the opera a lightness and a freshness that makes it instantly appealing and extremely practical as well. Ching, who served as the artistic director of Opera Memphis for nearly two decades before relocating to Iowa in 2010, certainly understands the practicalities of mounting an opera better than most composers. So this recording of the premiere production mounted by Opera Memphis in collaboration with Playhouse on the Square, featuring the combined voices of local groups DeltaCappella and Riva plus an exemplary cast who all sound totally comfortable navigating between operatic, Broadway, and even R&B idioms, will hopefully be the first of many.

As for why it startled me, it was simply totally unexpected. It sounds nothing like what I imagine an opera based on Shakespeare would sound like. And yet it totally works. And again, it’s not without precedent; a Joseph Papp produced radical pop update of Two Gentlemen of Verona featuring a musical score by Hair composer Galt MacDermot fetched the Tony Award for Best Musical back in 1972. Ultimately whether something is “new” in the avant-garde sense is not really important anymore; Ching’s score is compelling from start to finish and rewards with repeated listenings as well. And, perhaps the biggest shock of all to some denizens of “new music,” it’s lots of fun!