What strikes me about my SXSW experiences in the twelve years I’ve been here (and what I typically hear from friends and acquaintances) is that some of the best parts were not vaguely planned. What they stumbled upon as they made their way around downtown Austin and the surrounding area is what made their festival experience fun and unique.

You can feel SXSW approaching about two weeks before Austin’s population doubles and everybody and their grandmother has a keg and a band in the backyard. The locals can be divided into two categories: those who have made travel plans, and those who haven’t and are preparing like the Mayans got it right. For those in the latter group, supplies are purchased and thoughtful itineraries are carefully outlined. Friends are flown in, stationed on couches, given keys, and told where to get breakfast tacos; specifically where to get them at 3 a.m. Bars, venues, coffee shops, food trucks, transportation, wristbands, multi-level passes, and wardrobe (always tricky with the sketchy weather) are all prepped.

And then you end up doing a fraction of what you had planned, you lose your phone, your wristband turns out to be fake (happened to a friend, tragic) and the highlight of your Thursday was the time you spent east of I-35 watching a band from Iceland play chip tune music on rewired Game Boys….

And it’s still a blast.

What strikes me about my SXSW experiences in the twelve years I’ve been here (and what I typically hear from friends and acquaintances) is that some of the best parts were not vaguely planned. What they stumbled upon as they made their way around downtown Austin and the surrounding area is what made their festival experience fun and unique. I, too, have stumbled around downtown Austin (SXSW notwithstanding), and this year found a few shows that I’d planned to see, and a few that just showed up. 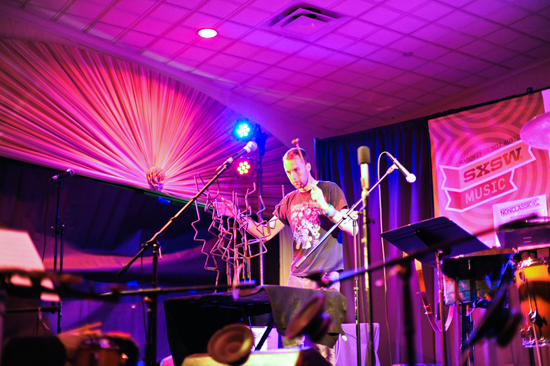 SXSW 2012 was a cloudy, overcast affair. The festival that starts and ends with music is nonetheless dominated by its technology-focused interactive festival which takes place at the start of SXSW and is indoors by and large; a situation that played out well this year. “Yeast By Sweet Beast“ (my stumble-in) is a three-day experimental improvisation and “outsider music” festival founded in 2000 by poet, musician, and film maker Anne Heller. Inspired by Andy Warhol’s “Exploding Plastic Inevitable” happenings, these showcases of sound artists were accompanied by installations by video artists Paul Baker, Katie Rose Pipkin, and Laurel Barickman, creating a thoroughly hypnotic vibe.  Held at a number of venues including Skinny’s Ballroom, Trophy’s, and Headhunters, the festival featured a tremendous variety of artists and styles. Highlights included the scattered vocal improvs of Bosco Stravinsky, Futureblondes, the “pop with big beats” of Ichi Ni San Shi, the rhythmic noise trance of Daze of Heaven, and Austin favorites Matt Burnett and Rebecca Ramirez.

The “They Used to Call it Classical” panel was held at the Austin Convention Center and featured Ed Ward, Justin Kantor, Alex Ross, Janet Cowperthwaite, and Carl Stone discussing the classical crossover trend that got its start decades ago but has since become the “It Girl” of new music discussion. The modest crowd heard a number of stories and insights, including Kantor’s take on keeping the doors open on a venue that features different styles nightly, Cowperthwaite’s discussion of the Kronos Quartet’s long-term commissioning project, and Alex Ross’s historical perspective on crossover. This should be required listening, and I hope that there is a repeat/update for next year. 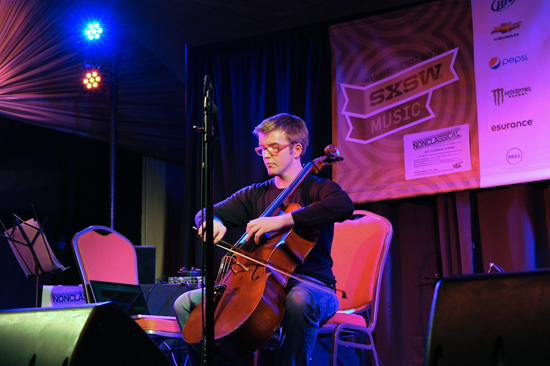 Nonclassical and Fast Forward Austin curated a showcase downtown on the last weekend of the festival. Steve Snowden’s live remixes of music from the Nonclassical catalogue providing a great beginning to the show while offering a buffer for those filtering in a little late. Solo bass performances by P Kellach Waddle of his own compositions were followed by the Bel Coure sax quartet which performed music by Rob Honstein, Jennifer Higdon, and Nick Sibicky, resulting in an enthusiastic standing ovation. Cellist Peter Gregson brought a minimalist vibe to the room with pieces by Reich, and Nonclassical’s Gabriel Prokofiev and percussionist Owen Weaver performed a “sculpture piece” providing one of the more captivating visual performances of the evening. The Aiana String Quartet gave stellar performances of music by Piazzolla, Gabriel Prokofiev, and Bartok’s First String Quartet, the last of which was clearly the “classical” music of the night. Finally, Line Upon Line closed the show with pieces by Snowden, Ethan Greene, and a killer performance of Xenakis’ Okho. Well aware of the time limit imposed on the show (they run a tight ship at the Hilton, folks) LUL performed ninja-like set changes between pieces, a bit of ballet all by itself.

The Innova Records showcase the following night was held in the same “is this really a conference room?” venue as the FFA/NC show the previous evening.  Kicking off the showcase was Prester John  sounding every bit like the Presidents of the United States of America, if they were locked in a room for several years with a metronome, a monster work ethic, and a penchant for scales. I can only imagine that the phrase “quirky pop” is used from time to time in describing these guys, but it doesn’t do them justice. From fun tunes like “Fireman’s Drive Inn,” to the Zappa “Black Page“-esque (at least the intro) of “The Library Thief (with The Half Speed Cakewalk),” Prester John managed to maintain a sense of humor while displaying impressive chops. Sxip Shirey came on stage guns blazing, bearing train whistles, harmonica, prepared guitar, and an effects set up that sounded at times like trains in the distance (his description) and at others like the solo from “Owner of a Lonely Heart“ (my take, which I think is very cool btw…check 2:35). The Golden Hornet Project dusted off their Prokofiev (Sergei this time) arrangements (among the first pieces the group worked on when they formed) and dropped them, early Mr. Bungle-style, on the crowd. Their hyperkinetic mini big-band stylings, complete with pounding piano and killer horns, would have fit seamlessly into nearly any venue in town.

During the set change, Hall and Oates’ “Rich Girl” was playing over the P.A. and man, there was a lot of whistling and humming going on in that room. Just sayin’….

Todd Reynolds’s set was, for me, the highlight of an evening full of great performers and composers. His performance of Michael Lowenstern’s Crossroads was absolutely thrilling and had the audience positively grooving. Val-Inc’s Afro-electronica set included field recordings mixed with beats and a theremin-like control interface which made for a compelling show both visually and aurally. Finally Grant Cutler along with Innova’s own Chris Campbell laid a bit of an ambient mix on the audience, a fitting come-down to a very stimulating evening.

Now that the town has released its seasonal population to the four winds, I can take a moment to reflect on another South By Gone By. Bookended by the weird and freaky YBSB at the front and the somewhat more formal but nonetheless funky showcases at the end, this year’s festival had a lot to offer those who are looking for something other than the usual fare. If there is anything that the audiences at these shows have in common with audiences at the traditional SXSW venues, it’s the fact that it’s hard for anyone to get out and see everything they want to see, especially if your tastes are varied. An embarrassment of riches such as SXSW demands that some shows go unseen, and that’s a bummer. However, the shows I made it out to this year were all pretty fantastic, and that gives me hope that (assuming the Mayans blew it) next year will be even better.