In a SXSW season that was largely panned as having jumped the shark commercially and was sadly marred by a horrific tragedy, two Big Apple bookends operating outside of the SXSW machine served to salvage an otherwise lost Spring Break. Jace Clayton (who performs as DJ Rupture) was joined by narrator/singer Arooj Aftab and pianists David Friend and Emily Manzo to perform The Julius Eastman Memorial Dinner, while Brooklyn Rider played the first of two shows of their ten-day residency with Texas Performing Arts. 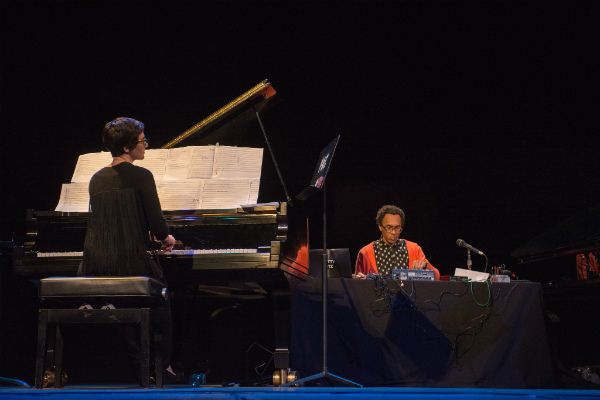 Presented by the University of Texas Visual Arts Center and Church of the Friendly Ghost, The Julius Eastman Memorial Dinner is a long-form work for two grand pianos, live electronics, and voice by Jace Clayton. Based fundamentally on two works by Julius Eastman, Clayton combined his live electronics with the pre-existing material and theatrical vignettes to create the new piece.
Clayton’s electronic set-up in the center of the stage was flanked by the two grand pianos, each placed so that the performer was facing away from the audience. Tremolo on single pitches played a significant role in the piece, and both pianists spent a great deal of the early portion of the work intoning streams of these over what amounted to a d minor key center. Clayton’s electronics would bubble to the surface by and by, sometimes manipulating the material we’d just heard and at others creating new textures. Everyone was amplified, so even his most delicate moments were accessible. Much of this would circle around before coming to rest via a big dramatic riff played by the pianos which lived mostly in the lower end of the range.

Lasting over an hour, the minimalist musical portions of the work were broken up by a few short spoken vignettes, brief interludes drawn from Eastman’s material including one of an interview for a position as an Eastman impersonator. Eastman was most active from the ’60s through the ’80s, and as a gay African-American was largely marginalized during his most creative period. It was interesting to get a glimpse into the world of sexual and racial politics, though at times it was difficult to reconcile the vignettes with the bulk of the music. The two seemed to reconnect more strongly towards the end when Aftab began to intone elements of the interview, singing in a smoky alto over dark minor chords coming from one piano while high pedal points came from the other. A provocative and challenging piece, The Julius Eastman Memorial Dinner provided a compelling perspective of the political, racial, musical, and historical climate of New York in the late 20th century. 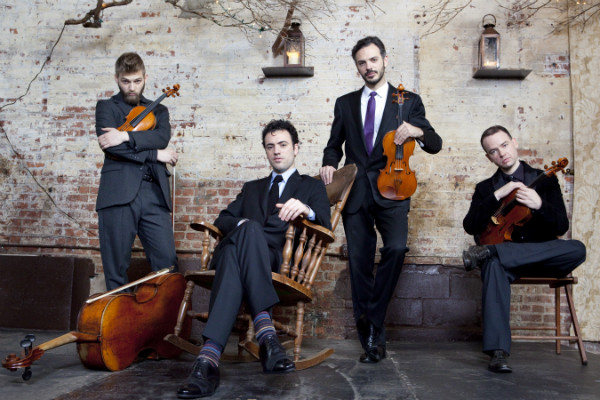 Brooklyn Rider is in town for a ten-day residency with Texas Performing Arts during which they’ll play two concerts and participate in a variety of activities involving the university and the community at large. Their first show had a decidedly eastern bent, starting with Eastern Europe and moving along to the Middle East.

The first half of the show consisted exclusively of the music of Lev “Ljova” Zhurbin, and the quartet kicked it off with Zhurbin’s Budget Bulgar, a short engaging Klezmer tune that was “sketched between playing dance sets at a Russian wedding in western New Jersey.” Full of life and energy, it set the tone for the evening and introduced the audience to Brooklyn Rider’s slightly unconventional configuration (left to right) of violin, cello, viola, and violin with all standing save cellist Eric Jacobsen who was perched on a platform. The standing configuration allows for more movement during performance, and the quartet took full advantage of this freedom by taking the standard physical movement inherent in typical performance practice and ramping it up. It never seemed forced or played for effect mind you, and I expect most players freed from the chair would do the same. Here it certainly helped convey the exuberance of both Zhurbin’s opening piece and the longer Culai which followed. The title of the latter comes from the nickname of Nicolae Neacsu who was violinist and vocalist for the Gypsy group Taraf de Haïdouks and who served as inspiration for the piece. Set in five movements, the work diverged from the Klezmer precedent and moved squarely into the realm of gypsy music, complete with shouts and pizzicato basslines swirling throughout the first movement. Eric’s brother, violinist Colin Jacobsen, conjured a languid melody punctuated by rapid lines which swooped in from above. The highlight of the second movement was during the two long solos which, while compelling in their own right, were almost outshined by a simple accompaniment of chords led by violist Nicholas Cords. Simple, unadorned, and only slightly syncopated, there was a drama in their simplicity and in the need for the players to be perfectly synchronized during this somewhat long section.

The final piece, an arrangement of a Romanian traditional work Music of the Roma, came in like a lion and went out like a lamb, its melancholy end accented when, as the final lines were played, Jacobsen and fellow violinist Johnny Gandelsman turned and walked offstage, followed in short order by Cords, leaving Eric alone for the final moments, a pregnant pause before an eruption of applause.

The second half of the concert began with a superb run of Bartók’s second quartet, the applause from the first half peppering the pauses between movements. Following Bartók is no small feat, especially in an evening dominated by eastern European folk-influenced string music, but Jacobsen (Colin this time) stepped up to the plate with his Three Miniatures for String Quartet. Inspired by a trip to Iran, Three Miniatures is a set of works that aim to embody “the tradition in which the epic stories of love, heroism, and allegories of human folly are played out in tiny portraits of incredible detail.” Jacobsen’s works lived up to the model, each a world (and occasionally worlds) of their own. The outer movements shined in particular. “Majnun’s Moonshine” opened with delicate harmonics following wandering pizzicato lines in the viola. Filigree scales feathered up and down, developing as the group came together in a 7/8 figure, the delicate opening forgotten and traded in for a lumbering exit. “A Walking Fire,” Brooklyn Rider’s debut CD namesake, was full of pulsing, nervous energy. The piece didn’t so much build to a climax as live in one. Ostinati and melodic fragments swirled around chunky double stops, the group rising together and fading back as one or another player came forward with a longer solo, only to rejoin the odd-time fray. It was a thoroughly enjoyable evening as evidenced by the animated post-concert chatter in the lobby, a chatter that will likely be amplified for the second concert when the quartet is joined by Dawn Upshaw for Schoenberg’s second quartet and a new work by Colin Jacobsen.