For ensembles of composer/performers, neither the tight, goal-oriented schedules of summer festivals nor the creative isolation of writers colonies fit. At Avaloch, both Triplepoint Trio and Invisible Anatomy were able to stretch their legs creatively while being inspired by the diverse community around them.

Last week I gave some background on the Avaloch Farm Music Institute and explored how being involved in creative residencies impacts collaborative musical work. During the first week (July 10-18) of 2016’s New Music Initiative, I had the chance to observe how two ensembles of composer/performers craft fluid, group-developed music.

Invisible Anatomy is a New York-based composers collective dedicated to large-scale multi-media shows. Its members—Brendon Randall-Myers, Paul Kerekes, Dan Schlosberg, Ian Gottlieb, Ben Wallace, and Fay Kueen Wang—are also cunning and acerbic performers, the collective’s name is a nod towards the physical bodies of performers and the invisible presence of composers on a concert stage, a celebratory collision of what cellist/composer Ian Gottlieb calls “the immediacy of a composer who also expresses himself with his own instrument.” While the group’s electric/acoustic instrumentation is similar to the Bang on a Can All-Stars, the strength of Invisible Anatomy’s previous multimedia shows (2014’s Body Parts and 2015’s Dissections) is the diversity of their sonic approach, which veers without warning from dynamic, hocketing pulsar (Paul Kerekes’s Pressing Issues) to slow motion sonic vivisection (Ian Gottlieb’s Threading Light).

While Dissections and Body Parts were continuous shows, the constituent musical numbers were independently composed works stitched together in what Dan Schlosberg calls an “abridged composer-performer model.” During their week at Avaloch, the boys of Invisible Anatomy (Fay Wang was unable to attend) decided to generate new material for their forthcoming Transfigurations[1] through a more improvisational compositional model.

Since the members of Invisible Anatomy are gifted performers with what Paul Kerekes calls “composer-y” brains, why not harness their collective strengths as orchestrators and developers of musical material and manipulate each other’s ideas in real time? After a few days of improvising and becoming more comfortable with each other as performers, Invisible Anatomy settled into a “transfiguration” rhythm, using minuscule nuggets of material as starting points in order to (as Brendon Randall-Myers puts it) “collectively build this thing which everyone has equity in.”

Paul Kerekes brings two musical ideas into rehearsal: a chord progression and a fragment of one of Fay Wang’s pieces that he had extracted and “transfigured,” a snappy scale passed among the group. Kerekes shoots his progression (a “numbered sequence of inquisitive, vague, and suggestive verticalities” is probably more descriptive) to each member’s iPad. 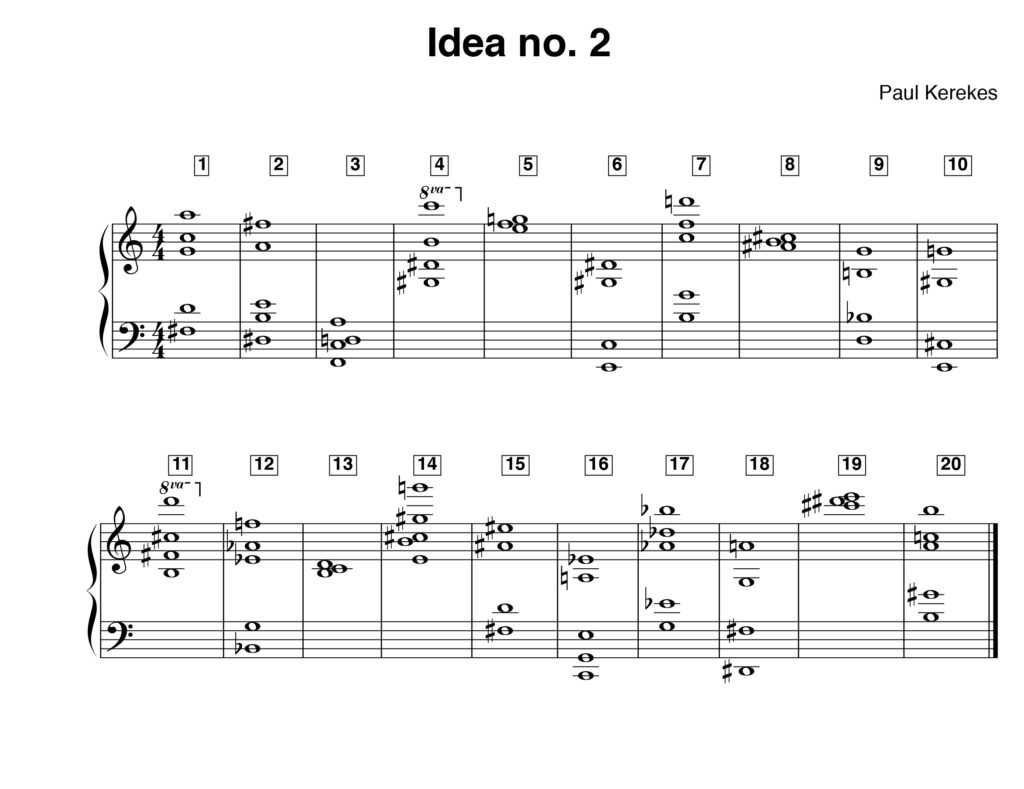 The boys take turns at the helm, each offering a broad theme for the next run through—“hocketed, without attack”—which they apply to their instruments while buttressing with their own thoughts. Brainstorming is quick and polite and perhaps a bit ADD. Minute and enormous changes are equivalent, and the work appears non-teleological until “Paul’s” piece is set with the firmness of an underdone quiche. It’s a disfigured, sickly chorale constructed of sighing, groaning, articulation-less sounds sliding and sliming (in the best possible way). Schlosberg and Kerekes’s piano and keyboard playing melts into Randall-Myers’s guitar, Wallace’s bowed vibraphone, and Gottlieb’s sickly long tones. By the end of the week, the group has generated almost 20 minutes of their new show using this working method–a flight of musical follies touching down briefly amidst austere harmonic totems, absurdist cowboy music, and vaudevillian settings of warning labels.

What’s immediately noticeable during Invisible Anatomy’s rehearsals is that there is no functional boundary between performer and composer. They aren’t afraid to get dirty with each other’s ideas and tend to treat everything as their own composition. A deep awareness of each other’s compositional and performative strengths allows them to connect the dots more quickly and create more idiomatic music with grace.

I’m struck by two things. First, I am entranced by how Invisible Anatomy’s serpentine creative process results in work that reeks of form, structure, and development. At the same time, the lack of waste makes me jealous. As a percussionist steeped in a more conservative collaborative method—note learning, making idiomatic suggestions to composer friends, learning revised parts, taping over hastily reprinted pages—it’s a fantastic time saver.

Invisible Anatomy’s dynamicism and playfulness is mirrored in another group concurrently in residence at Avaloch. Triplepoint Trio (Doug Perry, Sam Suggs, and Jonny Allen) exist somewhere within contemporary music and jazz, and each member is a classically trained performer, improviser, and creator. This drum/vibraphone/bass trio is made up of Avaloch veterans: they’ve attended as a group in 2016 and 2015, and Doug Perry and Sam Suggs have also come with other groups.

For Perry, Allen, and Suggs, arrangement, composition, and performance are almost the same act. During Invisible Anatomy’s stay at Avaloch, Triplepoint was developing pieces by Perry and Suggs, each of which mobilized the unique talents of the group. Doug and Sam brought ideas ranging from a single chord to a fully fleshed out arrangement to the group. Through improvisation, the edges of the work are gradually hardened, and the piece’s “instigator” tends to have the final say over the large-scale structure.

What’s great about Triplepoint Trio is the way in which these skills seep into their performances of more “fixed,” predetermined music. While at Avaloch, the trio workshopped a new piece by Michael Laurello, written for Fender Rhodes, bass, and vibraphone, and in 2015 they used their stay at the farm to work on music from Invisible Anatomy’s Brendon Randall-Myers and Paul Kerekes. In each case, the composers created bounded material, but the performances were improvisational, spontaneous, and joyful. 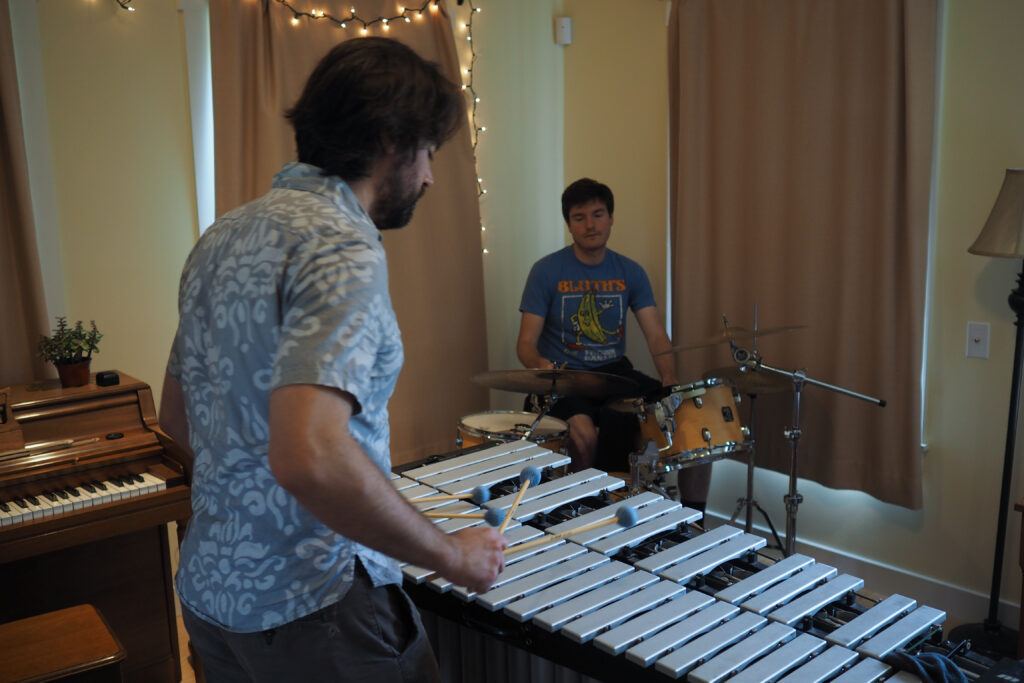 A Focus on Process

Both Triplepoint and Invisible Anatomy were productive collaborators during their time at Avaloch. So what? Was there something different about being here, surrounded by apples, blueberries, corn, and cookies, when compared to their normal rehearsal spaces? Did physical space have an impact on their creative work?

Obviously, being at a residency has logistical benefits. Ensembles are able to leave their percussion forts and jungles of electronics set up during their stay, saving a lot of time. Ensembles that have been to Avaloch tend to point towards the value of being “away” to create, having a dedicated time and space for a specific project.

Lastly, it seems as though the lack of pressure to leave with something concrete allowed Invisible Anatomy to focus on refining their creative process. For ensembles of composer/performers, neither the tight, goal-oriented schedules of summer festivals nor the creative isolation of writers colonies fit.   At Avaloch, both Triplepoint Trio and Invisible Anatomy were able to stretch their legs creatively while being inspired by the diverse community around them. For Invisible Anatomy’s Ian Gottlieb, the difference was clear: “At a seminar or festival, part of the reason to go is to walk away with something: a recording, or some networking experience; here the highlight is on process.”

Next time, I want to take a look at a few collaborators for whom physical proximity allowed for speed in composition and interpretation. Stay tuned!