Summer Residency Snapshots: Into the Workshop

Composer/performer collaborations may run in both directions at once: input from performers can help composers create more easily interpretive, idiomatic work, and composers can bring interpretive clarity to hard to parse scores while writing with their collaborators in mind.

This week I want to explore the bread and butter of composer/performer collaborations—workshopping sessions—and follow two collaborations at Avaloch that are using workshopping periods to develop nuanced interpretations while helping create more idiomatic notation and performance practices. For QuaQuaQua, workshops were an indispensable interpretive aid in preparing François Sarhan’s theatrical Situations. For Arx Duo, intense work with composers Alyssa Weinberg and Justin Rito allowed them to help composers who had never previously written for unusual percussion setups to create, notate, and revise quickly. Both projects highlight the way ideas in composer/performer collaborations may run in both directions at once: how input from performers can help composers create more easily interpretive, idiomatic work, and how composers can bring interpretive clarity to hard to parse scores while writing with their collaborators in mind.

QuaQuaQua is a trio of percussionists—Adam Rosenblatt, Terry Sweeney, and Tatevik Khoja-Eynatyan—interested in the boundaries between theater and concert performance. They came to Avaloch to work with French composer (and professor at Berlin’s UDK) François Sarhan on his Situations, a collection of short, witty, challenging, and diverse theatrical works. QuaQuaQua’s time with Sarhan was invaluable for its dense transmission of the kind of oral performance practice especially necessary for theatrical percussion works.

Because the act of playing percussion is inherently visual, percussion music has grappled perhaps more than any other instrument with the relationship between physical and musical gesture and how to expand the gestures required to play our instruments into larger actions. Although “theatrical music” is an extremely diverse category, percussionists often deal with the descendants of Mauricio Kagel’s “Instrumental Music Theater,” where “theatricality” is the result of extremely detailed prescriptive notation. In such works (Kagel’s Exotica or Dressur, Aperghis’s Les Guetteurs de Sons, or any of Trio Le Cercle’s retinue of commissions), performance practice is dictated by the material of the score, awareness of the general characterizational strategies used in parallel works, and, most effectively, a strong oral tradition—either from composer to performer or from performer to performer. 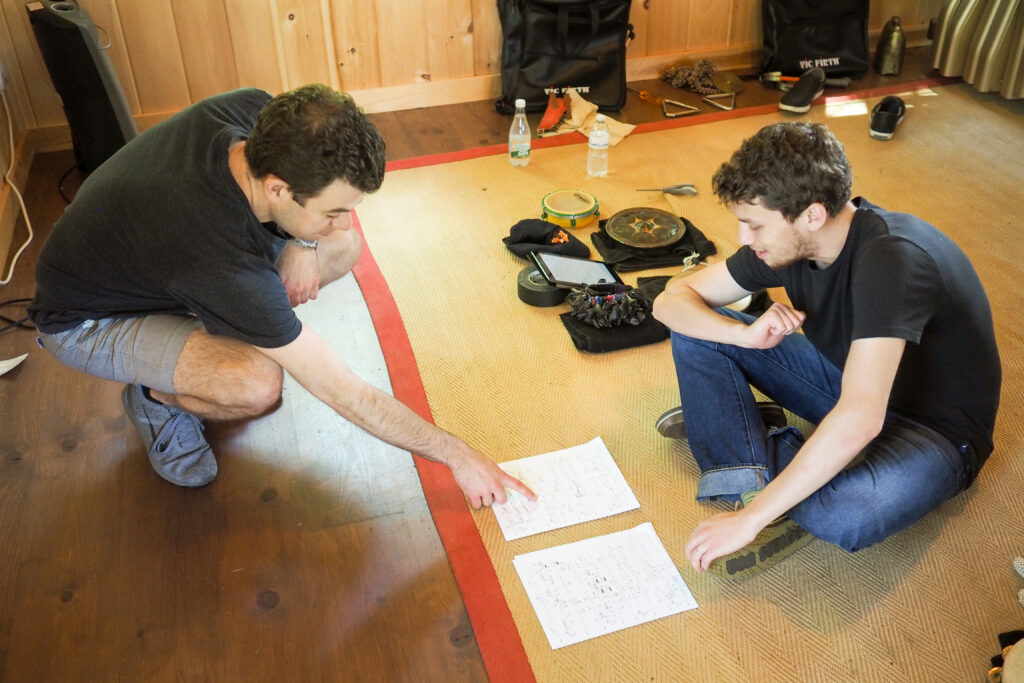 The author with Adam Rosenblatt

QuaQuaQua’s work at Avaloch took this form, and the density of their workshop sessions allowed Sarhan to quickly and effectively articulate prescriptive details about the execution of his pieces while providing comment on overall performance practice.   In “Situation 15,” Khoja-Eynatyan and Sweeney sit on either side of Rosenblatt, all three staring ahead. With Kagel-ian severity Rosenblatt twice performs a series of rhythmic tapping gestures on either side of his head at coordinated heights. During the first iteration, Khoja-Eynatyan and Sweeney alternately raise and lower gongs, aluminum foil, knives, and scissors in a series of coordinated gestures. When Rosenblatt repeats the gestures, they occur simultaneously with attacks on drums, gongs, and woodblocks. Rosenblatt never hits the objects, but their placement relative to Rosenblatt’s hands is crucial to the piece’s narrative. During the first iteration, Rosenblatt appears to be hitting the “accessories.” In the second pass, Rosenblatt’s gestures miss the objects, but Sweeney and Khoja-Eynatyan’s hits provide an imagined attack. As one might imagine, this execution requires extreme precision. In this first section, the three players’ vertical positioning must be exact and their rhythmic timing silently coordinated. Rosenblatt’s hands must come extremely near, but never touch the alternately forgiving (aluminum foil) and painful (scissors, knives) objects. In the second section, QuaQuaQua needs to accurately convey a distinct variety of vertical positions with one hand while playing rhythmic figures with their other. 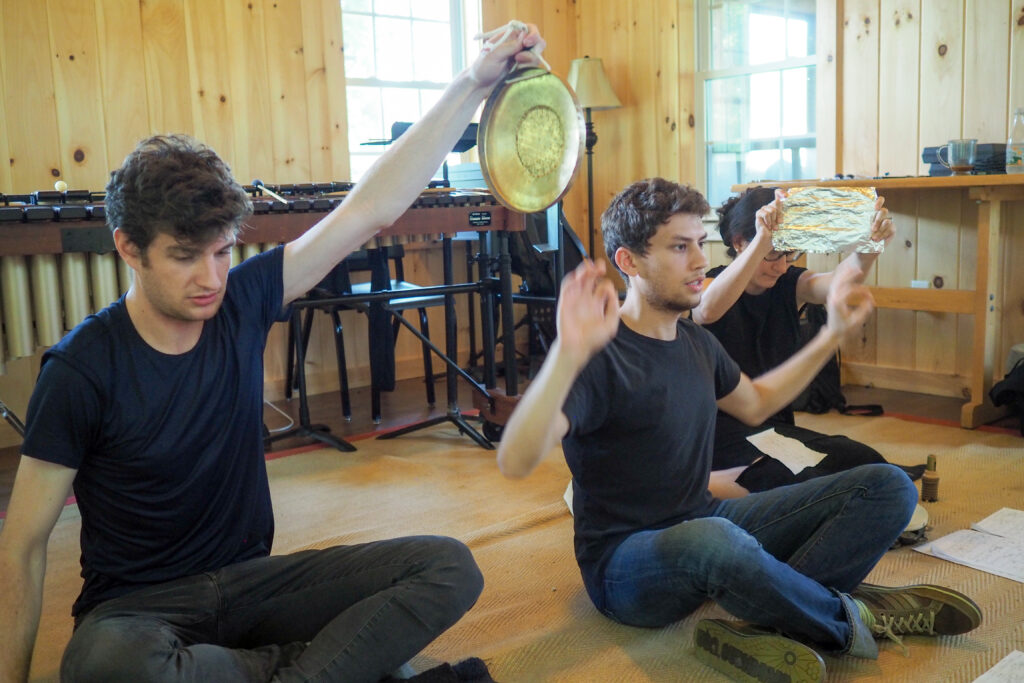 Rosenblatt characterizes Sarhan’s role with the ensemble as “more like a stage director than a composer.” He corrects their spatial placement and rhythmic execution, offering thoughts as the group rehearses rather than commenting on larger run-throughs. He argues for rhythmic fidelity while clarifying his unique and problematic notation for vertical positioning through demonstration and description. The piece’s score is specific about certain parameters but surprisingly mum about how the essential visual elements may be foregrounded.

Over their week at Avaloch, I saw a really amazing relationship develop as QuaQuaQua gradually entered the performance practice of Sarhan’s Situations, both through the codified oral performance practice and the text of the piece. Because many of the “situations” depend on Sarhan’s explanations, QuaQuaQua wanted to use their time at Avaloch to turn Situations into what Rosenblatt calls “more easily transmutable documents,” either by recording performances with Sarhan or by editing the scores to provide additional descriptive and prescriptive information. QuaQuaQua’s presence enabled François to make quick changes to his scores that resulted in their idiomatic and impactful performance. In rehearsals, QuaQuaQua articulated passages where notation or difficulty made theatricality difficult to foreground, and Sarhan would revise with an eye towards making the visual elements of his works more easily read in his scores. At the same time, the documentation—the written scores and video recordings—gradually assimilated elements of QuaQuaQua’s performance. Rosenblatt noted that QuaQuaQua’s week at Avaloch began with the trio as interpreters, but ended with the score including their “personalities, conversations over the course of the week, and the relationships [they] had developed.”

Much like Invisible Anatomy, Adam felt that of the lack of pressure to leave Avaloch with a final product was “gigantically freeing,” and made QuaQuaQua more productive than in other rehearsal environments. In QuaQuaQua’s case, it set the groundwork for future collaborations while creating a more definitive performance practice around some of the Situations. The opportunity to perform, however, allowed them to receive constructive and friendly critical feedback. In the end, the trio left with important videos (check them out on QuaQuaQua’s YouTube channel) of their work with François, and a sense of interpretive empowerment. The group will be performing some of these Situations at the Capital Fringe Theater in Washington, D.C. in early September.

While the new notational systems and visual theatricality of Sarhan’s Situations are daunting, I would argue that most pieces for percussion include similar challenges. Typically, percussion works adopt individualistic instrumentations, individualistic notation systems, and unique sound worlds. The upside is that our repertoire is colorful and dynamic. The downside is that almost none is sight-readable. In “Developing an Interpretive Context: Learning Brian Ferneyhough’s Bone Alphabet” (later revised into a book chapter), percussion demigod Steve Schick reflects on how “an artificial skin of practical considerations must be stretched tightly across the lumps of a living, breathing piece” when learning it. Noting that in much percussion music, instrumentation—the very sound of a piece—is not extremely determined, he asks, “How do decisions made during the initial phases of learning, although fundamentally different as mental activities from those of the final product, shape and make inevitable an interpretive content which steers the piece in performance?” 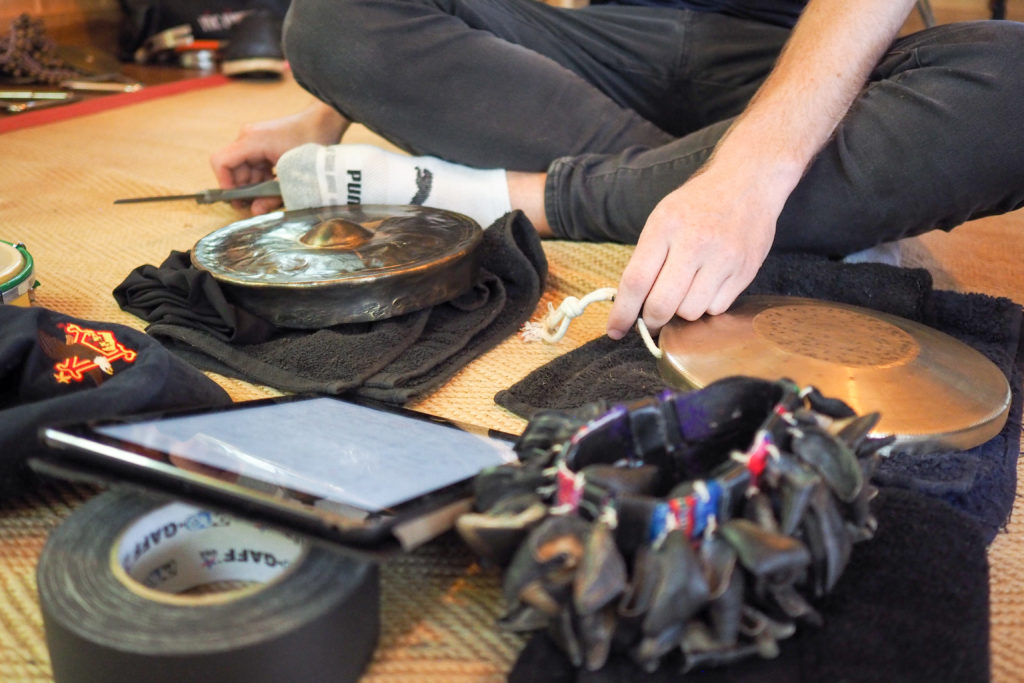 As a result, most percussionists are used to learning a percussion piece twice: picking an assortment of instruments, finding a set up, and learning the material, then revising both to maximize idiomatic playing and interpretive flexibility. In some cases, this process is shortened by determinacy from composers, but in others (Xenakis’ Psappha, for example) the score seems to ask more questions than a performance can answer.

arx duo, the virtuosic tandem of Garrett Arney and Mari Yoshinaga, came to Avaloch with an intriguing percussive project which ended up making this process more efficient. I followed their rehearsals with Justin Rito and Alyssa Weinberg. (Also a part of this project was Nick DiBernadino, who was only at Avaloch for a short time)

For Alyssa Weinberg, the process of creating her Table Talk began with sonic and logistical brainstorming. Weinberg had an initial idea for a “four hands” vibraphone set up—a single vibraphone played with both players standing on opposite sides of the instrument and facing one another. At the same time, Weinberg was interested in preparing the vibraphone, placing various objects on the surface of the instrument to allow for quick pitched and unpitched material.   Yoshinaga and Arney began with Alyssa’s setup and brainstormed additional instruments, suggesting types of sounds that were most idiomatic to play, most durable, and had the widest range of colors. To Weinberg, the fact that the three “collectively constructed a new instrument together that day” granted Yoshinaga and Arney more authority to give idiomatic musical ideas, textural possibilities, and other ways of altering the setup of the piece over the course of the week. 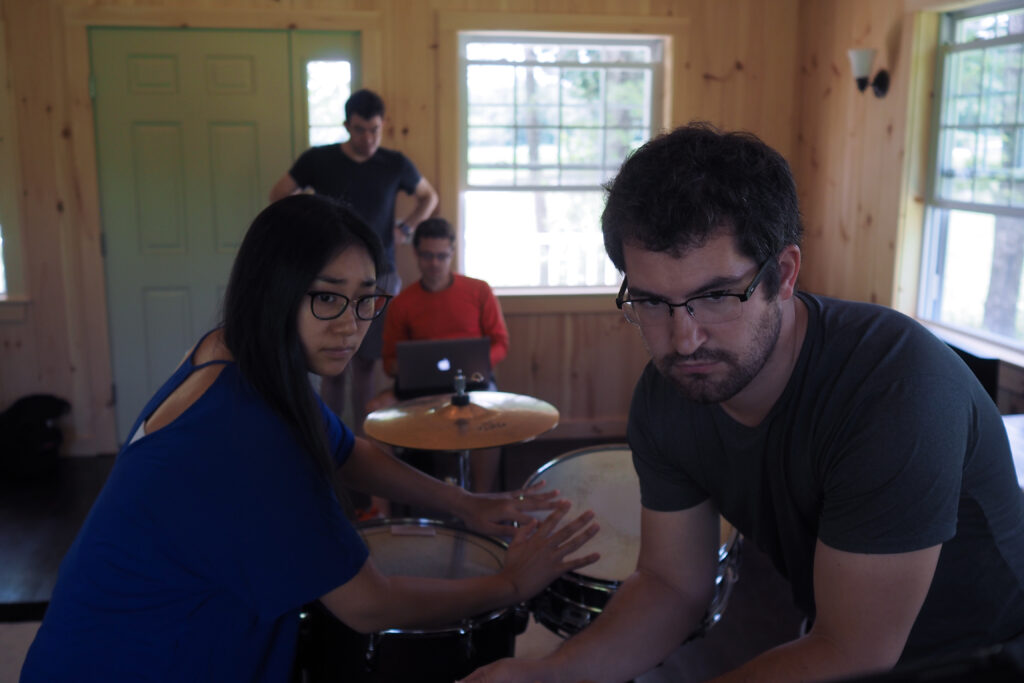 Each day Weinberg would write a new section, meet with arx to workshop it, and then revise and expand. The brevity of her initial ideas allowed her to work with arx very soon in the compositional process, and helped to eliminate extensive revision, unclear notation, and fiendishly difficult passages. The three worked together to develop a notation system and physical setup that made the most sense for the sonic ideas Alyssa had, and she argues that “the piece [couldn’t] be what it is without Garrett and Mari.”

With Justin Rito and All Set, srx followed a similar process of daily sketches, feedback, and revision. The three decided they wanted a piece that was “four-hands on one drum set,” and their work centered a musical lexicon that would be visually arresting, eventually settling on a small setup of drum set components around which both percussionists rotate. Rito, Weinberg, and DiBernadino’s pieces were premiered shortly after arx’s stay at Avaloch.

In this dialogue, both srx and their composer friends used their expertise to create works in which both parties have ownership. Arney and Yoshinaga used their expertise as percussionists to helped Rito and Weinberg explore timbral possibilities, codify and organize their sounds into logistically and theatrically cogent setups, and design notation systems for maximum playability. Weinberg and Rito supplied narrative possibilities, theatrical connections, and surprising sound combinations. At the same time, their collaborations leveraged their friendship and flexibility to reduce time learning, rehearsing, revising, and re-learning complex percussion music.

In honor of the impending opening of the academic semester, next week’s edition is a preemptive “What I Did On My Summer Vacation” collaboration book report, talking about New Morse Code’s work at Avaloch over the past two years.