The metaphor of “submission” as my ideal audience intake position has now reached a whole new level for me. Last week, for the John La Bouchardière production of Lera Auerbach’s opera The Blind I attended at Lincoln Center, the entire audience is required to be blindfolded. 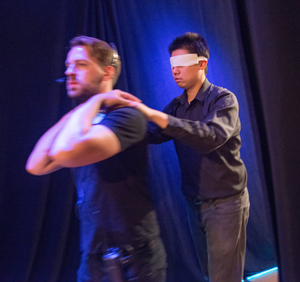 Before audience members enter the venue where The Blind is performed, they must put on a blindfold after which they are personally escorted one by one into the space by ushers. (Photo by Stephanie Berger, courtesy Lincoln Center.)

I have frequently described on these pages how for me experiencing a work of art—whether it is listening to a piece of music, looking at a work of visual art, or reading a book—is an act of submission. That submission is, ideally, an eschewal of self in order to focus as much as possible on something that has been created by someone else. As I’ve stated before, I firmly believe that this act of submission—whether focusing on a live performance or recording, attentively observing paintings or sculpture, or quietly experiencing literature—helps us to better respect and understand the viewpoints of other people and therefore become better citizens in a democratic society. There’s also the added benefit of being able to have an aesthetically transcendent experience with someone else’s creative endeavor in that it gets you to think about the world in a completely new way and therefore will hopefully be a source of enrichment for the rest of your life.

But the metaphor of “submission” as my ideal audience intake position has now reached a whole new level for me. (If “intake” sounds too medical to you, blame it on the paucity of words for experiencing that are not vision-specific rather than an attempt to compare audience members to doctors’ patients; after all these years I’m actually still a lousy patient.) Last week, for the John La Bouchardière production of Lera Auerbach’s opera The Blind I attended at Lincoln Center (which co-produced by American Opera Projects), the entire audience is required to be blindfolded. (Full disclosure: I went to the performance since I was asked to moderate a panel for Lincoln Center in conjunction with this presentation about the arts and the senses. While my ongoing immersions with other senses–which frequently relate back to music–offered some valuable fodder for that discussion, nothing was better preparation than sitting through the actual show.) Anyway, many publications have already published extensive reviews of this production ranging from ecstatic to annoyed. (Even The New York Post weighed in!) Since my ideal role as a member of an audience is to submit to whatever the creators and/or interpreters want me to, I have no desire to play critical can opener. But I will say that I found the performance very moving as well as deeply inspiring both on a creative level and as a life experience. Vivien Schweitzer, in her extensive New York Times feature about The Blind, perhaps best summed up the impact being blindfolded had on being able to appreciate not only Auerbach’s music but also the various olfactory and tactile elements Bouchardière incorporated into the production:

I … found the experience initially disconcerting but then vividly intense, as I became highly attuned to the sounds, sensations and unseen movements unfolding around me.

But what struck me as equally significant as the act of being blindfolded resulting in a foregrounding of all of my other senses, was the element of personal discomfort and vulnerability involved in the process. At first the blindfold was too tight. I wasn’t sure what to do. Ultimately I decided that if it remained too tight, I’d waste my concentration on the tightness of the blindfold and not pay requisite attention to the production so I loosened it after a few minutes. Yet I was still occasionally distracted. From time to time I feared the blindfold would fall off and that I would accidently get a peek of something which would ruin the illusion for me. Also I wasn’t sure if I should keep my eyes closed or open. At one point, having my vision obstructed became so annoying that I took advantage of my loosened blindfold and actually stared down at my shoes through the tiny sliver that had been opened up. I confessed to this in a conversation with Bouchardière, to whom I was introduced following the performance, and he said only half-jokingly that he thought I had cheated. But my discomfort with this particular audience requirement has made me ponder audience requirements overall.

The more I thought about it the more I realized that every time we encounter something outside of ourselves and wholly give ourselves up to doing so there will be some discomfort and vulnerability. Some people find it an immense personal sacrifice not to be able to talk during a musical performance. I’ve been a motor mouth for most of my life, and the first few times I had to remain quiet during a concert felt unbearable, but once I became acculturated to it I began to get a lot more from the listening experience. The same is true for the constant rewards I get from reading, an activity which eluded me—since I was very hyperactive—until I was a teenager. I still think I can be a better viewer of visual art. Unlike books which can only be read as fast as one’s reading pace, or music which operates according to its own immovable clock, most visual art allows the viewer to determine viewing time. Since I want to see everything, I think I spend too little time looking at individual works. In this case my voracious sight prevents me from seeing more deeply into things. But no blindfold will enable me to better see a work of visual art. Then again, one of the panelists for my Art and the Senses panel, Rebecca McGinnis, is in charge of the access programs at The Metropolitan Museum of Art, including tours for visually impaired visitors which are specifically designed to offer them ways into works of art that go beyond the visual component—touching various objects, sightless drawing as a way to conceptualize two-dimensional space, etc. These programs make it possible for people to have meaningful encounters visual art without needing to see it.

Ultimately our senses can be as much of a hindrance as they are an asset in our ability to comprehend the world around us. How we balance our senses as well as the preconceptions that all too often block that sensory input from being processed is an ongoing struggle for all of us. But most life lessons do not come easily, so the occasional discomfort that is a requisite for a deeper understanding is a small price to pay.