Stravinsky Outside Russia
NewMusicBox
Written By

At any given time there are many inspired and imposing figures who, despite their ambitions, jealousies, and rivalries, themselves never worried about any top ten or top fifty rankings. Nevertheless, for most of the 20th century (if there were indeed to be a contender for the status of the “greatest” 20th-century composer) the honor, as a matter of public perception both in the general public and among professional musicians, would most likely have fallen on Igor Stravinsky. 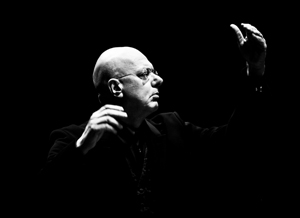 [Ed. Note: The following is a slightly modified version of an essay, reprinted with permission, that will appear as the program note for an all-Stravinsky concert performed by the American Symphony Orchestra under the direction of Leon Botstein this Friday, January 20, 2012, at Carnegie Hall. The program will include two rarely performed compositions written during Stravinsky’s final three decades in Southern California: Canticum Sacrum and Requiem Canticles. Botstein will additionally lead a performance of Stravinsky’s most famous work The Rite of Spring, written long before he arrived in the United States, as part of the ASO’s Classics Declassified series at Symphony Space in New York City on February 26, 2012.—FJO]

It has become all too commonplace to negotiate the complex and tangled fabric of artistic life in history by constructing an artificial hierarchy—lists of the “best” or “most famous” personages—as if painting, writing, or composing were Olympic contests, adequately judged by a single objective criterion. In reality, at any given time there are many inspired and imposing figures who, despite their ambitions, jealousies, and rivalries, themselves never worried about any top ten or top fifty rankings. And the nature of art-making resists such blunt instruments of evaluation. Nevertheless, for most of the 20th century (if there were indeed to be a contender for the status of the “greatest” 20th-century composer) the honor, as a matter of public perception both in the general public and among professional musicians, would most likely have fallen on Igor Stravinsky. Stravinsky, who, unlike Paul Dukas or Felix Mendelssohn, seems not to have suffered from modesty, self-doubt, or excessive generosity to others, would have been only too pleased. Perhaps the best way to think of Stravinsky’s standing during his lifetime and for several decades after his death in 1971 is to compare him to the place his contemporary, Pablo Picasso, came to occupy in the visual arts as emblematic of the 20th century. 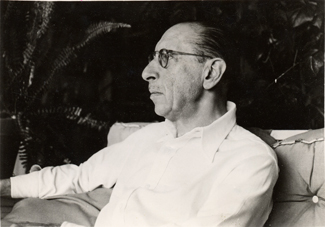 The reasons for Stravinsky’s prominence and dominance are many. First and foremost are the range and quality of Stravinsky’s output, sustained over a very long and productive life. Second, Stravinsky was a shrewd and effective promoter of his own music and career. Third is the variety of styles and genres in which the composer worked, from the stage to small chamber music works. Fourth—and perhaps most intriguing—are the prominence and influence he managed to achieve in three very disparate and discrete public spheres and contexts. The first was his native pre-revolutionary Russia, into which he was born in 1882. The second was French-speaking Europe, in France and Switzerland, where the composer lived and worked for nearly three decades before World War II. Stravinsky started his career outside of Russia as a Russian working abroad, and then as an exile. But he ended up as an exponent of contemporary “French” music. Stravinsky spent his final three decades (from 1939 on) based in the United States, where he was regarded initially as partially Russian, but equally French as an exile. Ultimately, by the early 1960s, he came to represent American music, at home in the United States and abroad.

Stravinsky’s career began in Russia, where he studied with Rimsky-Korsakov and where he formed a deep and lifelong artistic and spiritual attachment to Russian folk traditions, the Orthodox religion, the Russian language, and the Russian cultural heritage in music, the visual arts, and literature. The “Volga Boatmen” arrangement for Chaliapin gives evidence of this. In Paris, where he befriended Claude Debussy, Stravinsky exploited the rage for presumed exoticism of all things Russian, and rose to international fame through the success and notoriety of his ballet scores written for the Ballets Russes.

One single date has come to serve as an historic marker for the explosion of modernism onto the cultural scene—a moment in time that seemed to bring the 19th century to a close and usher in the 20th: the May 29, 1913 premiere of The Rite of Spring. In his years in France, Stravinsky came to dominate the musical and cultural scene, taking his place alongside Valery, Gide, and Cocteau (forgetting Coco Chanel in this context) as a luminary. Through Nadia Boulanger, arguably the most important single teacher of a younger generation of composers, many of them Americans, Stravinsky influenced the course of American concert music. In his American years, Stravinsky’s fame and reputation continued to grow, not as an outsider (the way other émigrés, such as Schoenberg, saw themselves), but as an insider in the American scene. In part through his association with Robert Craft, who would become his chronicler and assistant, in his last years Stravinsky was astonishingly productive, writing in a new way, adapting modernist techniques developed by Schoenberg and Webern. 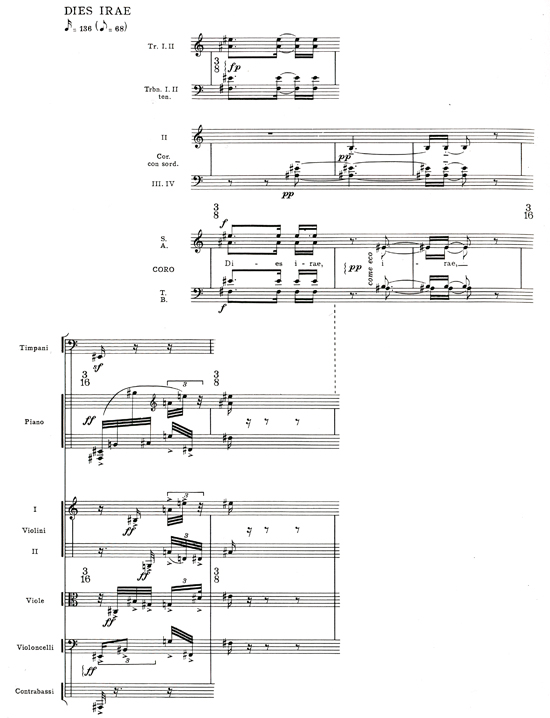 A passage from the score of Requiem Canticles which demonstrates Stravinsky’s idiosyncratic adaptation of techniques developed by Schoenberg and Webern.
Requiem Canticles by Igor Stravinsky
© Copyright 1967 by Boosey & Hawkes Music Publishers, Ltd.
Reprinted by Permission.
All in all, therefore, one can locate roughly three distinct stylistic periods in Stravinsky’s career. The first was an unmistakable “Russian” phase; Russian influences are obviously audible in the Firebird, for example. This gave way to a form of self-consciously international neo-classicism, not dissimilar from a parallel development in architecture, particularly the work of Le Corbusier. The high point of that period was reached during the late 1920s and early 1930s in Paris. In the years of transition from Russia, great works that mirror the trajectories forwards and backwards in time were written, such as Les Noces (1914/1917) and The Soldier’s Tale (1918). The legacy of neo-classicism formed the basis for the third period (the most audibly modernist period, that of the 1950s and 1960s) when the composer was in the United States, where he wrote among other things, together with W.H. Auden, his operatic masterpiece The Rake’s Progress (1951) and an opera for television, The Flood (1962).

At the same time, just as in the case of Picasso, the shifting stylistic surfaces in each period never masked a consistent distinctive character and quality to Stravinsky’s music. A set of proverbial fingerprints, revealing a unique musical imagination and personality, can be located in all of Stravinsky’s music. Central to Stravinsky’s aesthetic was the belief that in the end music was separate from language, and demanded a formal economy, a structure, and rigorous logic all its own. At the same time, Stravinsky understood his audience and the public. He had an uncanny sense of the theatrical in music and an elegant sense of humor and irony. There was a clarity, transparency, and lightness to his music reflecting a deeply felt aversion to Wagnerian grandiosity and Mahlerian metaphysical pomposity. A lucid rhythmic originality, vitality, and complexity inhabit many of his scores, but the asymmetries and surprises all seem seamless and natural. The discipline of writing for dance taught the composer that the overarching architecture of a work, its musical flow and narrative, could not be obscure. Stravinsky used musical time with uncanny effectiveness, rarely if ever wearing out his welcome with his audience or his fellow musicians. His command of instrumental and vocal sonorities was equally impressive, as was his capacity to make his material memorable. Stravinsky’s extensive output was startling in its consistency in terms of rigor, invention, and quality.

Yet, like Picasso, although Stravinsky’s name and reputation remain in tact, the interest of the public has shifted away from much of his work. The three great ballet scores, The Firebird (1910), Petrushka (1911/47), and The Rite of Spring, are cornerstones of the orchestral repertoire. Many later scores are still heard, but far fewer than one might think or wish. This is especially the case with Stravinsky’s later works. Indeed, many of his mid-career and later works survive on the public stage as a result of his friend Balanchine’s choreography, including pieces not intended for dance, such as the Violin Concerto (1931).

If there is tendency to simplify how we approach the history of music by constructing lists of the “top ten,” there is a parallel allure to the idea that there is some “essential” identity to each composer in terms of his historical roots, so to speak. Bartók becomes quintessentially “Hungarian,” Copland “American,” Debussy and Ravel “French,” and Sibelius “Finnish.” As a result, we turn to Americans for the “best” performances of Copland, Hungarians for Bartók, the French for Debussy and Ravel, and the Finns for Sibelius. This makes marketing easy and lends some hint of authenticity to our experience as listeners, as if there might be some secret spiritual or national bond, framed by blood, language, and soil, between a composer and his music, requiring decoding by someone who shares that bond. 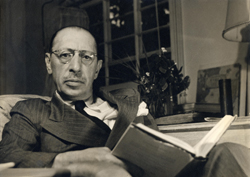 Even when this might plausibly apply to a composer (e.g. Musorgsky as Russian or Smetana as Czech), it assumes some fixed generalized category—Russianness and Czechness that seem to transcend historical change. But what do we make of Stravinsky? Despite his evident identity as a Russian émigré after 1917, this reductive assessment violates not only his own views about the nature of music, but the facts of his career and the range and variety of his compositions. Recourse to the notion of exile, in the case of Stravinsky, only complicates the problem. Rachmaninov was also an exile after 1917. For him the experience of being separated from his homeland was traumatic. He sought to insulate himself in an environment marked by nostalgia. He tried to recreate the atmosphere of his native land when he was in America, England, and Switzerland. Prokofiev, who like Stravinsky found himself abroad when the October Revolution happened, and like Stravinsky sought to make a career in America and France, in part because he felt always in Stravinsky’s shadow, returned to Russia in the mid 1930s. But Prokofiev, unlike Stravinsky, had no spiritual ties to the Orthodox Church and was never a virulent anti-Communist. Stravinsky fit in, in France and America, as a leading and successful participant at the center of musical and cultural life, and never at its margins.

Vladimir Nabokov reinvented himself and became one of the greatest writers in English and one of the most trenchant observers of post-War America. Stravinsky managed to reinvent himself too, not once, but twice: first in France and then in America. Like Nabokov, he used the position of exile to forge a synthesis with his new circumstances and reach in new ways various new publics. The link to the past was never hidden or disavowed (as Kurt Weill attempted). Stravinsky, fortunately for him, unsuccessfully tried to keep his music in circulation in Germany after 1933. Displacement and the necessity to adjust may have been unwelcome but they could still be understood as acts of practicality, not fear or conscience. Exile provided Stravinsky with new remarkable sources of inspiration.

Stravinsky was, above all else, a composer’s composer, for whom music can function in the world in a manner that resists facile typecasting, and whose character reflects a dialogue with the composer’s immediate environment. His ambitions, craft, and influence were international and his identity shifted, at different phases in his career, to transfigure distinct milieus and contexts.