A few months after seeing the potential of the guitar/percussion duo during the Living Earth Show this past spring, I stopped in to hear Houston’s Liminal Space present a concert that included two commissioned premiers.

In the new(ish) world of bootstrap new music development, big things can come from the smallest of starts. In contrast to (or perhaps in response to) the slow-to-change, large-scale organizations that are dodging strikes, lockouts, and other potential extinction events, smaller, more nimble groups that are able to hide from the nuclear winter of dried-up funding, atrophied audience, and fracturing infrastructure are thriving. In contrast to the large institution model which involves the performance of largely 18th- and 19th-century warhorses to an audience whose average age is moving steadily upward, ensembles like San Antonio’s SOLI and Houston’s Musiqua have combined smaller forces and adventurous programming to engage with audiences old and new. Emerging from the rubble, these groups find new life in new forms, and though the Pierrot ensemble has emerged as one of the leading configurations, other families are taking shape as well. While the Pierrot is comprised of traditional instruments, the catch-all potential of the “plus percussion” option is quite compelling and has played a significant role in the development of music for the ensemble. When the percussion is taken out of this traditional context and placed alongside another primarily 20th-century chameleon, the guitar [1], a potent new pairing is created. A few months after seeing the potential of this duo during the Living Earth Show this past spring, I stopped in to hear Houston’s Liminal Space (guitarist George Heathco and percussionist Luke Hubley) present a concert that included two commissioned premieres. 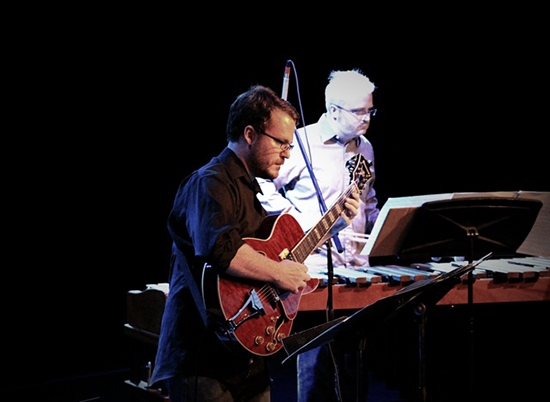 I arrived at the Frenetic Theater just outside of downtown Houston about twenty minutes prior to the show and had a chance to survey the facility and the crowd. The multi-use venue geared towards dance and theater held a good-sized Sunday night crowd. Spread out in the 100-seat theater, some patrons had taken their chairs while others stood chatting, and it was in this relaxed setting and with little fanfare that Liminal Space walked onstage to start the show.

Originally written in 2008 for two bass clarinets, Mark Mellits’s Black has since been rearranged for a variety of duos and lent itself well to the guitar and marimba incarnation. Rolling lines and punchy riffs which brought to mind a mid-’80s King Crimson were couched in symmetrical phrases and sections, their rock and roll roots showing. Both players were all in for the bulk of the work, and Heathco’s clean guitar tone with just a hint of overdrive for body [2] complimented the mellow tone of the marimba.
The evening’s concert was the closer of the inaugural season, and Hubley took a minute to describe the genesis of the group, which made its debut with a John Cage centenary concert last September. Among their goals is the regular commissioning of new music for the ensemble, and to that end Liminal Space has commissioned nine composers in the Houston area to compose new works for guitar and percussion. The next piece on the evening’s program, Apparatus by Mark Buller, was the second of two world premieres of work written for Liminal Space as part of their 2013 New Music Initiative. Apparatus started with a simple additive process played in unison, the two slowly expanding lines diverged recalling Reich’s Piano Phase, only to eventually return to their original position. The second movement began with pulsing dyads outlined in crescendos and decrescendos, hairpins rising and falling while an initial symmetry gave way to odd groupings and smaller divisions. This lead to a clearer separation of the parts as arpeggios in the marimba formed a framework for leaping octaves in the guitar. A recollection of the first movement had the guy behind me tapping (a bit loudly…) his feet and bopping his head, though it was funny to hear him lose the rhythm as the patterns began to phase once again.

Taking a quick break from the duo action and a modest step back in time, Heathco performed the solo plus tape version of Reich’s Electric Counterpoint. The work holds up well 30+ years later, and the relative ease with which an enterprising guitarist can record and playback the parts on a laptop should allow for more performances than ever before. Hubley then took his moment in the spotlight to perform Cage’s In a Landscape. Written for dancer Louise Lippold in 1948, its modest range and bifurcated octaves give the work a controlled and harmonically segmented sensibility. A pleasant, quasi-pentatonic sound resulted as scales rose and fell in comfortable mid-tempo eighth notes, every one taking its place from a list of dance counts provided to Cage by Lippold.
The closer for the evening was the second NMI world premiere of the night, Eric Martin’s You didn’t build that!, which was a nod to some of the rhetoric of the last presidential election cycle. A guitar intro which begged to be joined by drum kit [3] was interrupted abruptly by the marimba, part of the concept of the piece in which each instrument attempts to one-up the other. This led to a more traditional back and forth of sorts, with the guitar backing the marimba for a time and the marimba returning the favor. Harmonically straddling the modal/white-note world, the two instruments morphed comfortably from foreground to background before reaching the work’s conclusion.
Liminal Space put on a terrific show for a clearly enthusiastic audience. The guitar/percussion combo is quite approachable and particularly versatile, and while the idea that the use of these more familiar instruments will make inroads with those outside the new music community is debatable, it can’t hurt. When a traditional string trio or brass quintet takes the stage, adventurous new music converts may be inclined to check out before the first note. However the familiarity of the guitar (or the laptop) has the potential to bring something from an audience member’s world into the one they are about to experience, and who doesn’t like watching someone beat on things with sticks? [4] Regardless, the music on tap that evening was certainly as rich and involved as any one might hear from more traditional instruments, and with the 2013-2014 season lined up, Liminal Space is in a great position to be at the vanguard of a whole new ensemble movement.

1. In another life, I was a classical guitarist and am well aware of the rich pre-20th century repertoire for the instrument. I’m also aware that a few guitarists out there read that sentence and immediately began harrumphing all over the place, so just relax.

2. It’s a tone I’ve always associated with jazz, but given that I’ve listened to and played very little jazz, you can take my evaluation of this “jazz tone” with a big old grain of salt. Heathco was playing a gorgeous red hollow body, and it’s certainly possible that the hint of overdrive was just a result of the pickups coloring the sound. Or aliens.

3. I’ve played in approximately a million rock bands, so you can take this estimation to the bank.

4. It’s been brought to my attention that there is more to percussion than this.