In addition to a wide variety of sculpture, painting, and installations, the Blanton Museum features the Soundspace series which pairs composers with choreographers and dancers with instrumentalists to create interdisciplinary works that interact with and explore various spaces and works of art within the museum.

You know how you tend to learn new things about your town when friends come to visit? This might involve a visit to that restaurant you never got around to checking out or to the bookstore you pass every morning but haven’t yet worked into your schedule because you’ve been reading everything on a tablet? Or at least you planned to read everything on the tablet, but hilarious kitten videos got in the way? Well, the kittens have gotten the best of me because despite living in this town long enough to remember when “Keep Austin Weird” was a way of life and not a t-shirt slogan, I’ve still managed to miss out on the Blanton Museum. Located on the south side of campus, this museum has been a part of the Austin community in one form or another for nearly fifty years. In addition to a wide variety of sculpture, painting, and installations, the museum features the Soundspace series which pairs composers with choreographers and dancers with instrumentalists to create interdisciplinary works that interact with and explore various spaces and works of art within the museum.

Despite showing up early there was little room remaining in the largely kitten-free viewing area of the second floor gallery. Cellist Elizabeth Lee, with her back to the wall and framed on both sides by two huge paintings, sat prepared to perform Ethan Greene’s Aerial Ballet which is a “re-imagined recitation of Cornelius Eady’s poem of the same name.” As the piece began, dancer Beth Terwilleger began pacing cat-like around the space, her arms seeming to do their own dance in counterpoint to the motion of her legs and body.

And then the fire alarm went off. 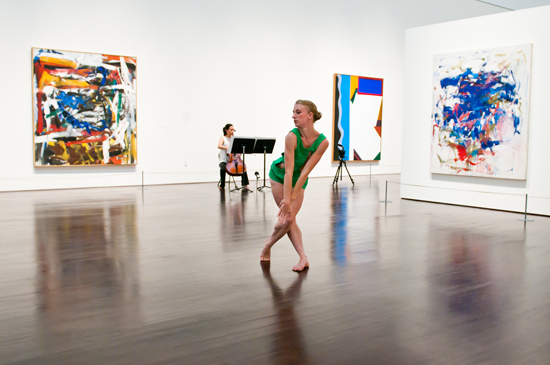 Thirty minutes later, we were all back inside. Lee bowed long, continuous, pulsing arpeggios passages across all four strings while Terwilleger resumed her movement, at times stopping completely and striking a pose in response to changes in the music. Chromatic smears down the neck followed by declamatory, angular, melodic lines were contrasted by the smoother-flowing movement of the dance. In fact, much of the dance closely followed (or directly contrasted) the ebb and flow of Greene’s music; certainly the bread and butter of traditional dance but not always the case in contemporary performances which can at times seem like two different works of art simply coexisting. 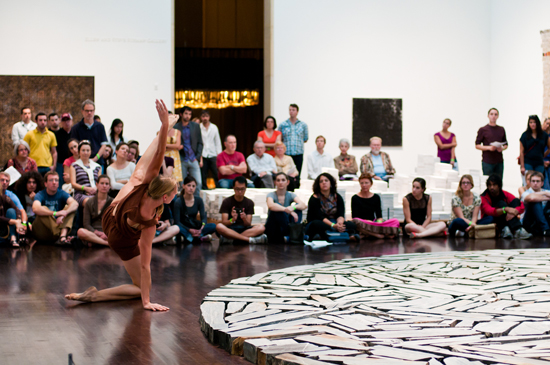 Following Ariel Ballet, we followed choreographer Michelle Thompson into another large gallery for the second performance which featured violinist Molly Emerman playing the Bach Sonata no.1 in G minor with dancer Magdalena Jarkowiec. Separated from dancer and violinist by a large round rock installation some 20 feet in diameter, the audience watched as Jarkowiec arched her body over the installation, testing the boundary between art and artist and making yours truly just a bit nervous about the possibility of that boundary being breached. While most of her performance was opposite the audience, at times she circled the installation completely, testing the audience/performer boundary as well. 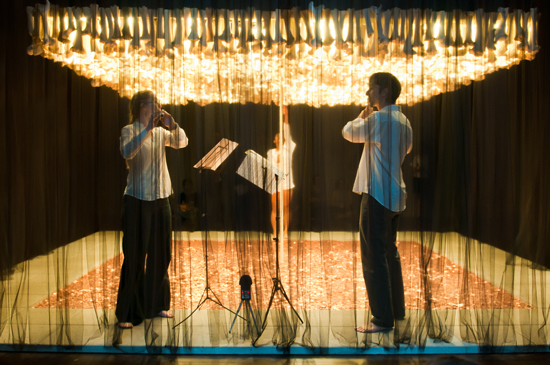 We continued our journey through the museum with the third piece, Duet in E minor, this time by J.S.’s eldest son, W.F. Flautists Francois Minaux and Joanna Martin played inside a square installation (countering the previous large room with a round structure) with tens of thousands of pennies on the floor and backlit bones hanging from the ceiling. This smaller room-within-a-room was bordered by sheer gold curtains through which dancer Lisa del Rosario moved during the multi-movement work, her diminutive frame contrasting that of the long-limbed Jarkowiec from the previous performance. The border between performer and observer was further eroded in this movement with del Rosario dancing in very close proximity to the audience. The tension in the previous piece carried over here as well as del Rosario flirted with the penny pool, seeming to defy gravity more than once as her body extended over the pool in concert with the counterpoint of the flute duo. 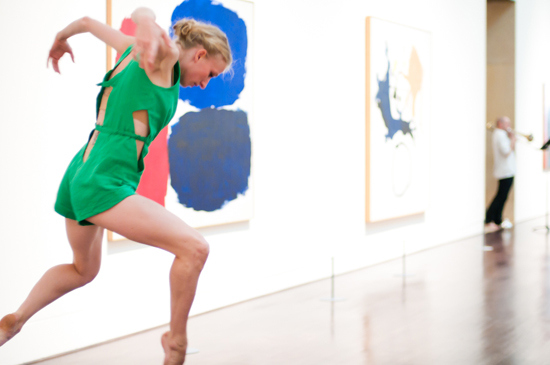 Finally, we returned to the first gallery to hear Mike Svoboda’s Concert Etude performed by series curator and trombonist Steven Parker. Parker was framed in a central doorway on what was the right side of the room relative to our original orientation. Dancer Beth Terwilleger was joined by Emily McLaughlin for this piece, (providing yet another counterpoint, this time contrasting the “two musician/one dancer” setup of the previous piece) both dancers taking their positions framed in doorways that bookended Parker. The piece began quietly with scales running up and down as the dancers played hide-and-seek in the doorways with the audience. Deep swells traded place with low hits as the two dancers used the floor and doorframe as integral parts of their performance, holding doorjambs close and using the thresholds as invisible borders begging to be breached. Through his playing Parker somehow managed to move while standing still while the dancers illustrated a moving stasis; at once thrilling and undulating while also statuesque and posed against the full tones of the trombone. The second movement started with foghorn calls accented by Harmon mute. The dancers came out to play, at times running the length of the room only to meet in the middle and immediately return from whence they came. Eighth-note lines gave way to longer and longer figures punctuated by multiphonics and singing into the trombone to harmonize with the trombone’s pitch, which Parker somehow made sound like a Didgeridoo/Tuvan throat singer jam. In the last movement, Parker swapped out the Harmon for a straight mute. Distant gestures gave way to multiphonic timbral dissonance peppered with quarter-tones. As the dancers moved around Parker in close proximity, the notes were swallowed up through his twisting lines in a honking New Orleans Morse code of sorts. As the final notes echoed through the space we could have heard the proverbial pin drop, followed by huge applause.

Of course, the Bach family players have been on the scene for a while, but these performances, with their interaction with dance and art, served to reframe the music in a new light. They felt less like autonomous pieces and more like source material for a larger presentation; less like oratorio and more like opera. The Greene and Svoboda also benefited from a setting in which the audience is not tied to a seat for an hour or two but is allowed to move from one place to another to take in the art from new perspectives. Fire alarms notwithstanding, the afternoon was a great example of how to present new music to audiences. It gave a sense of mobility to player and listener alike, connecting the two by shifting focus, position, and perspective.

I can’t wait to see what they have on the first floor.