What happens when musicians are asked to play from a page of notation that is not standard? How do they approach it? Curator Steve Parker’s latest installment in his SoundSpace series at the Blanton Museum featured several hours of folks doing just that.

I used to have an Australian roommate. He was a former journalist who had lived and worked in Beijing for a number of years, and he regularly spent time writing Chinese characters to keep in shape. One day I saw him working and said, “John, I don’t know how you can possibly read that.” He paused, smiled, and grabbed a blank sheet of paper. He wrote out a rudimentary staff, clef, and several notes and said, “I don’t know how you can read that, mate.” 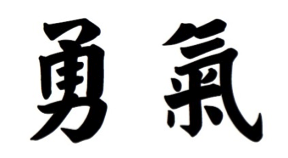 You might take your pre-existing understanding of written language and apply it to what’s  above in order to make some sense of it. I think that the first character looks a bit like a “P” or a “B” and the second looks like an “H” or an “A,” and if I was asked to “speak” these I’d go in that direction. Those two Chinese characters actually connote courage, but since I have no experience in that or any other Asian language, I can only rely on my background. Now what if you saw this? 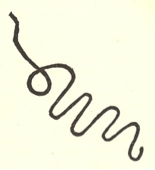 Now we are in a somewhat different world. This is not derived from an actual language, but we use the same set of tools to break it down and make sense of it. Musicians trained in the Western music tradition use a particular type of notation which is standardized (for the most part) the world over. What happens when they are asked to play from a page of notation that is not standard? How do they approach the squiggles? Curator Steve Parker’s latest installment in his SoundSpace series at the Blanton Museum featured several hours of folks doing just that. 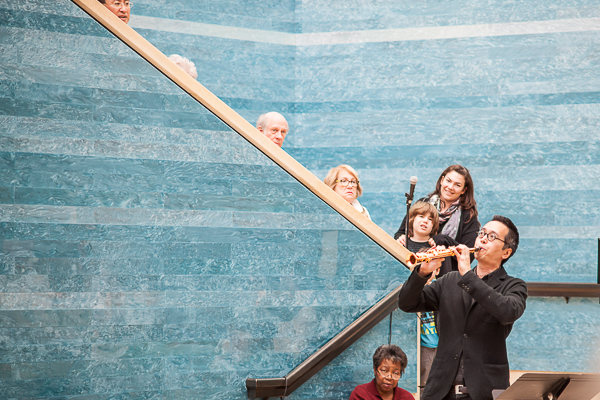 Inevitably upon entering the Blanton Museum’s cavernous Rapoport Atrium one’s gaze turns upwards, and James Fei’s Standing Waves and Viscous Loss added to this sense of grandeur and direction. A braying, squealing affair for sopranino saxophone, this brash overture to the proceedings began near the terminus of the stairway, with Fei eventually moving in small circles and turning to face one way, then another, to fill every nook and cranny with sound. Following this declamatory introduction was a duet of sorts with soprano Kate Bass performing Hildegard Von Bingen’s Spiritus Sanctus Vivificans Vita from the upper level of Rapoport while visual artist Caroline Wright sketched on four large canvases in the center of the lower level. 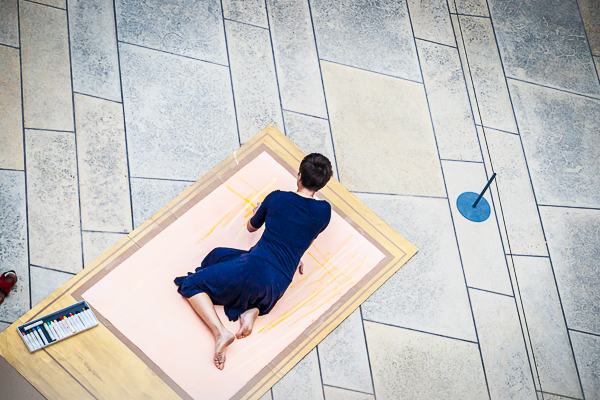 The exchange between the artists drew the audience’s attention up and down between the levels until Thom Echols began a performance of Cornelius Cardew’s Treatise on modular synthesizer and guitar in the Schweitzer Gallery, a few turns down the hall from the upper level of Rapoport. This overlapping was otherworldly, unusual, and completely intentional, and signaled the beginning of the bulk of the day’s performances. Part of what makes SoundSpace compelling is the placement of different simultaneous performances in various galleries around the museum. This both breaks up the linearity of a typical concert and gives a bit of agency to the audience in that they can choose where they want to go and what they want to see and hear at a given time. Of course, part of this festival-like presentation is that you are unlikely to hear everything and often come upon a performance at the halfway mark or just at the finish. The printed programs are detailed and allow you to find specific works and performers, but I personally find it most satisfying to simply wander from gallery to gallery, which is how I like to experience museums anyway. 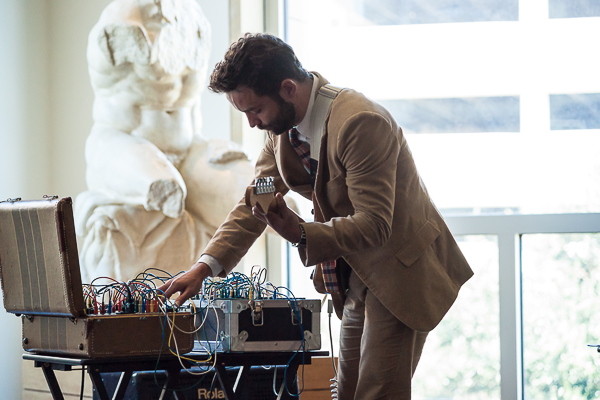 Other highlights were James Syler’s 3×3 Fanfares performed by the New Music Ensemble from the University of Texas at San Antonio. A mixed chamber ensemble with electric guitar, violin, flute, trumpets, horns, bass trombone, and percussion was situated around the perimeter of the large rectangular Huntington Gallery. My impression of the piece (I came in as it was being performed, somewhere in the middle) was that of arrival, as though the work was one huge, sustained tonic. This is not to say it was without tension. In fact, it was like holding one facial expression very intently for a period and observing the slightest of changes that occur. A few galleries over, Jim Altieri’s Seismicity, derived from seismograph readings and rendered by trombone quartet was by and large a gentle rise and fall, the trombones placed in four corners of the gallery and following the contours of the readings before them. 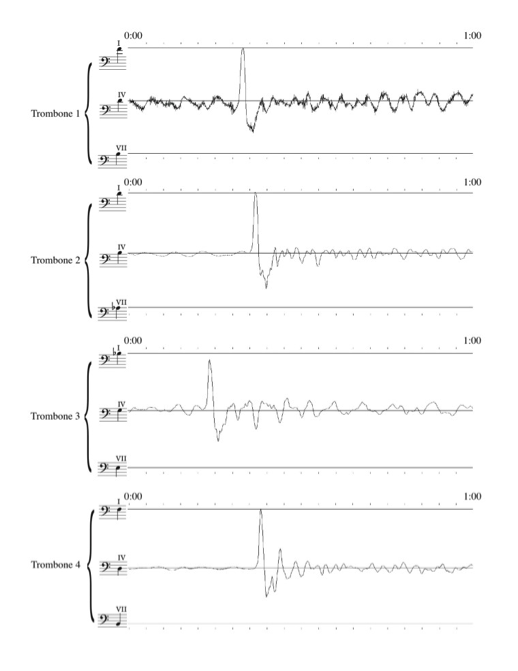 The final work of the day fell in line with previous epic, single-instrument SoundSpace offerings such as Henry Brant’s Orbits. Anthony Braxton’s Composition No. 19 was directed by James Fei, along with conductors Chris Prosser, Ben Stonaker, and Stefan Sanders, and featured players from all over Texas performing the work written for “100 Tubas.” Writing about what it sounded like as the performers entered Rapoport auditorium (playing tubas, euphoniums, sousaphones, and all manner of serious low brass) is an exercise in creative analogy. Among the labored metaphors that littered my notes were: Offstage B-2 Bombers, The Biggest Harley Ever, Like Some Terrible, Ominous Marching Band [1], and Epic Halloween Soundtrack. It was a huge sound, an enveloping sound that not only eventually filled the formidable room but threatened to escape it. This sense of scale was amplified by the fact that the direction from which one hundred pedal tones is coming is tricky to pinpoint, so you’re sort of swallowed up by this big ominous sound. 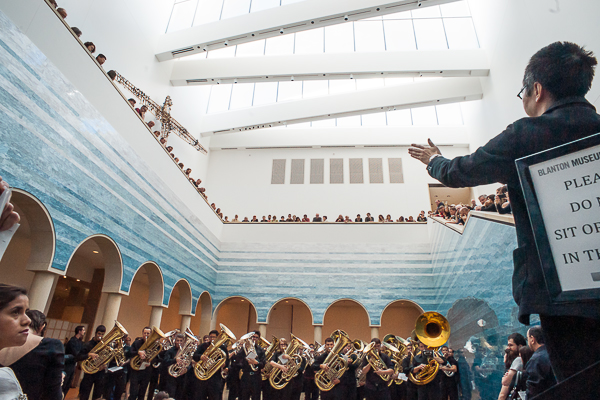 Once assembled in rows on the ground floor, the mass of tubas initially headed by Fei split into three groups headed by Prosser, Stonaker, and Sanders. The groups faced in different directions and spent several minutes trading fours, each guided by their conductor who gave hand signals indicating what to play. Low growls, sub-tones, and the occasional squeal emanated from each of the groups, and after about ten minutes the conductors and their charges slowly but surely made their way outside followed by the audience in an uncanny Pied Piper impression [2]. Outside, the work truly took shape in the large courtyard. Over the next half hour the groups moved around the large outdoor space, finally finding a venue that matched their size and sound. The large, slow, thick harmonies were occasionally interrupted by sharp interjections as ensemble mixed with audience, and when the final chord died it was replaced by applause as loud as the work itself, if not quite as long.

The work mimicked the events of the entire day. Not simply because it was a day of pieces utilizing graphic notation, but because it was presented such that one could have a shared experience and a personal one, evident as each member of the audience chose how and where to watch and listen. Of course, one can have a shared/personal experience while seated in the concert hall as well, but your ability to control your destiny is modest, and this is where the SoundSpace concept really shines. This installment was particularly compelling as that individuality was expanded from the audience to encompass the performers as well, whose personalities could shine through the unconventional scores before them. To be sure, the various notation systems on display were as different as the composers who used them, but they have in common the function of drawing from their readers a personal and individual touch. While this holds true with conventional notation as well, the degree to which performers may shape the music is attenuated and two performances will likely be more similar than not. What makes graphic notation so interesting is that it lays bare the truth behind conventional notation, music and otherwise, which is that it’s all open for interpretation. The reality of cooperation between the composer and performer is amplified and, in the case of the SoundSpace audience, we’re all better for it.

2. It also had a bit of a “breaking the fourth wall” vibe, like when the cowboys burst in on The French Mistake at the end of Blazing Saddles except without all the fighting and top hats. I think it was the sheer scale of the thing…so many tubas.