Weekly composing homework? Yes, please. For anyone intrigued by the sonic ideas this type of exercise can generate, your spelunking down the Disquiet Junto rabbit hole is sure to be rewarded. Even for those who don’t want to wade in and create music themselves, with 88 projects already completed, the curious listener has a cavernous library to select from.

Dear Members of the Disquiet Junto,
This week’s project focuses on the spatial aspect of sound. The instructions are as follows… 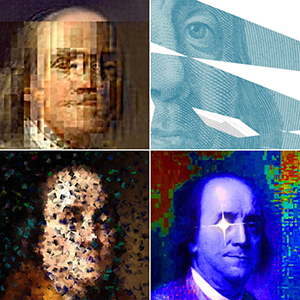 It is Franklin’s own Junto Society that provided the name for this association. Image courtesy Disquiet.com

On Thursday night, I get an email from the Disquiet Junto group on SoundCloud. It’s a homework assignment I know I will not complete by its Monday deadline, but one that fascinates me nonetheless. It’s also one I know will result in the creation of many tracks of new music built by others.

If this sounds intriguing to you, you can join in at any time—anyone can participate, no application necessary. There are just a few rules and simple guidelines to ease everyone into the party.

Even for those who don’t want to wade in and create music themselves, with 88 projects already completed, the curious listener has a cavernous library to select from (and ample shared process notes from each track creator to get lost in). More files are being added each week.

It would be difficult, if not impossible, to select for you any kind of “best of” representative mix from this project, but for anyone intrigued by the sonic ideas this type of exercise can generate, your spelunking down the Disquiet Junto rabbit hole is sure to be rewarded. When you stumble on something special, please share it in the comments!
Drowning in options, I decided to start with some personally intriguing assignments and work from there. We begin at the beginning, a very good—if chilly—place to start. Access the full assignment details and track notes by clicking through to each file’s SoundCloud page.
Assignment #1: Ice Cubes

Assignment #56: Make music from the sound of the tick of a clock.

Assignment #57: Use sounds from the Phonetics Lab Archive at UCLA to depict emotions.

Molly Sheridan: You win the gold star for the most creatively stimulating homework assignments I have ever encountered. What took the Disquiet Junto from neat idea to actually happening project?

Marc Weidenbaum: Thanks! That’s super generous of you. The enthusiasm of the participants, who come back week after week, is what has made the Disquiet Junto happen: their music, their ideas, their energy, their generosity. I’m afraid to say that had the first project not been so warmly received—40-plus participants joined in, if memory serves—I might not have had the nerve to do a second. Instead, we hit the ground running, and we haven’t stopped since, one week after the next.

MS: Let’s quantify this image. Can you throw some fun numbers at me—number of participants since the project started, number of tracks, hours of music created, number of plays and comments gathered—that sort of thing? How many people does it take to run this machine or does the machine provide the tools on its own?

MW: Sure thing. Here are some numerical accountings of our goings-on, as of September 4, 2013:

MS: You’re the Junto founder/moderator, but are you also an active participant?

MW: I believe I’ve only participated in the Disquiet Junto once, for a project called “audiobiography,” the 60th, back in March 2013. I don’t really make much music, myself, in the direct sense, though I think the projects themselves count as a kind of music-making, in a meta sense. I do fiddle with music at home. I play with iOS and Android apps—at some point I may even upload some super minimal rhythmic work I’ve been up to. I used to make pause tapes in my teens. I had two turntables and a mixer until my kid was born. I do a lot of push-button, straightforward reworking of existing material—like, I enjoy running instrumental hip-hop through the Automaton plug-in from Audio Damage. But I think of much of that as “active listening” more than as music-making. And with only a few exceptions, the Junto projects have been way, way beyond my meager ability level. This whole thing comes out of my experience as an editor of arts/culture journalism and of comics, both of which I have done a lot of: I assign work I could not myself accomplish.

MS: While I haven’t participated myself, it’s been my impression that the restriction provided by the assignment is key but that discussion of the employed method(s), a sort of “show your work,” is also central. There’s an outsider input and public process to the music making. Even though we often talk about the digital cocooning that new technologies allow, this is a reversal of that in some ways through technology—bringing others into what is often normally a private creative space for just one artist.
MW: Yeah, I agree entirely. I think three key things are essential to the Junto’s success. The restraints and the deadline are big, but so too is the knowledge that not just an audience but an audience of peers is at the ready: to listen, give feedback, befriend, collaborate with. As for the “through technology,” as you put it, absolutely: this project exists specifically as a means of utilizing the SoundCloud interface. I’m not saying it would not have existed otherwise, but it exists as it does to make the best use of that virtual public space as SoundCloud both intentionally and unintentionally happened to have designed it.

MS: Where does the Junto project, both the structure of it and the work coming out of it, stand in relation to other music in the 2013 landscape? It strikes me that it touches so many current anxieties and obsessions: remix culture, social media, transparency, collective action, crowd sourcing.

MW: One person’s anxieties are another’s enthusiasms. The Disquiet Junto is the most “fluid” and “immediate” work I have ever done, and I think fluidity and immediacy are common factors in the various phenomena you list. A key distinction I’d add is that the Junto is often as much about sound as it is about music, or about music as a subset and/or adversary of sound, and about both sound and music being a means to explore ideas non-verbally.
MS: The concept has since moved offline through some concert organizing and such. I haven’t heard a live event, but I can see how that might generate some conceptual tensions. Is the Disquiet Junto bigger, or at least about more, than the sum of its online parts?
MW: I like to think that the SoundCloud Disquiet Junto presence is a home, not a family. The Junto members can go other places from time to time and be a family there, too. Those can be virtual places, like YouTube and Vine, and they can be physical places, like concert halls and art galleries.

MS: No one is making any money here, correct? No albums made and sold, created content shared to varying degrees (depending on the assignments and the participants). Considering its collaborative nature, can things like ownership and revenue generation co-exist here or is this space not for those end goals.

MW: Some small amount of money has been made here and there, though making money is at best a quaternary aspect of the Disquiet Junto. We charged a small ticket price at some of the concerts, though others were free admission. Some people have released some of their tracks commercially. SoundCloud gets money from those who elect for a higher grade of account. More likely the projects have refined and expanded the skills of the participants, myself as moderator included, and that experience perhaps has helped people economically elsewhere. As for the Creative Commons matter, we have not engaged with some projects because of financial concerns—for example, there was a cool band that did an open remix project, but the band stipulated that it retain the full, rather than shared, copyright of the remix, and that seems unfair, so I didn’t proceed with it. Though I’m still thinking about it. Did I mention this is all fluid? See, while making money is not a focus of the Disquiet Junto, commerce—the exchange of ideas, culture, technology—is.