Listening to Robert Erickson’s quartets brings to mind the image of an onion: at first glance, an onion is, well, an onion—basic and non-threatening. But as each layer is peeled away, the onion becomes more pungent and affects the person peeling it with greater, often times uncontrollable intensity. 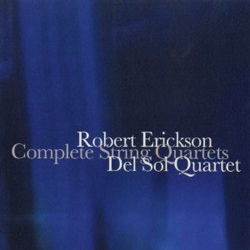 
Listening to his quartets brings to mind the image of an onion: at first glance, an onion is, well, an onion—basic and non-threatening. But as each layer is peeled away, the onion becomes more pungent and affects the person peeling it with greater, often times uncontrollable intensity. This gradient is sharply noticeable in Erickson’s quartets. Though everyone experiences music and sound differently, for me his debut quartet, completed in 1950, is an unpeeled onion on the kitchen counter. This is not to say the piece, organized in three movements and written using traditional methods of counterpoint and twelve-tone harmony, is not interesting; after all, the best sauces use onion, and Erickson’s first quartet has its moments of brilliance. But the piece is strict, uptight, and highly cerebral.

Over the next six years, Erickson only finished a handful of works, juggling teaching commitments, a stint on KPFA radio, writing a book, and moving around the country. But at the end of this period, he emerged transformed as a composer with his Second String Quartet (1956). Immediately this quartet pushes past the limitations of the first and expresses a greater confidence in the idiom. As Erickson’s student and biographer Charles Shere points out in the set’s accompanying program notes, “Where the conversations of the First Quartet had been contrapuntal, direct, like rational and logical disputations proceeding toward a logical outcome, those of the Second Quartet are fanciful, exploratory, playful, and not so rule-bound.”

For the next three decades, Erickson composed for a wide variety of ensembles as well as for electronics but did not return to the string quartet until Solstice, completed in 1985. A radical departure from the first and even the second quartet, it is comprised of drones and meandering lines reminiscent of an Indian raga or Middle Eastern music, meeting in powerful unisons across all four instruments but only fleetingly before one instrument leaps away to a soaring harmonic or teases with a seductive melody. One such instance is at c. 3’44”, when the instruments compound into a seemingly impenetrable wall of octaves from which an evocative solo voice emerges, pristine. Unrestrained by any traditional form or counterpoint, Erickson communicates his musical ideas every which way—powerfully, playfully, viscerally. Though he had stated that Solstice is not program music, there are reflections of the definition of a solstice (i.e. either the longest or shortest day in the year) in the interplay of short, melodic gestures and seemingly endless drones.
Finally, there is Corfu. Written just a year after Solstice, Erickson’s last composition for string quartet functions as both a seamless continuation of Solstice and as an independent creation. Corfu moans. Its harmonics jump off the fingerboard, constantly pushing the notes higher and higher, all within an extremely stripped-back, naked context. One particularly striking moment is c. 20’36” when, out of nowhere, the violin springs to a staggeringly high note and the cello sounds like a machine grinding to a halt. The harmonies are awfully dissonant and tense until a lower voice releases the tension and the piece fades to a close. Like a white dwarf that remains after the implosion of a star, the piece’s concluding gesture—which not only ends Corfu but Erickson’s entire exploration of the medium—transcends the double bar line, its residual energy lingering long after the music ceases.