Meredith Monk: Piano Songs, a new compilation performed by Ursula Oppens and Bruce Brubaker, features music that finds expressive possibilities in the act of moderating between extremes. Old and new, traditional and experimental, memory and transformation–within all those competing forces, Monk’s music seems to hover at a point of balance.

A couple weeks ago, on Twitter, Alex Temple cut to the chase:

The piano’s most distinctive characteristics—its gratifyingly hammered attack and its koan-like decay—are undeniably bewitching, so much so that a century’s worth of music has piled up devoted to exploring one extreme or the other. (More than a century, really—the difference between early Liszt and late Liszt is, in large part, the difference between fast notes and slow notes.) But you can still run into piano music that takes the middle path, as it were. Meredith Monk: Piano Songs, a new compilation performed by Ursula Oppens and Bruce Brubaker, is one such cache: music that is expressively moderate, which is to say, it finds expressive possibilities in the act of moderating between extremes. 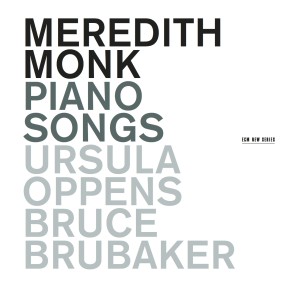 Monk’s most notable mediation is between the poles of minimalist repetition and modernist continuous variation. The music is almost always ostinato-based, and each piece maintains a pretty consistent mood and modality; but different melodic cells come and go, the tiles get slightly bigger or smaller, the texture will stack up in layers only to circle back to sparseness—there’s a kind of Brownian motion built into even the simplest structures. Instead of sitting in her rooms, Monk moves through them. It lends shorter pieces, like the shuffling, unsettled “Tower,” a certain density and longer pieces, like the bright and determined “Parlour Games,” a sense of travel, of considerable covered ground, even as the themes recapitulate and round off.
There’s also give-and-take between strict, locked-in musical processes and a more unpredictable theatrical sensibility. “Urban march (shadow)” is understated, gray, then suddenly accelerating into a crush of flinty, crunchy harmonies. “Paris” throws a brash tumble of pawed clusters into the midst of its Satie-like leisure. “Folkdance” opens with rustic flair—the pianists clapping and shouting in mutual accompaniment—balancing the level of sophisticated harmonic polish that emerges by the end. Monk is an indelibly dramatic composer: not melodramatic or grandiose, but rather attuned to the rhythms of entrances and exits, expositions and reveals.


This collection is, at least partially, a cover album—the swaying, vaguely jazzy “Windows in 7’s,” for instance, composed for pianist Nurit Tilles, first appeared on Monk’s album Do You Be; “St. Petersburg Waltz” (also written for Tilles) was on Volcano Songs. Four of the selections—“Tower” (the earliest piece here, from 1971), “Parlour Games,” “urban march (shadow)” (from the opera mercy), and “totentanz” (from the album Impermanence)—were arranged by Brubaker. Given such a range of vintages and sources, the collection proves remarkably cohesive. And much of that, I think, is Monk’s inclination to use the piano as a tool, a means to an end, the sound of it a vehicle for ideas; the pieces refracted through the piano are congruent with the pieces conceived for it.

But, then again, the whole album sounds, at the same time, completely idiomatic. The timbre suits the music, and the music suits the timbre; throughout, Oppens and Brubaker find ample opportunity for expressive variations of touch and tempo. (The recording sessions came after a concert performance of the same program in Boston’s Jordan Hall, and at least a little of that live, why-not interpretive freedom made it on to the recording.) In the liner notes, Monk cites Mompou, Satie, and Bartók as early favorites, and all might be heard to be putting in guest appearances: Mompou’s haze in the “St. Petersburg Waltz,” Satie’s lazy insouciance in “Paris.” The oldest influence, Bartók’s resonant dissonance, pervades “totentanz,” the most recent music on the recording. Old and new, traditional and experimental, memory and transformation always appear as dance partners. Within all those competing forces, Monk’s music seems to hover at a point of balance.