This week we round up three new recordings by large ensembles of various configurations.

Kevin Puts: To Touch The Sky, If I Were A Swan, Symphony No. 4 “From Mission San Juan”
Harmonia Mundi
Performed by Conspirare (Craig Hella Johnson, cond.) and Baltimore Symphony Orchestra (Marin Alsop, cond.) 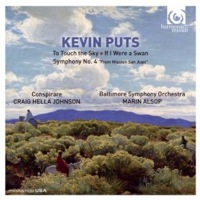 The works on this recording by composer Kevin Puts share common inspiration in that they are all treatments of spiritual concepts such as ideas of the “divine feminine.” The interconnected movements of To Touch The Sky: Nine Songs for Unaccompanied Chorus on Texts by Women are stunningly performed by Conspirare, featuring texts ranging from Sappho to Mother Teresa of Calcutta. Although the opening track, If I Were A Swan, with text by poet Fleda Brown (who also happens to be Puts’s aunt) was originally intended to be part of the sequence, Puts ultimately chose to have it stand on its own. Symphony No. 4 “From Mission San Juan” was commissioned by an avid listener and attendee of the Cabrillo Festival, who was especially enamored with the annual concerts that take place at San Juan Bautista. Puts took that opportunity to delve into the music of the Mutsun Indians, who, despite being baptized and taught to sing church music by the friars of Mission San Juan, managed to retain their own musical practices for some time. The first movement of Symphony No. 4 (featured in the track below), performed by the Baltimore Symphony Orchestra with Marin Alsop conducting, uses the unique acoustics of the Mission space as an inspirational stepping-stone. 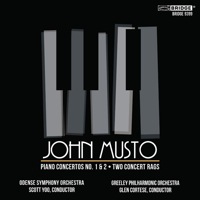 Over the past ten years in particular, composer John Musto has been busy with opera productions and vocal music, but this recent Bridge CD features Musto’s two piano concertos—the first dating from 1988, and the second from 2006—with the composer himself at the piano. Throughout each concerto, Musto’s affinity for ragtime can be heard within the harmonic language and the melodic lines. In fact, sandwiched between the two big pieces are two short solo piano works from Musto’s Five Concert Rags, further inquiries into such musical connections. The third movement of Piano Concerto No. 1, Scorrevole (featured here), is a roller coaster ride for the ears, bustling with ever-shifting orchestra textures and rollicking percussion. 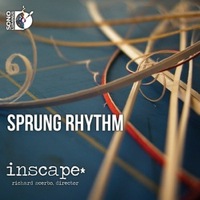 This debut recording of the Bethesda, Maryland-based inscape chamber orchestra showcases the work of the three younger composers from the mid-Atlantic region—Nathan Lincoln-DeCusatis, Joseph Hallman, and Justin Boyer. The ensemble expands and contracts to adjust for the unique voice of each composer, from chamber orchestra for Lincoln-DeCusatis’ A Collection of Sand, to smaller mixed ensemble for Hallman’s imaginatively orchestrated imagined landscapes: six Lovecraftian elsewheres. For those who want to put their surround sound systems to work, the physical CD comes packaged with an additional audio-only Blu-Ray disc containing all of the compositions, plus additional bonus tracks featuring Boyer’s work Auguries for bassoon and string trio. Whichever recorded medium you decide to explore, these are all interesting musical works, expertly recorded, and performed by inscape with confidence and dexterity. The label Sono Luminus has smartly created a mashup of the works on this recording, which is presented below: