This selection of chamber works composed between 1993 and 2008 suggest that Becker has an “on/off” switch resulting in either intensely energetic music, or in work of concentrated repose. There isn’t a lot in-between, but clearly such extremes suit the composer. 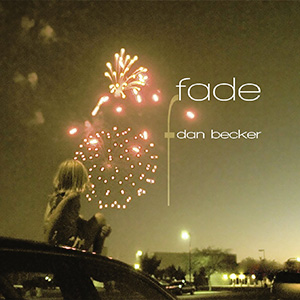 The title of Dan Becker’s album Fade is named after one of its tracks, yet it doesn’t begin to disclose the manic sense of drive present in much of the music. This selection of chamber works composed between 1993 and 2008 suggests that Becker has an “on/off” switch resulting in either intensely energetic music or in work of concentrated repose. There isn’t a lot in-between, but clearly such extremes suit the composer, who according to the liner notes, is consumed by the idea of processes—both musical and otherwise—unfolding around him at all times.

Farthest to the “on” side of the spectrum are his Five ReInventions, which redress the two-part inventions by J. S. Bach in post-minimalist garb and set them for Disklavier á la Conlon Nancarrow at can’t-be-performed-by-normal-humans speeds. Other works that will make you consider skipping your morning coffee are the adrenaline-infused Gridlock, given a focused, enthusiastic performance by the Common Sense Ensemble, the second movement of Keeping Time, performed by The New Millennium Ensemble, and the final work, A Dream of Waking, for NME members Sunghae Anna Lim on violin, and Margaret Kampmeier on piano.

The title track, Fade, falls to the other edge of Becker’s compositional style; it is gentle, delicate music that walks on eggshells, ideal for laying in a hammock on a warm summer day. Similarly, the first movement of Keeping Time is a slowly measured dance through sparkling layers of vibraphone, piano, bass clarinet and strings. The excellent production by Judith Sherman makes all of the evocative works on the album glow, and delivers a satisfying punch in just the right places.