Among the CDs that have landed on my desk in recent weeks are a few that showcase flute prominently. Here are three artists whose highly individual styles of integrating flute into their compositions perked up my ears. 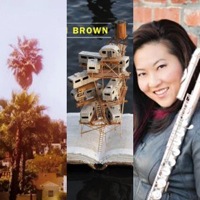 Among the CDs that have landed on my desk in recent weeks are a few that showcase flute prominently. Here are three artists whose highly individual styles of integrating flute into their compositions perked up my ears.
Elizabeth Brown, Arcana
Performed by Elizabeth Brown
Mirage
New World

Composer/flutist Elizabeth Brown is aptly described in the liner notes of her recent CD Mirage as a “gentle maverick.” Her work is experimental in nature, yet rather than whacking the listener over the head with that, the music has an understated and beautifully handmade feel that begs careful listening and exploration. Brown is a talented flutist as well as a shakuhachi and theremin player, and within the disc’s seven works she performs on those instruments in combination with ensembles that include string quartet, recorded sound, Harry Partch instruments, and Japanese traditional instrument orchestra. The track featured here, Arcana, for flute and recorded sound, is full of bending, melting sounds that suggest a dreamlike tale of intrigue.

Harris Eisenstadt’s Golden State features the somewhat unusual instrumental combination of flute, bassoon, contrabass, and drums. I was immediately struck by the pointillistic style of drumming that opens a number of the tracks—as if Eisenstadt (who is performing on drums) is reveling in the individual sound world of each drum or cymbal—and by the pleasantly quirky, occasionally stuttering, restless nature of the woodwind writing, not to mention the casual sprinkling of extended techniques through the pieces. What Is A Straw Horse, Anyways? combines all of these elements into an engaging (and fun!) musical statement.
*
Matthew Joseph Payne, flight of the bleeper bird: obviously I was abducted by paper aliens
Performed by Meerenai Shim
The Art of Noise

As an unrepentant fan of most things “bloop-bleep”-oriented, I couldn’t resist Matthew Joseph Payne’s work flight of the bleeper bird for flute and Game Boy on flutist Meerenai Shim’s compilation album The Art of Noise. The second movement, entitled “obviously I’ve been abducted by paper aliens,” opens with a somewhat “typically contemporary music flute-y” melodic line, but is quickly enveloped by cascading waves of electronic tones, transforming into a gleefully bouncing, frenetic duet. Anyone needing a fix of well-honed music derived from electronic game sounds should have a listen.

And while you’re at it, give the whole CD a spin—the four other thoughtfully constructed and well-performed works on The Art of Noise, which also deliver doses of cello, piano, and percussion in addition to Shim’s flute, were composed by Daniel Felsenfeld, Janice Misurell-Mitchell, Jay C. Batzner, and David E. Farrell.