I can’t think of another composer who manages, again and again, to create such an inverse relationship between the bald simplicity of the compositional plan and the crazy richness of the musical result. The more basic Lucier’s hypothesis—the more abstract the map—the more inexhaustible the experience. 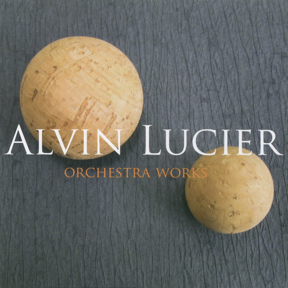 When David Lean’s 1962 epic Lawrence of Arabia was restored in 1989, one of the best shots rescued from the vaults was a seemingly inconsequential one, a shot showing exactly what it is T. E. Lawrence (played by Peter O’Toole) is doing in the dank Cairo office where he has been initially stationed during the First World War: he is drawing a map. In fact, a close look at the shot in question—Lawrence’s hand carefully laying down a line of blue watercolor along a coast—reveals that he is drawing a map of the Gulf of Aqaba. It is the capture of Aqaba that turns out to be Lawrence’s first great military accomplishment, a feat that sets in motion the movie’s whirlwind of triumph and trauma. The clean boundaries laid down on paper turn out, in cinematic reality, to chart a glorious, horrible, bright, dark, vast panorama.

I thought of Lawrence’s mapmaking while listening to this new recording of some of Alvin Lucier’s orchestral music. I can’t think of another composer who manages, again and again, to create such an inverse relationship between the bald simplicity of the compositional plan and the crazy richness of the musical result. The more basic Lucier’s hypothesis—the more abstract the map—the more inexhaustible the experience.


The three works on this new release are especially straightforward and, thus, especially grand. Diamonds (for one to three orchestras, or one orchestra divided in three) is nothing but the title shape: one group of instruments ever-so-slowly swoops up and then down, while another group mirrors it, a shape presented in three overlapping iterations over twenty-plus minutes. Slices presents a sustained 53-note chromatic cluster in the orchestra; a solo cello works its way through all 53 one at a time, switching the corresponding ensemble note off, then works through all 53 again, switching the notes back on—a process repeated, in varied order, seven times. Exploration of the House revisits the playback-feedback acoustic winnowing of Lucier’s most famous piece, I Am Sitting in a Room, but with the source material being a live orchestra playing fragments of Beethoven’s Consecration of the House overture. Each fragment is recorded as it is performed, then sent back into the hall and re-recorded, until the acoustic signature of the space is all that’s left. In all three pieces, as in so much of Lucier’s music, the schematic is so obvious as to immediately disappear, leaving instead the repeated opportunity to focus one’s attention on what is normally so plain in music—individual notes, phrases, timbres—and realize just how restrictively framed one’s normal perception of those artifacts usually is.
The Janáček Philharmonic Orchestra (conducted by Christian Arming, Petr Kotik, and Zsolt Nagy) gives Diamonds a near-constant shimmer and scintillation, the microtonal collisions of passing glissandi seeming to open up a kind of infinite zoom into the nature of the sound. Members of the San Diego Symphony fill in the pre-recorded 53-note cluster in Slices, with Kotik conducting and Charles Curtis on cello—in an act of added devotion, each of the 53 instruments were recorded individually, then mixed together to maximize the sonic redolence. Kotik fashions the fragments of Exploration of the House as brisk, starched Classical-era swatches, the better to contrast with their transformation into hazy bells.

We take a lot of what goes on in music for granted, and, often, with good reason: the abstraction to more hierarchical listening is the gateway to a lot of the large-scale dramatic conceptions—triadic progressions, standard forms, dialectic give-and-take among instruments—whose by now traditional nature sometimes can disguise their continuing effectiveness. But Lucier’s music is a counterweight to all that, a useful exercise that is no less dramatic in its own way. Music history has privileged the global view. But Lucier, sitting in a room, drawing maps, is showing travelers the path to landscapes that, once moved off the paper, prove unexpectedly limitless and uncanny.