In celebration of the 20th anniversary of the Emerald Necklace Conservancy, curator Jen Mergel commissioned Nakaya to create five site-responsive fog sculptures to be installed along Boston’s Emerald Necklace, a five-and-a-half-mile chain of parks designed by Frederick Law Olmsted (FLO). Experiencing the sculptures is immersive and wet. Changes in the wind, humidity, temperature, and light transform the sculptures. Speaking of her work, Nakaya says, “The atmosphere is my mold and the wind is my chisel to sculpt in real time.” The exhibition, titled Fog x FLO: Fujiko Nakaya on the Emerald Necklace turns the 1,100-acre Emerald Necklace park system into a platform for artistic creation, celebrating both Olmsted’s foresight to connect the city with greenspace and Nakaya’s fifty-year practice. The exhibit included an open call for artists to propose on-site interventions, in response to Nakaya’s sculptures. Fog x FLO is a first for Boston and Nakaya’s most expansive exhibition in her 50-year career. It is expected to attract more than 800,000 visitors over twelve weeks.

I experienced Nakaya’s work before we ever met. In 2014, I wrote about the futuristic Pepsi Pavilion which was covered by a fog veil of Nakaya’s design and created by the group Experiments in Art and Technology (E.A.T.) for Expo ’70, Osaka. In 2017, I saw Nakaya’s mesmerizing performance collaboration with Shiro Takatani, composer Ryuichi Sakamoto, and dancer Min Tanaka at Ten Days Six Nights at the Tate Modern. Nakaya also saw my performance with Phill Niblock the following day at the same festival. On the eve of her arrival in Boston from Tokyo in February 2018, Nakaya came to my concert at the ICA Boston called “Sounding the Cloud,” with Scanner and Stephen Vitiello. By April, when Nakaya again visited me, we already had a clear understanding of each other’s practice. She invited me to create sound for her Fog x FLO fog sculpture at the Overlook Shelter Ruins, a pavilion designed by Olmsted that was destroyed by fire in the 1940s, leaving only the stone remains. 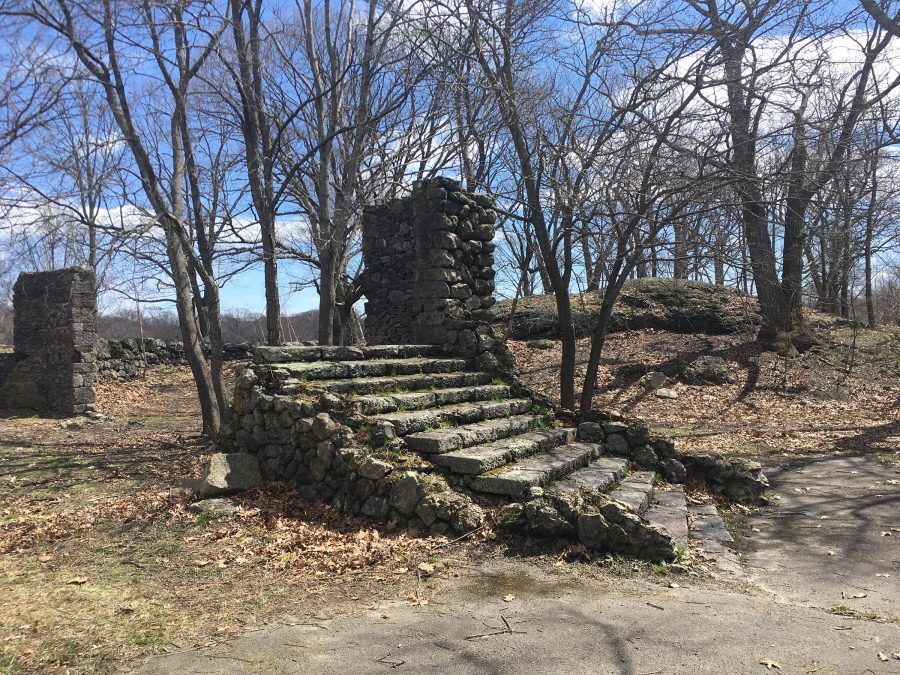 For me, the Overlook Shelter Ruins are the Necklace’s most evocative site for an installation. The remaining stone archway feels like a timeless relic. Three stairways that once flanked the building’s entrance now lead to open sky. The corner walls are overgrown with wild foliage. An added allure is that, beginning in 1966, the ruins were used by famed Bostonian Elma Lewis to host annual concerts by the Duke Ellington Orchestra. I imagined the sound of Ellington’s reed section lingering in the air. Lead alto saxophonist Johnny Hodges and baritone saxophonist Harry Carney, both born within miles of the ruins, probably played with Ellington on-site. I’ve spent countless hours in Franklin Park and the nearby Arnold Arboretum. These are parks where I fell in love, taught my son to bike, and still visit to replenish myself. The commission became an opportunity to revisit the personal importance of Olmsted, Ellington, and E.A.T. 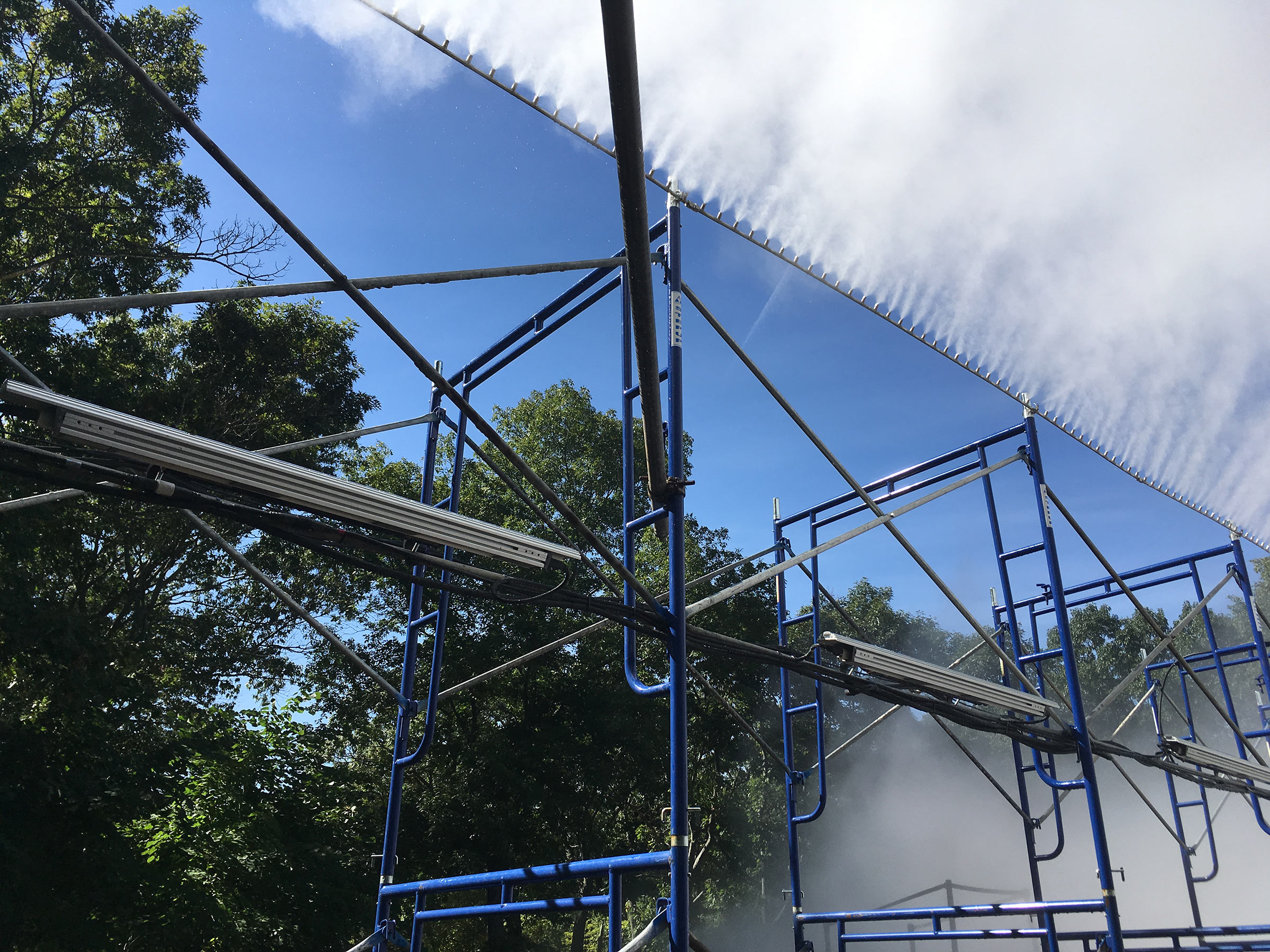 The size of this installation, production logistics, and changing weather presented a number of challenges and opportunities. For Fog x Ruins, Nakaya designed a 96 x 40-foot rectangular structure comprising scaffolding and an array of 900 mist nozzles perched atop the perimeter. A nearby fire hydrant emits a 90-PSI stream of water, regulated by computer-controlled pumps, to produce cycles of fog that intensify for a minute or two and then stop entirely, allowing for the fog to dissipate. When visitors walk into this pavilion, they see their friends disappear in the mist, strangers emerge, a ceiling of fog above obscures the sky. Takatani’s lighting design gives the sculpture a spectacular presence as night falls.

Creating sound for a large outdoor installation has been a dream of mine for years. This installation was a challenge because there were a lot of unknowns, including elements that could not be tested until the sculpture was finished and I could hear my audio on location with the fog. I also knew that the timing of fog and light projections were subject to change, even after I finished the music.

As composing started, I sought to link Ellington and Nakaya’s work. I listened to related themes by Ellington, including Lady of the Lavender Mist, The Kissing Mist, Atmosphere (Moon Mist), A Blue Fog That You Can Almost See Through (Transblucency), and The Fog That Clouds It (Schwiphti). I chose the first three ethereal chords of Lady of the Lavender Mist as a point of departure for writing the music. 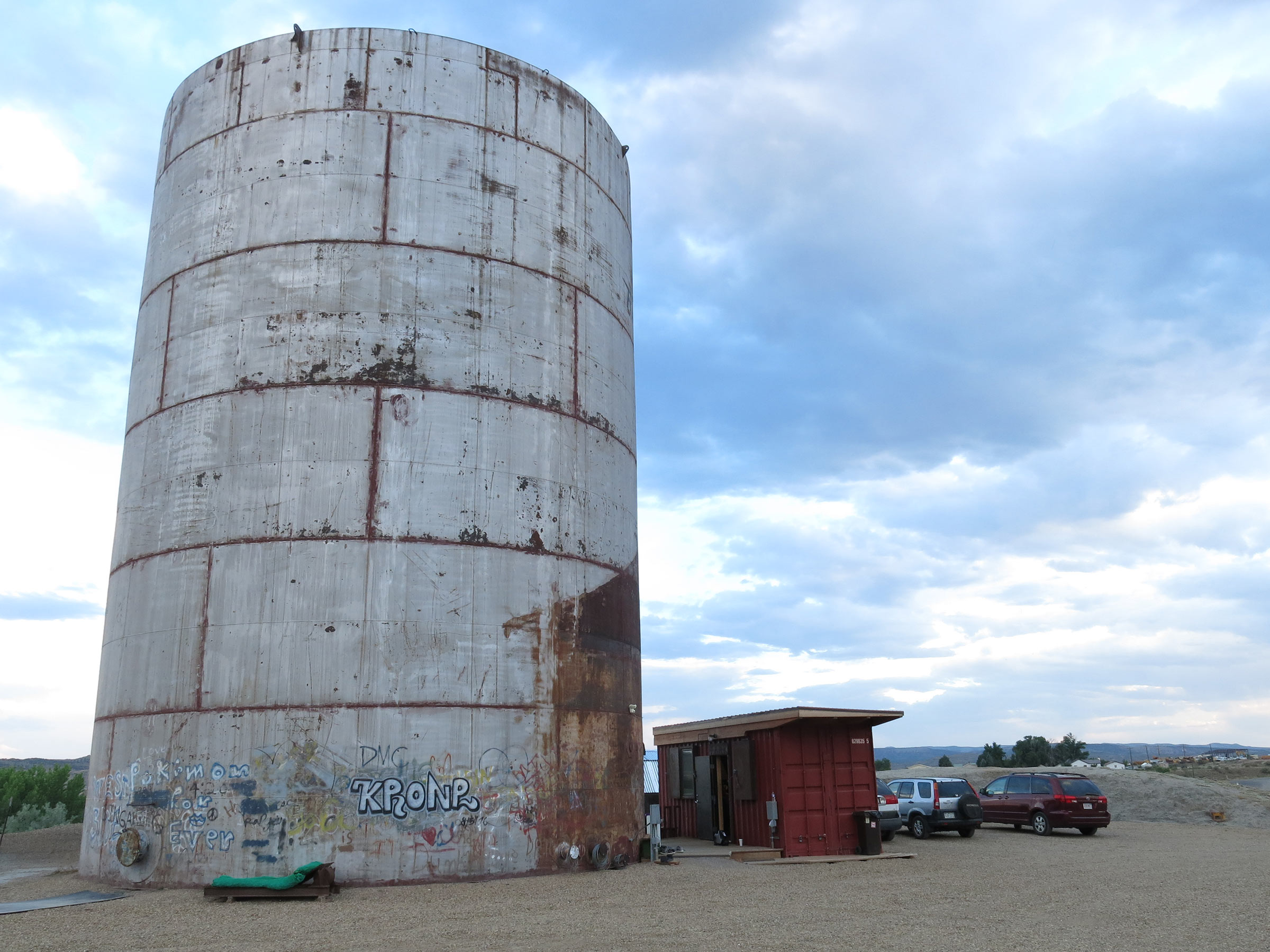 For this project, I booked a five-day recording session at the Tank, a 65-foot-tall empty metal water treatment tank in Langley, Colorado. The Tank has a convex floor, concave roof, cylindrical walls, and a 40-second reverb. A container just outside the Tank is outfitted with recording gear. The size of the Tank expands and contracts based on temperature changes. Heat, windstorms, howling dogs, and the noise of trucks dictated when I could record. However, when conditions were right, I heard saxophone notes linger in the cavernous space above like a cloud of sound, with specific harmonics coming in and out of focus. The room responds like an old band mate who knows your music well and plays your performance back in harmonic variations.

Engineer Bob E. Burnham came on the final day and set up four stereo pairs of microphones surrounding the saxophone. We multi-tracked both alto and tenor parts to get more of an ensemble sound. I thought of the audio recording process as something like a four-camera shoot. The four mics could be used to construct a 360-degree panoramic sound field, or used individually to highlight specific angles of listening. My thinking was to create a quadraphonic piece surrounding listeners inside the fog, where the alto saxophone played from one end of the sculpture and tenor played from the opposite side. Much of the actual sound of the saxophone would be edited out, and the resonant harmonies of multiple notes lingering in the Tank would be emphasized.

In the end, I composed a fifteen-minute quadraphonic piece to play at the Overlook Shelter Ruins. I used waterproof JBL speaker arrays placed in the four corners of the structure. There are no electronic effects on the saxophone and, as visitors wander freely inside the structure, there is no “best” listening point. In that way, the listening space is designed after my experience in the Tank.

At our first sound check, presenting the draft with pride, Nakaya responded, “It is so serene. Should I make the fog more serene?” At first, I admittedly took this to be her way of saying, “Not turbulent enough.” During the same auditions, Mergel pointed to the perimeter of the scaffolding where nozzles cut a line of fog upward and wondered if the sound could reflect the contrast of solid architectural shapes and soft ethereal droplets. Listening to Nakaya and Mergel, I added vignettes of impulsive computer-regulated clicking and noise bursts that gave a sense of turbulence, which Mergel equated with “an Arctic icebreaker cutting through.” In the end, Nakaya requested that the sound be extended from the originally planned sunset hours and be heard for the entire day as an “integral part” of the collaborative work. It also turned out that the music was not subordinate to the fog. As Nakaya noted, when the cloud is thickest, “the sound gives a form to the installation.”

Despite having done a number of outdoor projects, this was my first opportunity to create sound for a long-duration, outdoor piece in a widely accessible urban site. As much as any work I have been involved with, the audience is in dialog with the art. Some visitors return daily, while others make a single pilgrimage to the site. I hear them talk about their experience amongst themselves. As Mergel has noticed, “While Nakaya’s fog is set at the former roofline of the building to float like a cloud dome that fills the space, Leonard’s clarion sax sounds in Lavender Ruins reverberate on invisible walls, surrounding us with echoing generations of genius: of Olmsted, Ellington, Nakaya, and Leonard, the past and future fading into each other.” 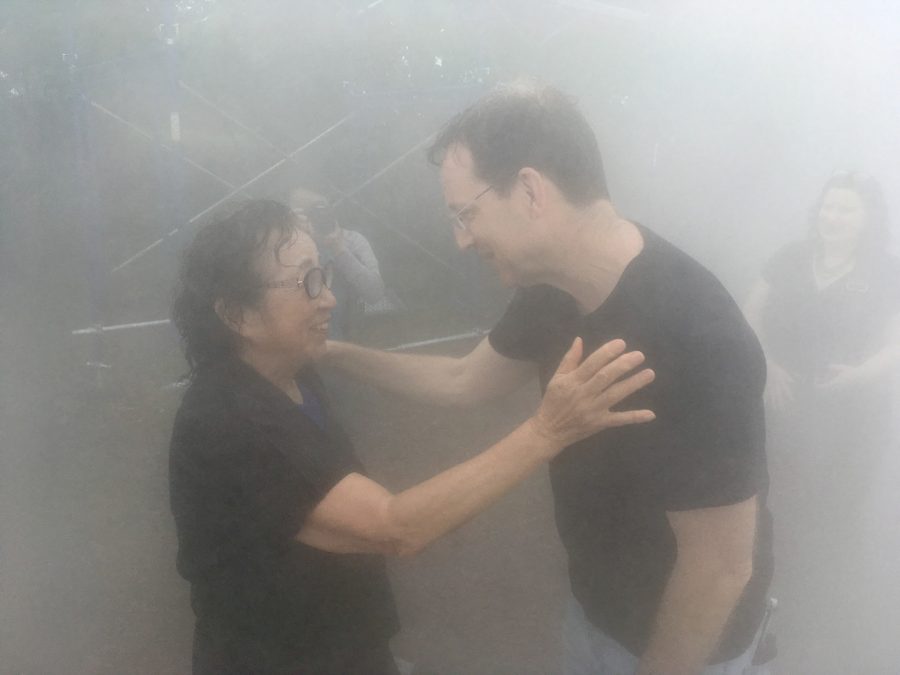 Quotes are from an email exchange with the curator on Oct 7, 2018