Soul of the Nation

The artist Boris Schatz once famously said that “art is the soul of a nation.” Working as a composer and presenter of new music in Washington, D.C., where our business is the nation, I tend to think of this phrase a lot. The artist Boris Schatz once famously said that “art is the soul of a nation.” Working as a composer and presenter of new music in Washington, D.C., where our business is the nation, I tend to think of this phrase a lot.
It may be redundant to say so at this point, but it bears repeating that new “classical” [1] music isn’t exactly a highly visible part of American culture at large (not to mention a tough way to make a living). Given the air of crisis around American classical music in general (a crisis that I, personally, find exaggerated, but that is a topic for another discussion), it seems idealistic at best, foolish at worst, to insist as I do that new music can not only play a vital role in the life of the nation, but that its role is key to the survival of classical music in the American (and, indeed, in the world’s) consciousness.

A musical life is a political life. Undertaking a life in the arts in the USA—and particularly a life in contemporary classical music—is, I would venture, an inherently political act. Ours is not to be solely purveyors of entertainment (though that is, indeed, one of our roles) but to challenge, threaten, uplift, inspire, and provide an aural experience beyond the disposably commonplace. I am not suggesting that new music [2] will or should be able to achieve the same levels of cultural hegemony (nor that it is somehow better, simply because of what it is) that more commercial forms of music are able to achieve (should we even want it to?), but it can certainly reach newer levels of cultural saturation (as it seems to be doing in a number of areas). Thankfully, there no longer seems to be much need to “apologize” for what we do, justifying it as either necessary castor oil or as no longer the uninviting quasi-noise of generations past, at least in our major metropolitan areas. (I can’t speak for the situation in smaller cities and towns away from the major new music scenes in the country.) But there is still a need for those of us who love and make this music to be increasingly proactive apologists (not apologizers, mind you) for our art and to develop radical new ways of reaching an audience that too often still feels unreachable, even while the avenues for reaching them have multiplied.

I am writing this in January 2014, having just gone through the obligatory period of begging (I’m sorry: fundraising) that occurs at the end of every calendar year. This never fails to drum up criticism and concern from various corners of our culture, criticisms that have become increasingly pervasive, especially since 2008 (just ask Bill Maher!): that the arts are not charity. We are expected to survive in the marketplace of ideas and make our money the same way that Justin Bieber, Jay-Z, Taylor Swift, and Adele make their money. To a degree, these critics are right: charity should concern itself with feeding the hungry, clothing the poor, and other, more immediately humanitarian endeavors. The fine arts should compete at the same level as popular music, Hollywood films, and mass-market teen fiction. The reality is, however, that in a society where education is valued only to the degree that it can provide quantifiable vocational skills that lead to some form of gainful employment, where citizens are unable to learn the value of knowledge for its own sake, where skills not immediately useful to industry are scorned, then not only the arts, but science and the humanities become disposable commodities to be ignored in the name of cold, hard profits. What, then, does such disposability say about the state of our nation’s soul?

Music and the other arts may not be able to feed the hungry, clothe the poor, irrigate deserts, or end oppression. They may not be particularly valuable other than as a background noise to revelry or as a source of advertising revenue. They may not even be able to keep their practitioners particularly well fed or housed, but they are as important to us–as a people, as a nation, as human beings–as the box office from the latest blockbuster film, the sale of natural gas, or the very air we breathe. To paraphrase C.S. Lewis, art may not have particular survival value, but it gives particular value to survival.

I may be becoming something of a walking cliché, a kind of “radical chic” musician who, despite appearances of open mindedness, will come off as oddly dogmatic by saying this, but I find that I have less and less use lately for people who do not value the arts as a necessary, political, socially engaged activity. If we, as composers, as musicians, as artists, want to stay clothed, fed, and housed, we must engage–radically, vociferously, loudly, uncomfortably–with the culture at large by actively playing a role in the management of our arts organizations. In this way, we might be able to free them from the constraints imposed upon them by corporate powers through strings attached to philanthropic programs, or boards of directors eager to exert disproportionate managerial power based on monetary contributions. Rather, by actively participating in governance and developing close relationships with our boards and supporters, we will be able to impose democratic values on institutions that have–like our government increasingly seems to have done–forgotten what these are. A number of ensembles in contemporary music have notably led the charge for some time, becoming their own managers and administrators, merging the concert stage with the front office.

The musicians of the International Contemporary Ensemble, eighth blackbird, Alarm Will Sound, and many others (including my own, Great Noise Ensemble) have, for some time, taken the reins of their organizations and controlled their own destiny with only a modicum of outside help. Following this model poses many challenges, chief among them striking the right balance between administrative and creative work, which itself can be complicated when you also have a day job. It is a very tricky, seemingly untenable situation that can be almost impossible to navigate until your organization is well funded enough to adequately support you and your work. If, as musicians, we see ourselves as members not only of a performing organization but as socially engaged members of a political organization, we can hopefully effect changes that will grant our art greater visibility among a wider public. We musicians cannot afford to expect our work to consist entirely of musical work. Being socially engaged begins, as it were, at home. This means taking over responsibilities that would have been the purview of an independent administrative staff in the past. When musicians take control of their business, the issues that can too often lead to fights between labor and management begin to disappear simply because labor is management.

It is telling that most of the organizations embracing this business model are in contemporary music. Much like avant-garde composers, these institutions are in the vanguard of arts management and more traditional organizations will have (and may be starting) to take notice. Until they do, they will continue to face the all-too-common lockouts, work stoppages, and endless, season-hobbling strikes. Meanwhile, those of us in the vanguard must remain strong. We must learn, like the musicians of eighth blackbird, to be our own administrators while honing our skills as performers. We must, like the soprano Megan Ihnen or Great Noise Ensemble’s own clarinetist, Katherine Kellert, develop formidable social media and publicity skills to enhance our musical work’s impact. And, like the amazing and inspiring Claire Chase and the International Contemporary Ensemble, engage in work that is greater than ourselves and our immediate social circles, developing projects to help other musicians achieve greatness. And we must see, as the founders of the Atlas Performing Arts Center in Washington saw, the potential for arts organizations to serve as anchors in the economic and social transformation of our neighborhoods, our cities, and our country. Granted, the organizations I’m citing as examples began as grass roots efforts and their members were able to institute these changes from the ground up. Things become far more challenging and difficult to implement within institutions that have been around for decades with their own, highly developed corporate cultures. Indeed, many of the crises we’ve witnessed in American orchestras of late may very well be growing pains in the transition to the new administrative model, in which musicians and management share more democratically in their organizations’ governance. Time will tell if this is the case, but I remain optimistic that we will weather this storm and come out stronger for it.

1. Part of the problem is the very label “classical music,” a label with which we’ve been saddled for about a century and which just conjures musty, dusty age to me.

2. Labeling is a persistent problem. “New Music” isn’t very useful as a genre when it can refer to any music not previously heard, regardless of genre.
*** 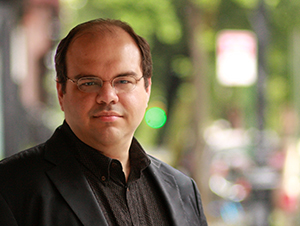 Armando Bayolo is artistic director of Great Noise Ensemble and curator of the New Music at the Atlas series, both in Washington, D.C., as well as a composer with an international reputation whose works have been performed in Europe, the Caribbean, and across the United States.