Town butchers singing traditional tavern songs? Cuban street criers advertising their wares with vocal shouts? Sometimes the naïve ear of a traveler, through curiosity or serendipity, can investigate sounds that have become commonplace to the local population. For sound artist, saxophonist, and composer Neil Leonard, his resulting sound installation work built around these observations functions as a kind of personal sonic cartography, documenting sites of social and political significance.

My recent sound installations include sonic maps documenting how global marketing impacts our listening. These pieces were made in collaboration with bartenders, biologists, street criers, and dockworkers. Sometimes my work focuses on a single sound encountered by chance. At other times, a site’s social and political significance inspires me to look for a collection of sounds that speak to the site’s history. The result has been a series of multichannel installations, comprising a plane of sound—including keynote voices, landscape recordings, and songs—that invite discussion of how social or economic change can be heard on site.

Listening to the sounds of a new culture when traveling can provide amazing starting points for a piece. Away from home, curiosity, serendipity, and naïveté lead me to investigate sounds that have become commonplace to the locals. In Padua, Italy, I stumbled across Bar Romeo, a small tavern in the center of town where butchers, dressed in blood-stained smocks, sang fantastic a cappella songs, directed by a tailor who conducted with a prosecco flute for a baton. My local musicologist and composer friends had never heard of the bar, located less than a five-minute walk from their offices. These specialists assumed that the noise from radio and TV had all but decimated the practice of amateur singing bars. When I took them to Bar Romeo, they were astonished and were not able to fully decipher the thick dialect and coded lyrics of the antiquated tavern songs. When I asked the butchers if they would collaborate on a work, they answered, “We’ll make an entire opera!” In the end, it turned out to be a much smaller work, but the piece, conceived by the naïve ear of a traveler, sparked a discussion about the city’s disappearing tavern songs—a tradition that spanned back decades, if not centuries. 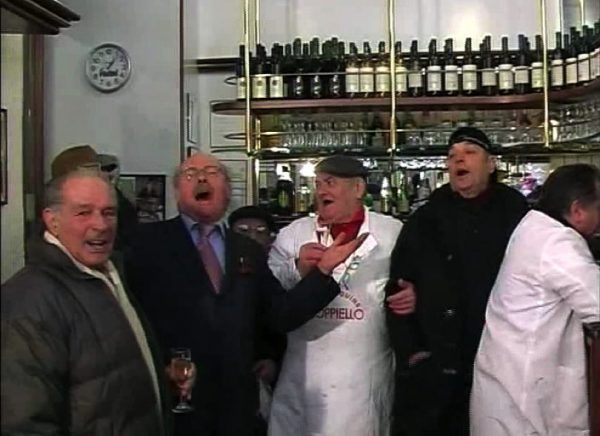 In Cuba, there is a rich tradition of popular songs about street criers (pregoneros). My father had a 78-rpm disk of Louis Armstrong singing Moisés Simons’s “El Manicero” (“Peanut Vendor”). I heard the recording when I was in elementary school and can still remember Armstrong singing “Mani!!!” then dropping the lyrics and brilliantly scat-singing in place of the original Spanish words. Simons’s lyrics feature the peanut vendor singing his pregón (cry), within the song that Simons composed for us to hear. The sheet music of “El Manicero” is reported to have sold more than a million copies. The tune helped launch the mid-20th century rumba craze in the U.S. Dozens of covers of the tune appeared on recordings. Groucho Marx whistled the tune in Duck Soup. Cary Grant sang it in Only Angels Have Wings and Judy Garland sang a bit of it in A Star is Born. Along with “Guantanamera,” “El Manicero” is one of the iconic pop songs of Cuba.

Small businesses were illegal in Cuba through most of the revolutionary era, however, causing pregoneros to discreetly hawk their goods in silence. During the substantial time I spent in Cuba starting in 1986, I cannot remember hearing a single pregonero, until one day, in 2010, I saw a distinctively oversize man riding a large tricycle down the street in Matanzas City. He pedaled under the shade of an umbrella, chanting his pregónes to sell baguettes. I started recording immediately. Next came an exterminator selling a pesticide to kill “cockroaches, ants, and mother-in-laws.” The social soundscape of the entire island had changed the minute the law permitted small businesses to re-open and processions of pregoneros, theatrically pitching products, reemerged instantly across the entire island. As a foreigner, it was striking that the locals seemed to ignore the pregoneros. Local families were focused on finding a way to afford bread or other wares. Only a foreigner had the luxury of appreciating the carnivalesque antics of the pregoneros.

A subsequent performance piece, Llego Fefa, that I created in collaboration with Cuban visual artist Maria Magdalena Campos-Pons and Havana pregoneros, made the front page of Granma, Cuba’s only national newspaper. Under a lead article featuring a photo of Raúl Castro embracing Hugo Chávez, a smaller news piece on the 11 Havana Biennial declared that our work did much to restore dignity to this core ancestral tradition, which was ignored in favor of survival needs or dismissed as an accessory to what had been a black market crime.

What I present as sonic cartography in these pieces is as much of a personal narrative, created as I survey and record a site. Back in the studio, as I assemble works, my feel for the site and associations help steer the process. I recall flinching upon hearing the almost inaudible flap of a bird’s wings darting inches above my head in an estuary at dawn. Or, struggling with my limited Italian, trying to ask a horse butcher about his songs. I remember the awe I experience upon hearing a stevedore singing songs of the docks for me from his living room sofa. My personal experience and biases are in the foreground and the work feels personal. The most satisfying moments then come as visitors hear the final map and share their own associations to the same materials. More than an accurate record of the site, the work is a dreamlike map of connections exploring our shared listening experience.